On the evening of Friday November 13th 2015, Paris was shaken by a coordinated series of extremely brutal Islamic terror attacks that left at least 129 people dead and hundreds wounded. It is strongly suspected that the Jihadist group known as the Islamic State in Iraq and Syria (ISIS) was behind these bloody attacks against multiple targets in the French capital.[1] This happened after the city had barely recovered from the Islamic massacre on the staff of the French satirical magazine Charlie Hebdo some months earlier. 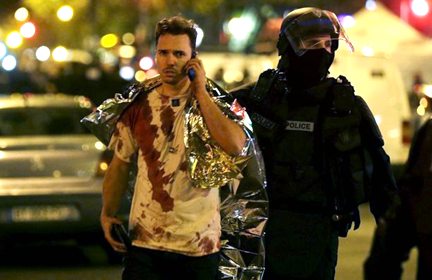 On October 31, 2015, a Russian passenger plane crashed over the Sinai Peninsula in Egypt, killing 224 people. Russian and Western intelligence services have concluded that the crash was an act of terrorism caused by a bomb.[2] Jihadists associated with the Islamic State have claimed responsibility for this terror attack. If this is true, it means that militant Muslims from the Islamic State brutally murdered more than 350 Europeans in just two weeks.

Apologists claim that Islam is a religion of peace and that Islam means peace. This is not true. The Arabic word Islam means “submission,” not peace. A Muslim is a person who submits. Technically speaking, it is true that the terms Islam and Muslim are derived from the same three-letter root (s-l-m) as the word salaam. Salaam means peace, just as shalom does in the related Semitic language Hebrew. Yet that does not mean that Islam is peaceful. On the contrary, it indicates that peace is only possible after submission to Islamic rule and Islamic law. Peace is identical with submission to Islam. The absence of sharia law is the absence of peace. Islam is therefore essentially an ideology of eternal global war. It advocates the permanent incorporation of the non-Islamic Dar al-Harb, the “House of War,” into the Dar al-Islam, the “House of Islam” or “House of Submission.” The term “House of War” indicates that all areas under non-Islamic rule are viewed as a place of war until such areas cease to exist worldwide and submit to forces which are loyal to Allah and his Prophet. Some Islamic theologians use intermediate categories where Islam is making progress, yet does not yet reign supreme. However, the basic divide in Islamic theology is between the House of War and the House of Islam.

“It follows,” wrote the Islamic scholar Majid Khadduri, professor of the Middle East Studies Program at Johns Hopkins University, “that the existence of a dar-al-harb is ultimately outlawed under the Islamic jural order; that the dar al-Islam is permanently under jihad obligation until the dar al-harb is reduced to non-existence… The universality of Islam, in all its embracing creed, is imposed on the believers as a continuous process of warfare, psychological and political if not strictly military.”[3]

Western audiences are perhaps familiar with the Muslim Brotherhood, a revivalist organization founded by Hassan al-Banna, which has included such individuals as the al-Qaida ideologue Sayyid Qutb and Abu Bakr al-Baghdadi, the leader of the Islamic State (ISIS). Abul Ala Maududi, founder of Pakistan’s Jamaat-e-Islami (Party of Islam), was also one of the most influential Islamic ideologues of the twentieth century. He explained that the objective of Jihad, Islamic Holy War, “is to eliminate the rule of an un-Islamic system and establish in its stead an Islamic system of state rule. Islam does not intend to confine this revolution to a single state or a few countries; the aim is to bring about a universal revolution.” Maududi emphasized that while Jihad involves armed combat, Jihadists include all those who help achieve the ultimate goal of worldwide Islamic domination. Not just those who fight in the battlefield, but also the millions behind them who contribute to the effort.[4]

The scholar Andrew Bostom and others have clearly proven that Islamic culture has never been “tolerant” in any meaningful sense of the word. This is a modern myth. Constant humiliations and occasional outbursts of deadly violence against non-Muslims have been a continuous feature of Islamic life for centuries, encouraged by Islamic religious scriptures. This is not a recent phenomenon, and it goes for both major branches of Islam. There are theological differences between Shias and Sunnis, but while these matter to Muslims themselves, they are of secondary importance to non-Muslims. Both Shia Islam and Sunni Islam encourage Jihad expansion, doctrines of Islamic supremacy and violent hatred of non-Muslims.

According to traditional Islamic history, the Treaty of Hudaybiyya was an agreement between Mohammad and his early Muslim followers in Medina, and the pre-Islamic pagan Quraysh tribe of Mecca. This is alleged to have taken place in the year 628 of our era. It affirmed a ten-year truce, a “hudna” or period of temporary calm. However, this truce was broken as soon as the Muslims felt that they were in a stronger position vis-à-vis their non-Muslim neighbors. A true and lasting peace on equal terms with non-Muslims is impossible, according to Islamic law. In the end, Islam can and should be globally triumphant. It is important to recall that the Sunna or personal example of Islam’s founder Mohammed and his early followers is intended to be valid for all times and all places. The Treaty of Hudaybiyya is therefore not merely of historical interest; it remains crucial for understanding how devout Muslims relate to non-Muslims today.

The traditional hadith literature of Sunni Muslims confirm Mohammad’s tactical formulation when waging Jihad: “War is deceit.” (Hadith Bukhari 4:269).[5] In addition to this, we encounter the Islamic doctrines of taqiyya and kitman (concealment and disguise). This allows for Muslims to lie and cheat to others, if this can be used to further Islam’s cause. Such tactics are employed by Shia Muslims and Sunni Muslims alike.

Jihad is eternal. It entails a conflict that will never end, until the supremacy of Islam, Islamic rule and sharia laws have been established worldwide. Any agreement with non-Muslims is viewed as a hudna, similar to the Treaty of Hudaybiyya which Mohammed himself made with his non-Muslim opponents. Such a truce exists only so that Muslims can grow in strength and regain the upper hand. As soon as they feel they have the advantage, Muslims are encouraged to go on the offensive against the infidels again. As Andrew Bostom notes:

“In fact the consensus view of orthodox Islamic jurisprudence regarding jihad, since its formulation during the 8th and 9th centuries, through the current era, is that non-Muslims peacefully going about their lives—from the Khaybar farmers whom Muhammad ordered attacked in 628, to those sitting in the World Trade Center on 9/11/01 — are — muba’a, licit, in the Dar al Harb. As described by the great 20th century scholar of Islamic Law, Joseph Schacht, ‘A non-Muslim who is not protected by a treaty is called harbi, — ‘in a state of war’, — ‘enemy alien’; his life and property are completely unprotected by law…’ And these innocent non-combatants can be killed, and have always been killed, with impunity simply by virtue of being ‘harbis’ during endless razzias and or full scale jihad campaigns that have occurred continuously since the time of Muhammad, through the present. This is the crux of the specific institutionalized religio-political ideology, i.e., jihad, which makes Islamdom’s borders (and the further reaches of today’s jihadists) bloody, to paraphrase Samuel Huntington, across the globe.”[6]

Islam contains elements of a traditional religion, but also elements of a totalitarian belief system centered around a personality cult of Mohammad. Islam is a creed of war, not a religion of peace. In theory, this war will end when all human beings on Earth have submitted to Islamic rule and eventually become Muslims. In practice, experience show us that Muslim societies are far from peaceful. Muslims will continue to fight amongst themselves over who are the best and truest Muslims. Islam can with some justification be classified as a permanent world war, a war that has so far been raging for fourteen centuries and claimed countless lives.