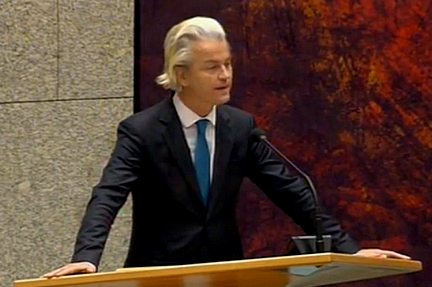 Geert Wilders, the leader of the Party for Freedom (Partij voor de Vrijheid, PVV) in the Netherlands, spoke in the Dutch parliament yesterday for the first time since the jihad massacre in Paris a week ago today. Mr. Wilders reiterated what he has been saying for years: that the Netherlands must stop importing Muslims, close its borders, and prevent mujahideen who are fighting in Syria from ever returning “home”.

The arguments and questions aimed at him by his parliamentary critics (including a Turkish-Dutch member) were lame at best. It is becoming increasingly difficult for proponents of Multiculturalism to put forward convincing reasons why Mr. Wilders is wrong in his stance.

I haven’t seen any poll results since the Paris atrocities, but the PVV was the most popular party in the Netherlands before the attacks. It will be interesting to see its numbers in the next poll.

12 thoughts on “Geert Wilders: “The Name of That Evil is Islam””