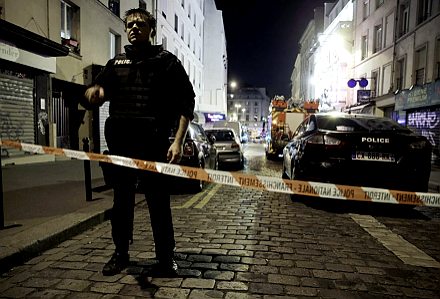 Our French correspondent Madeleine sends this brief account of conditions in France both before and after last night’s horrific jihad massacre in Paris:

The only thing I can say for sure is that the French police (CRS) knew that something was imminent. It would appear that they didn’t know the exact location, and were on alert.

My sister left Paris at 6am on Saturday [today, November 14] because of the attacks and met a dentist on the train who had planned to demonstrate with others in the health sector against some plans by the government which would dictate what physicians would be allowed to prescribe, and would allow the government to have access to all the health files of French citizens.

He asked a CRS where he should go to congregate with other health practitioners, and was told to give up his plans and go home, as something was about to happen.

As far as I can forecast, nothing will change, the government is too riddled with foreigners who do not have the best interests of France at heart, and socialists who will fill their pockets until the very last moments. They even have female Moslems in ministerial positions!

The situation is going from dreadful to nightmarish under a veneer of everyday routine. It can be quite surreal sometimes.

The university hospital in my home town in Western France, a town martyred during WWII (razed to the ground by Allied bombings), is run by a posse of traitorous socialist scum. There are gangs roaming the wards, stealing from the patients’ rooms, breaking into the nurses’ cloakrooms and breaking into cars a few yards from the doors to the different buildings. The police cannot arrest anyone unless they catch them red-handed, and the security guards are never there when you need them.

Succeeding governments have allowed a state of lawlessness to prevail all over the country. Africans and Arabs get away with arson, murder, assault and battery scot-free, or near enough, but woe betide a true Frenchman who defends himself or his property!

We have a terrible problem with brainwashed masses. Look at this idiot, playing bloody “Imagine” by that horrid little socialist John Lennon. As an hommage to those metal fans mowed down by machine guns in the Bataclan venue, it’s more like a kick in the face.

108 thoughts on “France: “Going From Dreadful to Nightmarish Under a Veneer of Everyday Routine””