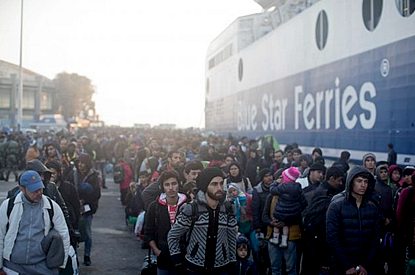 We’ve reported several times on the situation in Spielfeld, a small Austrian town near the border with Slovenia. Back in September, after Hungary closed its borders with both Serbia and Croatia, the columns of “refugees” that had previously been passing through Hungary to Austria shifted to the southwest and started transiting through Croatia and Slovenia.

Most of the traffic moves along a major corridor from Ljubljana to the Austrian city of Graz, which takes the migrants through the crossing near Spielfeld. After they are processed by the Austrian authorities, most of them are shipped northwestwards to Bavaria, since Germany is their preferred destination. In the meantime, thousands of refugees collect on both sides of the border between Austria and Slovenia.

For weeks the migrants had been coming across the border in a steady stream, thousands every day. And then suddenly the stream dried up.

Last week Greek maritime workers called a strike. The affected vessels included the ferries that regularly transfer “refugees” from the islands of Kos and Lesbos — which is where they are abandoned by the people-traffickers — to Piraeus and other ports on the mainland. From there they make their way through the Balkans as fast as they can — Macedonia, Serbia, Croatia, and then on to Austria and Germany.

The strike went into effect on Tuesday November 3 and lasted a couple of days, causing serious problems for those tasked with moving the migrants. From Kathimerini:

The Panhellenic Seamen’s Federation (PNO), which was on the second day of a 24-hour strike on Tuesday leaving ferry boats tied up at port, is due to discuss whether to resume bringing refugees from the islands to the mainland

The union’s executive committee was due to meet midday on Tuesday to discuss the request as authorities on the islands warn that an interruption in ferry services could make management of the refugee inflows impossible.

“Refugees” were stranded in their thousands on the islands of the eastern Aegean. And a few days later a funny thing happened —the flood of migrants crossing from Slovenia to Austria was reduced to a trickle. Normally the migrants are whisked through Greece, Macedonia, Serbia, Croatia, and Slovenia, presumably by bus and/or train most of the way (see this video). They move so quickly that the flow through Spielfeld stopped almost immediately after the strike took effect.

According to reliable sources in Austria, by Saturday November 7 — four days after the strike began — the number of refugees waiting to get through the border at Spielfeld had dropped from thousands upon thousands to about 250.

This puts the lie to the widespread assumption that the flood of migrants into Europe is coming in like a tide and can’t possibly be stopped. Greek ferrymen put a stop to the “refugee” crisis without any problem at all. If the ferries stopped running, the migrants would stop arriving in Europe. Yes, the Greeks would have to dismantle the tourist resorts and abandon the islands to the immigrants. But the tide would stop. The “refugees” left behind would have to eat seagull eggs and drink rainwater. The word would get out, and the boats would stop coming.

Nothing like that will ever happen, of course. The strike is now over, and the flood has resumed. The “inevitable” stream of migrants is once again pouring through Greece towards Slovenia, just like before.

According to The Fairfield Citizen:

Thousands of refugees and other migrants are heading to the Greek mainland from the eastern Aegean islands after the country’s seamen’s union called off rolling 48-hour ferry strikes.

The strike, which began Monday, had stranded an estimated 25,000 people on the islands. Ferries began operating again Friday morning.

Several ships dedicated to refugees set sail from the islands of Lesbos and Chios, while others were taking ships from other islands on the regular passenger ferry service.

The ferries are heading to Greece’s main port of Piraeus near Athens and the northern port cities of Thessaloniki and Kavala.

But Slovenia has had enough, and is ready to act against the tide of migration. According to France 24:

Slovenian government said Monday it would take urgent measures to strengthen control of its Schengen border with Croatia, fearing an expected new wave of migrants would be scarcely manageable.

“The government has prepared additional urgent measures to manage the migrants’ flow, including the necessary measures to safeguard the Schengen border,” the administration said in a statement issued late Monday.

Earlier in the day Slovenian foreign minister Karl Erjavec said that 20,000-30,000 migrants heading towards western Europe could flock on Slovenia’s border — the passport-free Schengen area’s external frontier — later this week, following the end of a Greek ferry crews’ strike that contained the flow for days.

“We estimate Slovenia will rather likely soon have to face a number of migrants that will be hard to manage. Such a situation could lead to extremely severe humanitarian conditions,” the government said.

The statement did not explain what “necessary measures” was but private POP TV reported quoting unofficial sources that the government had decided to start building a barbed wire fence on the most vulnerable part of the border, where most of the 167,000 migrants that entered Slovenia over the last month came in.

The TV report added that Slovenia had already acquired enough barbed wire to erect some 120 kilometres (75 miles) of fence to secure part of its 670-kilometres long border with Croatia.

Slovenia and its two million population has been struggling to cope since suddenly finding itself last month on the main route for thousands of migrants travelling to northern Europe after Hungary sealed its borders.

What I notice in the above report is that Slovenia has seen upwards of 200,000 refugees cross its borders in the last month or so, and that number is equivalent to 10% of its population. Angela Merkel and the European Union want Slovenia to just suck it up and deal with it — to take in all these hordes of people, because it is their bounden duty as a member state of Modern Multicultural Europe.

But Slovenia has decided to Just Say No. It’s even going to — GASP! — put up a fence along its border with Croatia. From Reuters:

Slovenia began erecting a razor wire fence along parts of its border with Croatia on Wednesday, saying it wanted better control over a tide of migrants flowing through the tiny country en route to other areas of Europe.

The continent is grappling with its biggest influx of migrants — more than one million are expected this year — since World War Two and is deeply split over how best to respond. European Union leaders were to hold a special summit in Malta later on Wednesday to try to iron out their differences.

Around 180,000 people, many fleeing war in Syria and Afghanistan, have streamed into Slovenia since mid-October after trekking northwards along a Balkan corridor from Greece, most of them bound ultimately for Austria and then Germany.

Slovenian army trucks loaded with wire fencing arrived in Veliki Obrez, a village on the southeastern border with Croatia, early on Wednesday. By 1400 GMT, over 1 km (mile) of wire had been strung up, a Reuters photographer there reported.

“The barriers do not have the purpose of preventing arrivals to Slovenia or significantly reducing them… Their purpose is to direct the flow of migrants to controlled entrance points,” Bostjan Sefic, state secretary at the Slovenian Interior Ministry, told a news conference.

Hungary, whose anti-immigrant government shut its border to arriving migrants in October, as well as the Czech Republic, Poland and Slovakia deeply oppose the quotas.

Slovenia is facing more pressing logistical concerns. Prime Minister Miro Cerar said on Tuesday that the ex-Yugoslav republic, the smallest on the migrant route, lacked the resources to shelter large numbers over the harsh winter if Austria closed its border as well.

Slovenia’s boundary with Croatia will remain open, Cerar said, but the fence will prevent migrants entering the country at uncontrolled points along the frontier.

One final note: consider the ferryboat shown at the top of this post. It’s from Blue Star Ferries, a commercial Greek line that plies the Aegean islands, mostly catering to the tourist trade.

But those aren’t tourists queuing up on the quay waiting to climb on board. And they’re not paying any fare.

But running those ferries from Kos and Lesbos to Piraeus every day is a very expensive operation. And someone is paying for it.

Just as someone is paying for all those buses queued up on the border between Macedonia and Serbia. And for all the trains carrying refugees across Austria and Germany. And for all those gigantic heated tents set up at the reception centers in various countries.

Someone is paying for it all, but who?

18 thoughts on “Damming the Stream”