Here we are at the final day of our quarterly fundraising week.

Readers who have not yet stepped forward should rush for the tip cup now, before the watertight doors close and the Gates of Vienna submarine descends once more into the murky depths of the Counterjihad.

It’s a good thing we’re wrapping up this fundraiser today, because the week has left me exhausted. But then it always does — by the time Day Seven comes along, my weariness amazes me.

In keeping with the spirit of the Seventh Day, I’m going to take a bit of a rest today and write a light-hearted bleg post. Dymphna and I covered some heavy topics this week, and considering how heavy the news has been every day — today’s headlines are particularly ghastly — it seems appropriate to indulge in whimsy and frivolity, just for a change of pace.

As you all know by now, the theme for this week is “Home”. So let’s return to the sepia-toned home front for some rambling odds and ends on the topic. 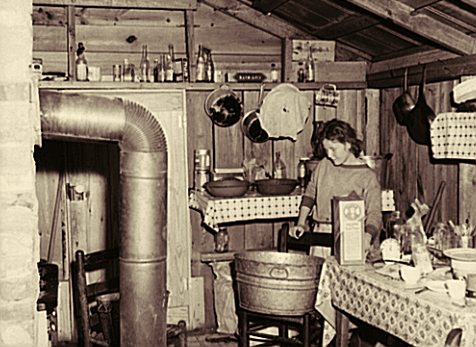 As we’ve emphasized before, this blog is a Ma ’n’ Pa operation run out of our home, as befits our fundraising theme. Pa — that’s me — has the job of collecting, collating, editing, and formatting material for the site. As for Dymphna — well, everybody says she’s the brains behind Pa.

In keeping with my propensity for collecting and collating, this morning’s exegesis will focus on compound words and phrases that contain the word “home”. We’ll maintain the lighthearted tone by avoiding depressing combinations such as “home invasion” and “homework”.

But not too light — consider the word “homesick”. As Dymphna pointed out last night when we were discussing possible words, homesickness is much more severe than mere nostalgia. Drawing on memories of her years in the orphanage, she described a deep longing that consumes one’s entire being.

I never had an experience as severe as hers, but my first few summers at Boy Scout camp made me miserable. I would spend the whole week counting the minutes until I could go home. During the last summer camp I went to, I remember suddenly noticing that I wasn’t homesick at all this year — by then I was fourteen; what did I care? Scout camp was just another boring experience like so many others forced upon my adolescent self. No big deal!

Now let’s look at a few down-home words. Start with “home fries”. For those of you who live far from this part of the world, those are potatoes that are cut up into small pieces and fried for breakfast. And not to be confused with hash browns, which are unpleasant Northern glop when compared with home fries, which are Southern. Strangely enough, because Maryland and Virginia are border states, you often find both home fries and hash browns, sometimes on the same menu. (And, as an aside, we’re far enough north here that grits are considered optional additions to one’s diet — which is not true in the Deep South.)

It wasn’t until I first moved down here to the Outback that I heard the phrase “old home place”. It’s what extended families call their ancestral home, which may or may not be occupied all year round. It’s usually a big old frame house where grandparents or great-grandparents brought up the ancestors of the current generation. Even if it isn’t occupied, someone in the family who lives nearby is responsible for mowing the lawn, pruning the shrubbery, and doing the necessary repairs, so that the building doesn’t look abandoned. It may well be the location where family reunions take place, and where people stay during Homecoming (more on that below).

When you visit someone and ask them about a photo or a painting of a tree-shaded house on their living room wall, chances are they’ll tell you: “That’s the old home place.”

Another custom that may be peculiar to the South — Dymphna says she never heard of it until she moved down here — is Homecoming. That’s an annual gathering at church where people come from all over for a service and a big meal. It’s kind of like a family reunion, but for a congregation. People who have been several generations away from the area may turn up every year for their ancestral church’s Homecoming. And locals from other denominations in the immediate environs often attend each other’s Homecomings.

The custom seems to be a Protestant one, in my experience. But there are very few Catholics in this area, so I can’t say for sure what their customs are.

Enough of the frivolity! Let’s really go home, to where the music is:

What? You were expecting Bob Dylan or something?

This is the Sinfonia and Chorus from the cantata “Wir danken dir, Gott” (BWV 29) by Johann Sebastian Bach. It’s a performance by the ANU Chamber Orchestra and ANU Chamber Choir, recorded a couple of years ago in Llewellyn Hall at the Australian National University in Canberra. It’s not necessarily the best rendition of the piece — the audio quality leaves something to be desired — but it was the only version I could find in which you could watch well-dressed young musicians lending their voices to and sawing away at one of the finest pieces of music in Christendom.

For the record, my favorite version of BWV 29 (Sinfonia only) was recorded by the Northern Sinfonia, conducted by Richard Hickox and featuring Peter Hurford on the organ.

And in my amateur opinion, the Sinfonia ranks up there with Brandenburg Concertos #3 and #5 as the best of Bach’s orchestral music.

And when I’m listening to Bach, I’m definitely at home. Even in the car.

Many thanks to all of you who sent in your gifts yesterday:

Far Abroad: Australia, the Netherlands, Poland, Sweden, and the UK

That’s it for this fundraiser. There’ll be a wrap-up post sometime tomorrow.

19 thoughts on “Bringing it All Back Home”