Our Israeli correspondent MC observes the parallels (and differences) between the situation of the Jews in Palestine, both before and after the events of 1939-45, and today’s Great Refugee Crisis in Europe. 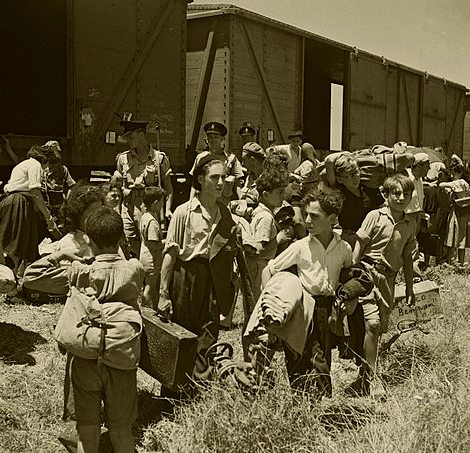 In the last century, within living memory, there has been a migration issue very similar to that currently faced by the EU, but it was handled very differently.

Britain was mandated by the League of Nations (and subsequently the United Nations) to set up a Jewish Homeland in Palestine, but being an essentially pro-Arab nation, Britain betrayed the Mandate and closed Palestine to further Jewish settlement, mainly at the behest of Hajj Amin Al-Husseini, father of the PLO/PA. 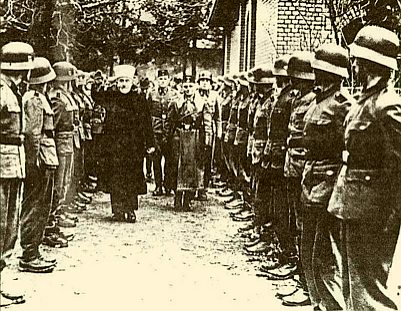 This policy led directly to a similar refugee problem involving Jews who were fleeing anti-Semitism in Europe and travelling to Eretz Israel as ‘illegal’ (from the British point of view) migrants.

These, however, were not young men in their prime; they were whole families fleeing certain death.

The British answer to the problem was to build a concentration camp at Atlit, just south of Haifa. Illegals were put in cattle cars, and shunted into the siding at Atlit. They were disembarked by the military, separated by sex, sprayed with delousing fluid and forced naked into the showers. They must have been very relieved when water came and out not Zyklon-B…

One can almost feel the terror this must have invoked in those newly liberated from Nazi death camps.

As more migrants arrived, and the camp proved to be insecure, further offshore camps were set up on Cyprus and Mauritius.

In this case it was the British action that was illegal under international law, but that did not worry the Foreign and Colonial Office in London, where the traditional upper class British distain for Jews was rampant in the Atlee Labour Government of the time. Then, as now, socialist victimology was selective, and Holocaust survivors (both Jewish and Polish) were not part of that select few.

Bevin, the Foreign Secretary, was a noted anti-Semite and ignored American protests about the situation, preferring to collude with Egypt to ensure a final solution to the ‘Palestine’ problem in the 1948 War of Independence.

There are many differences in detail between the two migration situations, the main one being that Jews are not intrinsically violent in the way that Muslims are, and are fully capable of responsibility for self-administration. Eventually however, Jews too resorted to ‘terrorism’, inflicting terrible and explosive dents in the British arrogance.

There are many further parallels too, this from Francisco Gil-White’s website:

Kenneth Levin remarks on the great difference between Herbert Samuel (High Commissioner) and his non-Jewish successor:

“Samuel was replaced by Lord Herbert Plumer, who generally resisted further backtracking from the Mandate even in the face of Arab pressures, and Plumer’s three years in office saw a marked decrease in violence. This reflected a pattern that has been noted by a number of historians who have written on the Mandate: Appeasement tended to result in increased Arab violence as violence was perceived as yielding rewards, while a more steadfast course and rejection of concessions in the face of violence typically yielded more peaceful interludes.”

“Beginning in 1928, there was mounting tension between Jews and Arabs. After years [the three Plumer years] in which the British had imposed impeccable public order and Jews, men and women alike, had been able to walk freely throughout Palestine in complete safety and without fear, the situation now changed. There were more and more incidents of rape of young Jewish women in Jerusalem by Arabs and an increasing number of robberies in cities and towns everywhere in the country. …the background to these incidents was criminal, not nationalist.”

In 1929, the next year, there was a Zionist Congress in which Zionist leader Chaim Weizmann remained in control despite widespread criticism of his acquiescence to any and all anti-Jewish measures decided by the British government, measures that violated not only the spirit but the letter of Britain’s treaty obligations to the Jews. Feeling the climate change, and sensing an easy prey, in the same year of 1929, Hajj Amin al Husseini once again mobilized Arab mob violence against the Jews in British Mandate Palestine. Writes Kenneth Levin:

“…shortly following the 1929 [Zionist] Congress, the de facto leader of the Palestinian Arabs, Amin al Husseini, Grand Mufti of Jerusalem, orchestrated large-scale assaults on the Jews of the Yishuv [Jewish community], attacks that began in Jerusalem and soon spread throughout the country. In Hebron, one of the hardest hit targets, more than sixty Jews were killed and the rest of the community was forced to flee.”

“The [1929] riots were accompanied by militant Arab slogans such as ‘The law of Muhammad is being implemented by the sword,’ ‘Palestine is our land and the Jews our dogs,’ ‘We are well armed and shall slaughter you by the sword.’ There were also brutal acts by Arabs for the apparent sake of cruelty, such as the killings in Hebron, where small children were tortured by their murderers before being murdered. The dread that the Arabs were planning to annihilate the entire Jewish community — men, women, and children — in one concentrated burst of violence surfaced for the first time in the wake of the August 1929 disturbances [which]…swept with a fury through Jewish settlements and neighborhoods throughout the length and breadth of the country. The danger now appeared to threaten the very survival of the entire Jewish community.”

What did the British do? As in 1920-21, the British cooperated with the Arab anti-Jewish violence.

Toujours le meme chose, one might say, for Paris too is the product of the same vacillation. So what is the attraction of Islam that, whilst Jews must be interned in concentration camps, Muslims must be free to kill and maim, rape and pillage?

If we look at the motivations here, we find that all is not quite what it seems. Whilst the British Military Administration wanted to spike ‘Zionism’, the real aim of the Arab elite was, however, to keep Palestine in its original Ottoman Feudal state. The Jews were liberating and enriching the Arab peasants and the ruling Arab elites did not like it; Arab terrorism against Jews was thus aimed at Arabs not Jews, the objective being to stop integration and the subsequent erosion of Arab elite influence.

It is well to consider why France is a particular target of Modern Islamic Nationalism: it has a huge Islamic population, many of whom are in danger of assimilation and the resulting apostasy. I have met many assimilated Muslims, in the UK and in Israel, they too know that they are targets, and mass assimilation would be a threat to the Islamic elites and their plans for world domination. The French Left falls for the hoax, too. Their solution is to project the problem to Iraq and Syria; it is more comfortable than tackling the real problems at home.

“This naiveté [trying to organize Arab workers] can profitably be compared to how many Jews today on the ‘left’ increase their efforts to accommodate their Arab enemies even as Arab violence against the Jews mounts. History repeats itself, because the culture of both Jews and Arabs is transmitted vertically from parents to children, so we see similar self-destructive responses on the part of Jews mobilized in the face of similarly intractable terrorist racism on the part of Arabs. We must not forget, however, the role played by Jewish leaders without any real concern for the lives of Jews, on the one hand, and the role played by thoroughly cynical Arab leaders backed by the great powers, on the other, because these aspects, too, have been reproduced from the past into the present.” [Gil-White]

Almost the whole world (with notable exceptions) is trying to appease Muslims, and reaping whirlwinds as a result. But when the world acts in unison, one must start to suspect ulterior motives.

Much of the Muslim success in penetrating the West can be put down to post-Holocaust guilt, and whilst this may be true at grassroots level, it is uncharacteristic of ruling elites to feel any kind of humane response to anything. The Jews of Atlit presented no threat to anything or anybody, and could therefore be locked up at London’s pleasure. But if our ruling elites want a New World Order, they must first create the chaos from which the order can emerge.

As was so astutely noted, “Religion is the opiate of the people” (Marx), and the target religion here was Christianity, not Islam. Opium is a sedative, not a stimulant, and a drugged people do not create chaos. To create chaos one must destroy the unifying influence of culture, locality and nationality.

If I inject my body with an alien substance, my body reacts, sometimes unpredictably (chaotically). To forcibly mix local Christianity and alien Islam is to produce an explosive eruption such as happened in Kosovo and in other places, particularly in the Balkans, the history of which area is very revealing.

So, our elites are gambling, betting that Kosovo can be reproduced across Europe and that they will emerge smelling of roses. However, as with any social engineering experiment, the unintended consequences can be catastrophic.