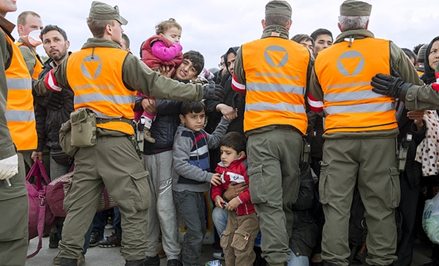 As reported here previously, after Hungary closed its borders to further “refugee” traffic, the Austrian town of Spielfeld (just across the border from Slovenia) became the new hotspot for migrants. Thousands upon thousands of them have backed up in Slovenia, waiting to cross into Austria, with more collecting every day. When they arrive in Spielfeld, they are housed in temporary accommodations until they can be loaded on buses for transshipment to Germany — which is the preferred destination for most of the “refugees”.

Many thanks to Nash Montana for translating the following article from ORF, the Austrian public broadcaster:

The night between Friday and Saturday was one of the more quiet ones in Spielfeld since the mass wave of refugees concentrated on southern Austria. In the face of an impending demonstration of ‘asylum opponents’ and apparent disagreements between police and the armed forces, the mood at weekend’s beginning was nonetheless tense.

According to District Commissioner Manfred Walch, it was expected that circa 800 protesters would gather at the train station in Spielfeld at 13:00, and then march on the B67, Grazer Street, up to the collection point. However, at the beginning of the march there were only 100 people — ORF.at has more. Actually, the demonstrators wanted to hold three different marches, but Walch approved only one, since he didn’t want to strain the already heavily burdened deployment even more.

The person who requested the gathering was the same one that also co-organized a non-approved march on Austrian National Day. Another woman had also organized a march, but she dropped her plans and decided to link her crowd with the larger demonstration. A third march organizer withdrew his request for approval for a demonstration.

In the meantime the army sent more soldiers to the border crossing. On Friday evening another military company was relocated from Burgenland to Spielfeld. “The 79 soldiers are experienced professional soldiers of the 3rd armored infantry regiment from Lower Austria and the Burgenland”, the Austrian Armed Forces (Bundesheer) said in an announcement on Saturday. With that, 800 of the 1,500 security soldiers are now actively deployed in Spielfeld.

It is said that the mood between the Executive authorities and the soldiers is not at its best. Last weekend the news magazine Profil wrote in a preliminary report that there were intense disagreements and conflicts. Apparently the triggering event for the conflict occurred on Wednesday evening, when the border was temporarily opened for security reasons around 18:00. 3,000 refugees were already pressed against the actual border crossing, and another 1,500 were moving up towards it from Slovenia.

Apparently the police withdrew as the gate was opened. Which left the soldiers alone in the mass of refugees — without protective gear such as security vests. In the subsequent briefing, the police and the army officers clashed vehemently. Differences of opinions were heard, especially about the tactical approach in Spielfeld. The suggestion of the army to use a Pandur-Radpanzer [a link to the Bundesheer homepage with pictures of the Pandur — translator] was vehemently rejected by the police.

With respect to the number of refugees [Translator’s note: Throughout the article the word for “refugees” is not used, but rather Schutzsuchende, which translates roughly as “protection seekers”] the situation in Spielfeld was somewhat relaxed. On Saturday there were 80 buses ready and waiting at the collection point to transport the 1,700 waiting refugees and new arrivals onwards. For the coming days, the same number of newcomers was expected as in the past few days, explained the police spokesman Christoph Grill on Saturday. On the Slovenian side of the border the train station in Sentilj had established an additional stopping point for trains.

The night at the collection point in Spielfeld was fairly quiet, according to the police. Among the 1,722 people who had spent the night in one of the five heated tents, there weren’t any reports of violent attacks or rioting. “Of course there is always disturbance and turmoil when buses arrive, but basically everything is running smoothly,” Grill says. The OBB [Austrian Federal Railway] also supplied two extra trains.

Number of Cases of Disease is Increasing

According to the Red Cross there are a minimum of 600 people daily who receive medical treatment: Mostly children, elderly people and pregnant women suffer from the stress their situation brings. “Many have colds or the flu, or have sprains, or small wounds,” says August Bäck from the Red Cross. The arriving refugees are being provided with lunch packets containing bread, tea, water, bananas, apples, and chocolate.