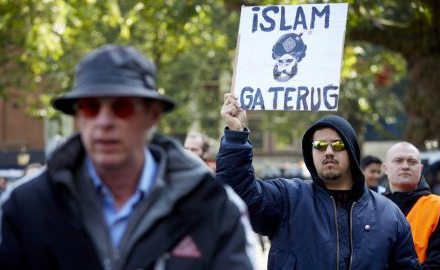 A demonstration by the Dutch branch of PEGIDA was held in Utrecht over the weekend. As usual, masked “anti-fascists” were on hand to shout down, harass, obstruct, and commit occasional violence against the peaceful anti-Islam protesters.

The collusion between the authorities and the antifas is becoming increasingly blatant. During this demo you can see demonstrators being arrested and put in a police van while jeering antifas look on, chanting. You can also see a policewoman confiscate signs featuring the “Turban Bomb” Motoon — presumably the lawfully owned private property of one or more demonstrators, but none of that matters when “hate speech” rules have to be enforced.

The video below was taken by one of the antifas and shows demonstrators being put in a police van. It’s not as interesting as some of the others, but it was the only one with audible enough dialogue to be meaningfully subtitled. See the other videos — including one showing a protester being dragged away by police — at Vlad’s place.

Many thanks to H. Numan for translating what he could of this clip, and to Vlad Tepes for the subtitling:

23 thoughts on “Antifa vs. PEGIDA in Utrecht”