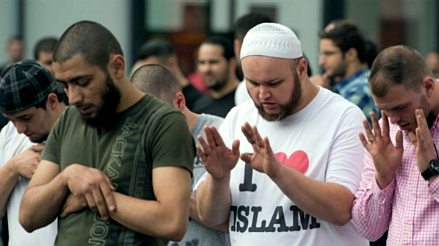 The following piece by Michael Mannheimer (and the German Huffington Post) concerns the warnings of an ex-Muslim about the dangers of Islam, and how they are likely to go unheeded in German society.

JLH, who translated the articles for Gates of Vienna, notes that “The article from the German Huffington Post is preceded by Mannheimer’s own comments, and occurs just after the announcement of an interesting contest, translated below:”

And now, to give the affair a little oomph, a donor is giving 1,000 euros for the “Resistance Competition.”

Prizes will go to the most imaginative, creative ideas, and those most promising of success. Your imagination, your cleverness is requested. No matter whether a citizens’ movement, a network, a poster drive, a song or a series of presentations — anything that works and is meaningful. The winner gets 500 euros, second place gets 300 euros and third place gets 200 euros.

All suggestions must be non-violent, within the law, may have no racist, discriminatory elements and must be realistic and feasible.

Our system is deaf to the truth about Islam.

This apostate is saying everything we Islam critics — denounced by the media as “Islam-haters” — have been claiming, can prove, and have brought to the people in countless articles and speeches. But you may be sure that the warnings of those who leave Islam will be noted and then, nonetheless, ignored completely. We may be sure that not one politician, no one in the media, not even one top-ranking politician will be led astray from his/her settled (or prescribed?) opinion of Islam. It will play out as before. Millions more Muslims will be invited in on us, more mosques will be built, more “infidels” will be killed and butchered — multiplied by those in our own lands. And there will be nothing in the way of decisive countermeasures. Best case — every one of the trillion attacks against non-Muslims will be whitewashed as an “isolated incident,” worst case — these attacks will be blamed on criticism of Islam. That is, our criticism is “provoking” these attacks. I repeat: Only insurrection by the German people will put an end to the whole thing. Merkel’s departure is not enough. What comes after Merkel will not be much better.

Politicians in Germany Are Ignoring This Danger

As a young man, Ahmad Mansour belonged to the most radical Arab youth in Israel. His imam preached that Christians, Americans, Europeans, nationalists, communists — all belonged to Satan.

Today Mansour, who has studied psychology, lives in Berlin. He has long since repudiated those radical ideas. But now he has written a book about Islam, and how it can be combated in Germany. The title — “Generation Allah. Why we must re-think the battle against religious extremism.” In the book, he warns of the danger of radicalized youth and how it will become a danger to Germany.

Mansour calls them “Generation Allah.” There is much discussion now of what danger is coming from the Islamists who are going from Germany to the IS terrorists in Iraq and Syria. In an interview on Deutschlandfunk (German Broadcasting Service), Mansour said: “It is an enormous danger, but it is only the tip of the iceberg.”

The real danger, Mansour warns, is still being drastically underestimated by politicians and security services.

In the interview, he says of the youth with an immigration background:

“To some extent, the young men are not even religious. They don’t even pray. They don’t know much about their religion, but it is very important to them.”

“They are young people who believe in a punishing God, who acts and functions very much like the patriarchal father, with clear rules, with punishment — there is no talking to him, he is wrathful…”

These young men are the perfect quarry for the Islamists, and especially the Salafists in Germany. They only need to exaggerate their ideas in order to radicalize them.

The problem is, the political system must confront this danger. Thus far it has been concealed. “If we make these subjects taboo in the majority society, right there in society, and do not talk about them, then the radicals will,” he warns.

This goes so far that he — the ex-Islamist — is being called an incendiary by refugee advocates.

“On the other hand, I notice that there is some political tendency in this country to perceive us — the Muslims — as victims. If we accept responsibility, if we touch on the wrongs in our own community, then we do not fit into this image, and are quickly ignored, or defamed in a thoroughly politically correct manner — naturally not what I get from the Islamist side of things, but for me, that too is a kind of racism.”

To keep the “Allah Generation” from drifting into Islamism, Germany must conduct an honest debate. About the difficulties of integration, parallel societies and education for refugees and immigrants.

If the country does not to do that, many thousands of young people are in danger of becoming a lost generation.

14 thoughts on “A Lost Generation”