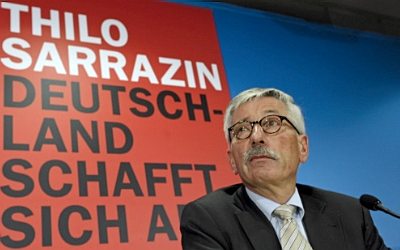 Below is the second part of last month’s interview with Thilo Sarrazin from Die Zeit. Part 1 is here.

Die Zeit: Aside from the fact that we do not believe that billions of people will start out from Africa — if they did, no fence could keep them out.

Thilo Sarrazin: Yeah, you should study a little military history. The British managed in WWI — without radar and, until 1916 — without aerial reconnaissance, it sealed the entire North Sea against blockade runners. Feel free to ask me what I would do if I were head of Frontex and had the political and financial means.

Die Zeit: So what would you do?

Thilo Sarrazin: I would capture every ship. Even if it were a not merchant ship, I would set its passengers ashore at the exact spot on the African coast where they started and destroy the boat. You may be sure — after six weeks, no more of them would start out and there will be no more boat refugees.

Die Zeit: Let’s think that through. You have a militarily secured, impenetrable border around the Schengen area. What do you do with war refugees from Syria?

Thilo Sarrazin: War refugees from Iraq and Syria should for then most part be accommodated near their homeland, that is in Turkey, northern Iraq and Jordan. And then, when the war is over, they can most easily return.

Die Zeit: That is, we should take no war refugees into Europe?

Thilo Sarrazin: I believe, to put it positively, war refugees should be accommodated near the location of he conflict.

Die Zeit: And if that overwhelms these countries? The situation in Lebanon is explosive, Jordan is extremely fragile, war against the IS prevails in Iraq…

Thilo Sarrazin: Turkey, Iraq, Lebanon, Jordan are the neighbor states. And there are the Gulf States or Saudi Arabia which are stinking rich and have taken not one foreign Arab and co-religionist. They have the primary responsibility to keep order in their region. But I would hold other European countries responsible too. I would not pay out one cent of the Greek aid package until the Greeks completely fulfill their obligations under the Dublin agreement. They ought to set up camps on Kos and Rhodes or wherever, near the border. And the Poles, Czechs and England must be brought to take in as many refugees as Sweden and Germany.

Die Zeit: And even then, you reach the point where you have to be concerned with the people who are now in Germany.

Thilo Sarrazin: But the answer to that depends on whether we proceed on the assumption that no more can come, or whether it will be a million this year, one-and-one-half million next year and five million the year after! But okay — the people who are here. There must be distinctions by origin — refugees from the Balkans should be sent back immediately.

Die Zeit: Without the asylum process?

Thilo Sarrazin: Basically yes. Or with a very abbreviated process. The Swiss are doing that successfully. They have no Balkan refugees. With the others, we distinguish according to war area — that leaves basically Syria. With all others — Eritrea, Somalia, etc., there is the suspicion that they are primarily economic refugees. In parallel, the right to asylum must be restricted to apply to political activists or people who are the object of genocidal persecution, but not for everyone who is being somehow oppressed in a dictatorship or incomplete democracy. Right to asylum as now defined means 80% of the world’s population can be here because of the conditions where they are. That is not tenable in the long run.

Die Zeit: Do you believe that a majority would support the policy you describe? Germans’ willingness to help speaks against that.

Thilo Sarrazin: I believe that a powerful, opinionated pressure on this question has been created by the emotional and completely one-sided reporting of the media, above all television. I have the impression that most people no longer have the self-confidence to express their feared and opinions. I can only say one thing: There is a great, unexpressed rage and a very great frustration which is by no means limited to Saxony.

Die Zeit: Rage and frustration at what?

Thilo Sarrazin: At a an amorphous an failed governmental policy concerning immigration and refugees. Do you know why my ideas have found so little agreement among well-paid gutmenschen like you and so much among ordinary people?

Die Zeit: We are all agog.

Thilo Sarrazin: Because the ordinary person does not feel threatened by doctors and engineers, but by people who are strong, who have muscles, can carryout simple activities and. by doing that, lower his pay or perhaps make him superfluous. If we bring in millions of immigrants prepared to work, we are putting powerful pressure on the bottom end of the job market. Politicians like Kaiuder de Maizière and, I hope, Merkel know that very well.

20 thoughts on ““There is a Great, Unexpressed Rage””