The European “refugee crisis” dominates the headlines these days, with the (mostly Muslim, mostly male) migrants streaming from the Aegean to Austria and Germany on the nightly news programs.

Our Norwegian correspondent The Observer sends the following report about the problems caused by a different group of immigrants to Sweden: the Roma. Widely described as “Romanians” when they make headlines in Europe, the gypsies cause difficulties wherever they migrate. Whatever country they settle in — which they never really do, being a nomadic culture — they cause exactly the same set of social problems. Ordinary citizens who describe the depredations of the Roma always describe the same symptoms: primitive living conditions, a lack of basic hygiene, piles of rubbish around their dwellings, and widespread crime in the surrounding communities.

Yet to discuss these issues in simple, factual terms is to risk ostracism and prosecution in most Western European countries.

A note from The Observer:

This report concerns a TV program that aired in Sweden a week or so ago. The program deals with the unwillingness of the Swedish police and various government agencies to uphold the law of the land. The program is called “Uppdrag Granskning” and may be found on YouTube. There are no English subtitles, but I would still encourage people to watch it, just to get a sense of how bad things really are in Sweden. 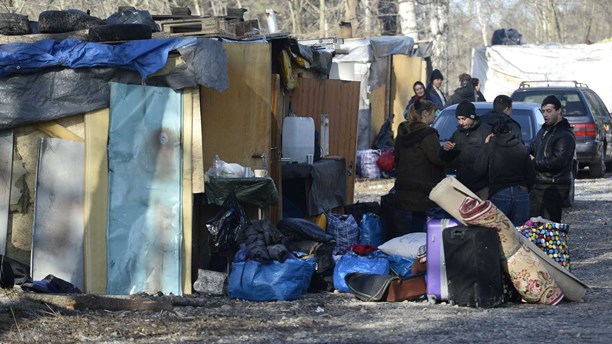 The Other Immigrant Invasion: The Migration of Roma into Sweden

The police in Sweden are waving the white flag.

No taxation without representation. It’s a principle that the founding fathers of the USA succeeded in introducing in the 18th century after a long and drawn-out revolution that cost several thousand American pioneers their lives. Their European cousins, however, let it slip through their fingers in the 20th and 21st centuries without even twitching an arm to prevent it. The consequence of this momentous loss is that any European citizen that today raise legitimate questions about the lack of democratic process will, figuratively speaking, be hit over the head with thousands of paragraphs, binding conventions and legislation concocted by unelected bureaucrats, which the concerned citizen has had no say in shaping or influencing whatsoever.

We got a brief glimpse into the way this lack of representation manifests itself in contemporary Europe a few days ago through the Swedish investigative TV program “Uppdrag Granskning”, which shone a light on some of the more disastrous side effects of one of the so-called fundamental “freedoms” of the EU, namely the one that deals with the destruction of national borders and the accompanying legislation that strips EU member nations of the right to decide who gets to cross their borders and who gets to stay. The program’s topic was the massive influx of Roma (gypsies) in recent years and the enormous problems that these individuals are causing in Sweden. The report focused primarily on the squalor and littering that seems to follow this particular group the way a contrail follows the flight path of a jetliner.

The reporter, Janne Josefsson, one of the few honest journalists left in Sweden, visited two different regions of the country, a tiny little village in the Swedish countryside, Högfors, and the heavily culturally enriched city of Malmö, where he showed the viewers how the Roma have completely taken over their surroundings and turned it into what can best be described as third-world shanty towns. Josefsson also reveals the total lack of consideration shown by the Roma for the rest of society, and how Swedish authorities deal with the numerous and revolting problems associated with this ethnic group.

Although the program didn’t deal specifically with the mass invasion of predominantly Muslim “refugees” that Europe is currently witnessing, it is still very informative and a must-see, most of all because it gives us a forewarning of how Swedish authorities will deal with the Muslim invasion when it starts in earnest in a few months. The simple answer is that they won’t, at least not if we’re to judge them by their response to the problems presented in the TV program, where various government agencies and local police pass the burden of responsibility for sorting out these issues among themselves like professional soccer players during a match.

The first half of the program is dedicated to the devastating fate that have befallen the indigenous residents of the little village of Högfors in the Swedish countryside, that have seen an influx of approximately 50-100 Roma in recent years. These “new Swedes” have moved into old apartment buildings that used to house Swedish workers in the past and that have now been bought up by private investors who are renting them out to the Roma. It highlights the legitimate concerns that the primarily older Swedish inhabitants of the village have, several of whom are too scared to even venture out of their houses.

One of the Swedish inhabitant interviewed in the program tells the reporter that the problem is getting so bad, mostly due to police indifference and inaction, that some of the villagers have hinted that they might get their guns out and sort the problem themselves. He adds cryptically that most of the people in the area are avid hunters, and that the majority of the Swedish households have guns. He is genuinely worried that some will eventually snap and simply take the law into their own hands.

The second half of the program is dedicated to the large groups of Roma that have set up an illegal squatter camp on an empty, privately owned block of land in the city of Malmö. And just like in Högfors, the various government agencies and local police, whose responsibility it is to deal with these issues are passing the ball among themselves like seasoned soccer pros.

However, the most shocking segment of the program, and a scenario which will most likely repeat itself in full when the mass invasion of Muslim refugees begins picking up pace in the coming months, occurs when the journalist pays a visit to the holiday home of an elderly Swedish couple that has been broken into by a Roma family of eight, who have now taken up residence there. The journalist calls up the Swedish owners, who are in Switzerland, while he’s standing outside the occupied residence. The old couple tell him that they have reported the matter to the police, but that they refuse to evict the new tenants because they do not know who they are, i.e. the police don’t know the identities of the squatters. The police refuse to do anything to assist the homeowners in repossessing their property, and they actually insist that the 80-year-old man, who live in Switzerland, fly back to Sweden and confront the Roma who are living illegally in his house, and personally obtain the identity of every single member of the household.

It is apparently beyond the scope of responsibilities of the Swedish police to check the identification papers of people who choose to reside illegally in others people’s properties. The distressed owner also tells the reporter that they only recently found out about the “new tenants” when their daughter showed up to spend her holiday there and got the shock of her life when she found the Roma family living in the residence.

This piece of information should send shivers down the spine of every property owner in Sweden, because it is a loud and clear message to potential squatters that the Swedish police are unwilling or simply too cowardly to respect and enforce private property rights in the country these days. The implication is that any property owner or tenant can be denied access to his or her home if squatters decide to break into the residence and move in. This invariably means that “refugees” who catch wind of this information — and there are probably plenty who already have — can simply break into a house when they show up in Sweden and move in, safe in the knowledge that it will almost be impossible to evict them, especially since one of the criteria for enforcing an eviction order is that the property owner confront the squatters and obtain their personal data.

Links about the right to confiscate properties in Sweden:

The Swedish authorities’ apparent indifference to the basic rights of property owners is alarming and a warning that the Swedish government will not hesitate to use special existing provisions that allow them, during a time of crisis, to confiscate privately owned holiday homes for temporary accommodation for “refugees”. The provision became law during the civil wars in the Balkans in the early 1990s when tens of thousands of asylum seekers escaping from the region settled down in Sweden.

And there is no question that the looming “refugee” invasion and the precarious housing situation in Sweden, which will become even more desperate in the coming months, will be classified as a crisis by the Swedish authorities. As a consequence, we can expect to see the Swedish state begin confiscating private properties this coming winter, in addition of course to “refugees” taking it upon themselves to assist the authorities by personally confiscating properties belonging to ordinary Swedes and in effect rendering these homeless, literally kicked out of their own homes by the “refugees” that their altruistic government has taken it upon themselves to invite to Sweden. When this happens, the circle will be complete, in that a socialist state will actually take their political beliefs one step further and follow the example of their ideological mentors in the Soviet Union, namely to disregard private property law and confiscate the properties of their own citizens.

In some ways it may be tempting to laugh and make sarcastic comments about how stupid and crazy the Swedes are for allowing this to happen to their country, but the truth is that we are all “Swedes” in the sense that what goes on in Sweden also goes on in our own countries. To a lesser extent, perhaps, and in a slightly less dhimmified manner. But remember this: the only difference is that the Swedes are being chauffeured down the multicultural highway in a luxurious Bentley, whereas the rest of us are driving along at a slightly slower pace and in slightly more modest vehicles. However, we will eventually arrive at the end of the road. We’ll arrive somewhat later, but don’t worry: we will all get there in the end.

13 thoughts on “The Other Immigrant Invasion”