Yes, it’s that time again. Time to reach deep into your pockets and drag out a few bills for the cause.

Today begins the one week per quarter when we pester our readers for donations to support this blog. I warned you last time that we would be back when the leaves started to fall, and here we are.

Old hands at Gates of Vienna know the drill, but for newcomers, here’s the deal: By holding a bleg every quarter, Dymphna and I are able to pay the hosting fees for our site. We are also able to use the resources kindly provided by our readers for DDoS protection and other utilities that keep us up and running. Whatever is left over goes towards our upkeep here in the palatial Schloss Bodissey — an absolute necessity, given the fact that very little additional work seems to be coming my way at the moment. 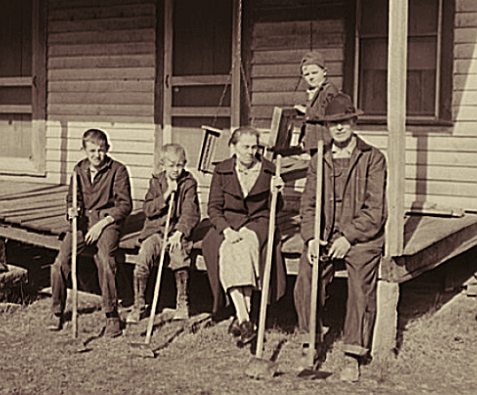 The theme of this week’s fundraiser is a broad one: “Home”. In particular, the old infidel folks at home here in the Virginia Outback, running an international Counterjihad operation from their humble shack. You can imagine us as more easterly analogues of those folks in Kentucky from 1940 posing on the porch of their home with their homemade hoes (whooee — a lot of alliteration in there). That’s me, Dymphna, and the future Baron with his two imaginary younger siblings…

The word “home” comes from a Common Germanic root, appearing as ham, hem, heem, heim, heimr, haims, and other forms in various Germanic languages, both living and dead. Its root sense evokes a group of dwellings inhabited by a small band of people, perhaps roughly equivalent to what we would now call a farmstead. The English, with their seafarers’ longing for home, turned the noun into an adverb: we don’t just go homewards; we go home.

Home, like any other concept in the hands of those who retail mass propaganda, meant something entirely different to Soviet President Mikhail Gorbachev back in the early 1980s when he coined the phrase “A Common European Home”. His use of the word “home” was like Hillary Clinton’s co-opting of the word “village”. In his case, it meant huge bureaucratic structures set up to manage the lives of people in what were formerly the nation-states of Europe, all in the name of preventing war and guaranteeing economic prosperity. He didn’t mean what was then the European Community, but he did mean something quite similar to the European Union, only with the USSR in the background running the show.

By the time Mr. Gorbachev put his head together with George H.W. Bush at the end of the decade, the two world leaders were in tune on such matters. The Common European Home would have been, in effect, the local European franchise of what Mr. Bush was pleased to call the New World Order. Everything in the new “home” would be carefully managed by the global elites for the common good, but without any significant input from all those ignorant common people, who didn’t really know what was good for them, anyway.

But then the Soviet Union fell apart and everything got chaotic for a while. Eventually the European behemoth came into being as the EU, absorbing former Soviet satellites and republics one by one, but excluding Russia. This new European home has lost any connection with nations and ethnicities. It is characterized solely by its “values”, which are vaguely defined, but include cradle-to-grave government control, pride parades, the celebration of diversity, and “tolerance” — especially a suicidal tolerance for as many illiterate Third World immigrants who care to walk across its borders and take up residence.

Which brings us to where we are now, here in the final twilight of the European Union. The current “refugee” crisis serves as the death knell for the pseudo-home created by the apparatchiks of the European mega-state. What comes after it is anybody’s guess, but its end is rapidly approaching.

As Lao Tzu said, “Whatever is contrary to Tao will not last long.” Nothing is more contrary to Tao than to deny a people its right to exist, as a people, so the days of the usurping monstrosity are numbered.

The current migration crisis was already underway the last time we held a fundraiser back in July. In the meantime, however, Turkey has opened the floodgates for the huddled masses waiting to get into Europe, and what was then a stream in spate has become a raging torrent.

Vlad Tepes and I were already overworked when the crisis broke. Since then we’ve been laboring mightily to snatch as much as we can of the digital flotsam and jetsam rushing past us and turn it into something that readers and viewers can readily take in.

Last month we were fortunate to acquire the services of two new translators, Nash Montana (German) and Xanthippa (Czech) to help us put out articles and subtitled videos about the catastrophe that is currently engulfing Europe, especially Germany and Austria. These two fine people deserve a big round of applause for their efforts.

And so does Vlad. I don’t know what we’d do without him. His ability to organize translation projects and put out videos is phenomenal — without him, the English-speaking world would have a much less comprehensive view of what’s happening in Central Europe as the current system begins its collapse.

That’s why we’ll tithe the proceeds of this fundraiser to Vlad, as we always do. Bear that in mind when you clink the tip cup, and if you want to add some extra for him, please visit Vlad Tepes and hit the donate button over there.

Dymphna will be along this time tomorrow to hit you up for Day Two of the Autumn Fundraiser. We’ll see you then.

8 thoughts on “The Old Infidel Folks at Home”