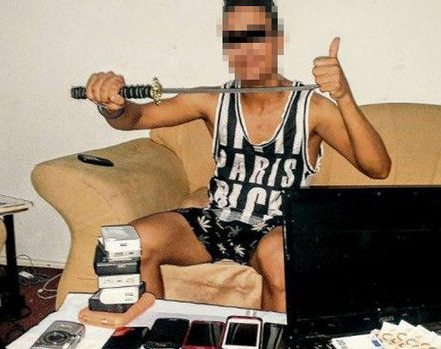 Nash Montana has translated an article about the culture-enriching “youths” of Berlin, multiple recidivists who receive virtually no punishment at the hands of the state, and brag about their larcenous exploits.

They are known as klau-kids in German. The translator includes this note about the term:

“Klau-Kids” — I don’t know how to translate that. It would literally mean “Steal-Kids”, or “Thieve Kids”, but I’m sure there are better expressions.

I chose “klepto-kids” because it retains the alliteration. Also, I strongly suspect the Greek word kléptes (thief) is cognate with klauen, which would make it appropriate. But there isn’t really any commonly-used equivalent English idiom.

Maybe we should call them “Light-Fingered Louies”…

The translated article from Bild:

Klepto-Kids Laughing Down the Police

Berlin — Thumbs up, sword in hand and a wide grin on his face. Ten criminal investigations of theft and larceny fill the dossier the police maintain on Walid K. (19) from Berlin. But in his photos on the Internet he keeps happily presenting himself with the fruits of his thievery: Smartphones, money, laptops, designer sunglasses.

The police have repeatedly arrested the 19-year-old and his buddies, and they are repeatedly let go again.

The police estimate that there are at least 150 “Klepto-Kids” active in Berlin. According to investigations, they come from Eastern Europe and North Africa, and have zero to multiple passports.

Most of these kids have pending asylum applications, but live without permanent addresses in Berlin. Example: Ismat O.; he claims he’s 16 years old. The Tunisian possesses two passports.

“Quite possibly in neither passports is his real name stated,” says one investigator. He is not registered, and gets caught stealing regularly. At current time there are more than twenty separate open cases against him for theft, robbery, and criminal property damage.

But despite all that, he is not held in custody. Bodo Pfalzgraf (52), the Chief of the German Police Union in Berlin, says: “It is absolutely incomprehensible that criminals like him are not held in pretrial detention.”

Martin Steltner (55), speaker of the Berlin Prosecutor’s office: “From a legal standpoint we need compelling suspicion of a crime having been committed. But exactly that can be difficult to determine with pickpockets.”

In other words, the offender would have to have been observed committing the crime by witnesses, which is hardly ever the case.

Another problem: Police report that judges are simply unwilling to write out warrants for so-called minor offenses like pickpocketing.

Pfalzgraf: “Every judge has pretty much his own reasons for why offenders don’t have to go to pretrial detention.”

None of these crimes bears any influence on an individual offender’s asylum application. “Even delinquents can file citizenship applications that have to be examined.”

Paragraph 53 of the Residency Act in Germany says an offender can only be deported if he is charged with a crime that bears a sentence of a minimum of three years. After that, whether the offender is an adult or a child does not matter.

The first picture in the article with the guy on the couch and sword in hand:

“Already 10 criminal investigations against him, but not a trace of regret: Walid K. (19) posing with a sword and his loot.”

“Two well-known thieves show their loot and the middle-finger. Ismat O. (16, left) has been investigated over 20 times.”

“Nabil Z. (16) beams into the camera with four smartphones in his hands. He posted this picture of himself on his Facebook page.”

12 thoughts on “The Klepto-Kids of Berlin”