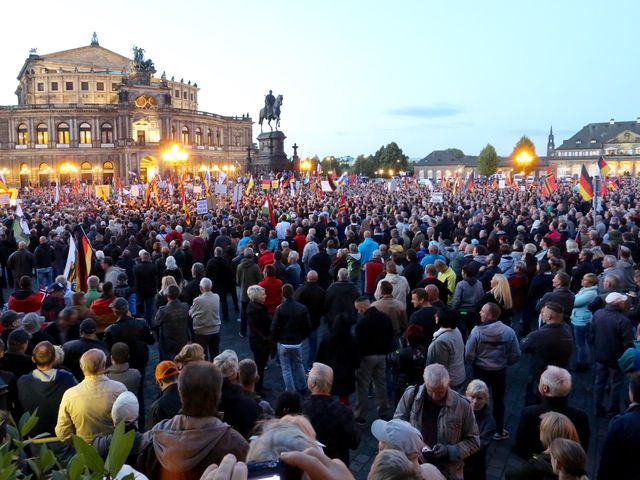 The following hit-piece on PEGIDA was published on Monday by Die Zeit. JLH, who translated the op-ed for Gates of Vienna, includes this introductory note:

Here is another desperate MSM attempt to demonize PEGIDA, but the movement’s strength shines through. It is interesting to watch the author work himself into a frenzy over what he clearly sees as inexplicable madness. And you have to wonder what sort of bubble prevents him from hearing the invective flowing from his side of things.

The Folk Festival of Racism

On Monday, PEGIDA brought more people to the street than it has in a long time. So what if there were arson attacks, Rightist riots. The organizers are aiming at escalation.

People complain, justifiably, about the friend-enemy line of thinking, but someone who adheres to that line of thought is quite comfortable. It has been described in detail how hostile and implacable PEGIDA’s actions are toward Muslims, politicians and counter-demonstrators[1] who do not think as they do. But anyone who is standing this Monday in the area of the stage a half-hour before the beginning of the demo sees the other side: PEGIDA from the inside. There is clapping and hugging. back-slapping and ear-tugging: “Jürgen, old friend. Nice to see you here.” Even Lutz Bachmann kisses a girl on her skateboard and distributes friendly handshakes. It is like Easter in the clubhouse.

A few more demos and PEGIDA will celebrate its first anniversary. The mini-rabble that came together in October 2014 for the first time to demonstrate against Muslims has already become one of the most successful political movements of recent years. This Monday, the Festival of Rage brought about 10,000 people onto the street.

It is noteworthy because the Germans have not just bitch-slapped PEGIDA, but beaten it to a pulp. The wave of solidarity experienced by the refugees is not only a reaction to the burning of asylum residences. And it cannot be understood absent PEGIDA, which has week-by-week been scraping away at the tolerant German self-image.

This summer has deprived PEGIDA of its most important argument, i.e., that it speaks for a majority of Germans. There were not only tens of thousands of willing helpers, but also the polls and, not least, clear statements from prominent citizens which must make it clear to even the last person, that he must choose between PEGIDA and the societal middle.

And yet they all came again. Bannewitz, Lichtenau, Elsterwerda and Roßwein[2] have packed up their signs and posters. As if on an excursion, mostly older men and women are standing happily together and taking pictures of the most amusing posters (Look at that, “Enough of Managed Opinion!”). The mood is so jolly that the next thing might be for Achim Mentzel[3] to step onto the stage in front of the Dresden palace.

The Public Screams: “Merkel Must Go”

But instead, Lutz Bachmann appears, reads the police reports as always, and goes directly into a tirade against the totalitarian Federal Republic where everyone with a free opinion is threatened with jail time. He demands a few resignations and predicts great revelations from the Ministry of Defense. Then he accuses Muslim refugees of bad hygiene and a propensity to violence, and finally mocks Ursula von der Leyen’s[4] doctoral dissertation. In full dudgeon, the public screams, “Merkel must go” and “resistance.” And then they break out in resounding laughter.

Bachmann seems to know every crime asylum seekers have committed in the area in recent weeks. But he does not say a word about what the rest of Germany has been talking about for a week. The arsons and even more the extreme rightist riots in Saxony, among other places In Freital, the hometown of Bachmann’s wife.[5]

You don’t have to be a leftist conspiracy theorist[6] to assume that there are many in the public here who were among those rioting in Heidenau and Freital. And that it was the Dresden Folk Festival of Racism that gave them the feeling they were acting on behalf of the majority.[7]

It is possible that that does not cause any great moral problems for Bachmann and the PEGIDA organizers. But how is it with the thousands and tens of thousands who come week after week to meet acquaintances, to laugh a little and above all to experience this uplifting feeling of the collective outburst of rage?[8]

Lutz Bachmann Gives the People What They Want

Things are escalating in Saxony. Bachmann and his people have apparently decided to give the people what they want. The speaker Tatjana Festerling agitates against “birth jihad” and “Muslim catapults.” Another, the Swiss Rightist Populist Ignaz Bearth, rants against the “pack,” “parasites” and “damned Islamists” who only understand the language of rubber bullets. “Europe is at war with the servitude of tyranny,” he roars from the stage, and the crowd cheers.

Finally, they walk a few hundred meters through the inner city and the slogan “Anybody who doesn’t love Germany, should leave,” is sinking in. And then finally at the end of the street, stands a small, possibly 5-year-old girl holding her mother’s hand, and she shouts happily: “We are the people!” And after she is cheered for that, she looks back, along the never-ending line of demonstrators and says: “Mommy, so many are coming. It never ends.”

And the men and women laugh and wave and disappear again in the direction of Bannewitz, Lichtenau, Elsterwerda and Roßwein, places that may be heard from again soon.

Photo: Supporters of PEGIDA in Dresden

11 thoughts on “The Folk Festival of Racism”