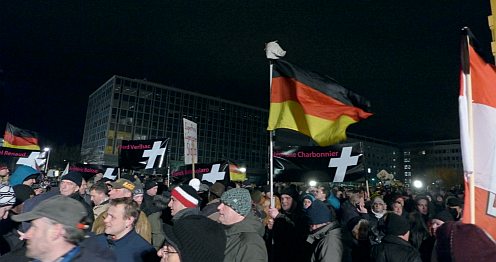 The German Social Democrats (SPD) are demanding that supporters of PEGIDA be suppressed by force of law to “protect the Constitution”. Although SPD is not Since SPD is currently part of the government, and given Chancellor Merkel’s rapidly eroding approval ratings, they may be dictating official policy fairly soon. So this is a significant development.

Nash Montana, who translated the article below, includes this note:

I think this is the start of something really really big. This woman — an Iranian-German, by the way — is demanding the pursuit of everyone who follows and supports PEGIDA, to the fullest extent of the law, “to protect the Constitution”.

SPD Planning on Going After PEGIDA for Being Anti-Constitutional

According to the SPD (Sozialdemokratische Partei Deutschlands, Social Democratic Party of Germany) Secretary General Yasmin Fahimi, supporters and followers of PEGIDA need to be pursued to the “fullest power of the police under the protection of the Constitution”, as there is the threat of “right-wing terror” emerging.

The SPD demands a strict crackdown by the police under the Constitution against the xenophobic PEGIDA movement. Last Saturday SPD General Secretary Yasmin Fahimi said, “gatherings of PEGIDA are meant to show concerned angry citizens.” But in reality PEGIDA is nothing more than an accumulation of “petty, hypocritical arsonists and seditious hate mongers.” And as such, “to protect our constitution, they have to be pursued by the police to the fullest extent.”

Fahimi made these comments at a small party convention of the Bavarian SPD in front of a crowd of 1,500 people. She said there are an average of two attacks per day on refugee camps and homes. “This is how right-wing terror grows, and we cannot underestimate this.”

The integration of refugees will last for years. “We have a decade of integration to organize […] And that is why we have to transform Chancellor Merkel’s ‘we can do it’ into ‘this is how we will do it’ in our government.” Therefore new teachers, new educators and new apartments on a massive scale are necessary. The SPD General Secretary emphasized that not all refugees will be able to stay in Germany. “We have to be honest, to be able to say, not everyone is entitled to a positive decision.”

22 thoughts on “SPD: Prosecute PEGIDA to the Fullest Extent of the Law”