I’ve often described the postmodern craze for Politically Correct Multiculturalism as a form of mass insanity. It seems that this commentary from Zukunfskinder agrees. Many thanks to Nash Montana for the translation:

For many citizens it seems that being German is something that presents them with extreme psychological strain. Merkel helps.

Case in point, a reader commentary from Focus:

“Johannes Schley: For the first time in my life I am proud of my country, and especially of our chancellor. Never before have I wanted to tell the world that I am a German. Despite the fact that I am proud of us and our fathers. On the contrary, it has always been a source of horrible embarrassment. And it always was accompanied by deep grief over our past. And now all these people of the world want to come to us. That, to me, is a beautiful miracle. And we have to thank our chancellor and her alone, since even among her own ranks she is being criticized and they talk bad about her motto “we can do it”. I stand fully behind Angela Merkel and I am excited, that she stood her ground at the Anne Will Show and that she stood by her word.”

Deep grief and a continuous feeling of embarrassment, caused by Being German — a human tragedy! Is it possible that external factors (parents, educators, teachers, political Sunday speeches, mass media) may have contributed to this syndrome? 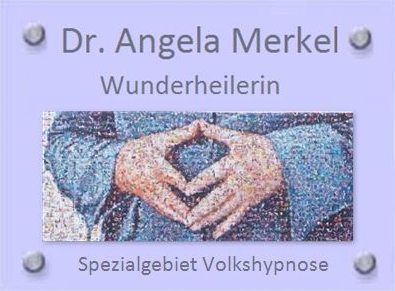 Quite obviously this reader never sought out professional help, but instead practiced self-abnegation. In quiet desperation he wasted away; never before had he purchased a foreign passport in Bulgaria or in Turkey. And now Focus was there, live, as he made a spontaneous recovery! Merkel was the remedy for his ailing soul.

How high are the estimated numbers of unknown cases? Are we to assume that the motivation behind the Willkommenskultur is a sort of mass psychosis?

In a recent large study with over 200,000 participants, it was determined: 14% of all participants had highly sensitive reactions to Merkel’s “We can do it” mantra. They all could be suffering from a psychological mass spell. 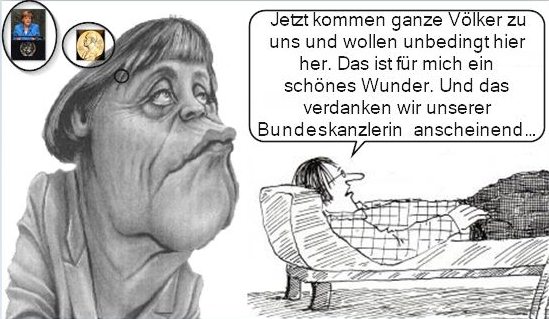 “And now all these people come to us and wanna be here so bad. That is such a beautiful miracle to me. And we have our Chancellor to thank for this supposedly…”

In the meantime even the Chancellor has prompted speculations as to whether she has psychological problems. She has “lost all her good senses”, and might even need professional help, some say. Can she be helped? Can those Germans be helped, for whom it represents a heavy psychological burden to be German? So far not a single politician has taken on this case.

While one part of the German population receives remote healing, the remaining healthy Germans are being plunged into madness. And the country is lying in ruins.