Our Israeli correspondent MC returns with an essay about the current media manipulations that have given us both the “refugee” crisis and the demonization of Israel. 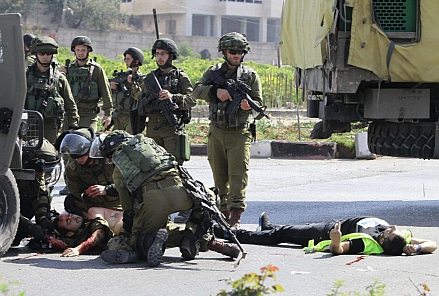 I get very bored when people tell me (which is often) that “Israel murders Palestinians”. Whilst it is true that Palestinians get murdered in Israel, what this statement fails to comprehend is that Israelis get gaoled for murdering anybody, including Palestinians, as in any civilized Western country, but unlike most Middle Eastern countries including the Palestinian Authority (PA).

The difference here is the relentless propaganda to demonise Israel.

Jews have been demonised down through the centuries; it is a historical fact. Every evil regime persecutes Jews, and in every aspiring evil regime, there is an increase in the persecution of Jews.

That said, most people are not born with Jew-hatred embedded in their psyche. It is placed there by nurture, which is essentially propaganda.

Jews particularly open themselves to negative propaganda. A minority of Jews are arrogant and self-righteous in a singularly narrow and offensive way, as can be seen from recent comments on this website. They, too, are mostly reacting to propaganda. They expect tolerance, but are not prepared to be tolerant in return.

It is this dichotomy which is at the heart of the East-West problem. In the West we are all taught to tolerate other people’s peccadilloes (within reason), but this does not tend to occur elsewhere, and certainly not in the Middle East.

Intolerance is a human emotion based on fear, it is thus a prime target of propaganda. Has a ‘white African” president of the USA increased or decreased racial tensions in the USA?

When a President says one thing (“I am a Christian”) but acts like he is a Muslim, it causes confusion and fear. We then need oceans of propaganda and not a little dissimulation to patch the gaping hole in his credibility. As an outsider, one gets the impression that the real, actual ruler of the USA is the (possibly criminal) Islamic organisation CAIR, and that the citizens of the USA are fed layer upon layer of lies and trickery to ensure the current political status quo. A status quo of a non-violent coup d’état.

Propaganda as such started in the UK. In 1906 the British Government did a secret deal with France calling for the UK to side with France in the case of another war with Germany. It should be remembered that relations between UK and France had been hostile for centuries, and after the Fashoda incident; not particularly warm, so this deal was kept under wraps.

When the time came for fulfilment of this obligation in 1914, the UK government had to ‘cover up’ its motives, so they created the ‘poor little Belgium’ story of rape and pillage by German soldiers.

Thus Britain went to war on the back of lies and deceit, and many young men paid for it with their lives.

In 1919 Edward Bernays basically merged propaganda and commercial advertising, using various manipulative techniques to ‘bend’ public perception on issues such as women smoking in public. The idea was to get you, the victim, to spend your money on something you would not normally spend it on.

With the advent of radio, advertising (and thus propaganda) became big business.

Political propaganda grew alongside of commercial propaganda. The human brain is wired such that we are creatures of habit, and this can be used for propagandistic purposes. If, by constant repetition, a meme, true or false, is embedded in the brain, it becomes a truism. Thus most people can be cynically manipulated, for example, to equate Jews (Israelis) with rats, and subsequently be convinced of the need for pest control. The rest is history.

So we are told endlessly that Islam is a ‘religion of peace’, and that the flood of Islamic warriors knocking at the gates of Europe consists of ‘refugees’ fleeing war. And you know what? It works. Germans (and Swedes) are already swamped, overwhelmed even, but thanks to effective propaganda they do not see the truth before their eyes. However, the indigenous poor are less distracted. They have to live with the filth and violence, but they have no voice; they are shouted down as ‘racist’ and offered no platform.

So how did ‘racism’ become the number one social crime? The answer lies in the spin given to Nazi doctrine in the immediate postwar period. The German people were taught by the Nazi propaganda ministry to ‘blame’ their hardships on Jewish bankers and capitalists, especially the defeat in 1918. Yes, the racism behind this was very old and already embedded in society; all that was needed was for the blame to be projected onto all Jews, not on those who were actually guilty (as, of course, a few were, along with their many non-Jewish colleagues). It was also necessary to demonize Slavs, as it was their lands that were required as lebensraum, the expansion of Aryan Germany into their god-given rightful living space.

At the same time as the Nazis were manipulating Germans, the Russian KGB was penetrating the media and education systems of the free Western world. In the immediate postwar period, the benign racism of the interwar period was amplified, by continuous distortion of the Nazi example, into the number one ‘hate crime’ of postmodernism. Nazi racism was focused on political and social need; modern ‘racism’ is a whites-only crime focused on the political needs of the KGB and its cultural Marxist successors.

The demise of Western cultures is predicated by the fear of the accusation of ‘racism’, with its negative associations with Nazism. This is the overarching victory of modern propaganda. It is this set of distortions that projects guilt onto an otherwise rational target group. I am not guilty of ‘white supremacy’, because the whole premise of the accusation of white supremacy is built upon the idea that we are all born equal, and that all cultures are equal. This concept is unproven, and moreover cannot be proven — except, that is, by propaganda. It is the product of a very clever and cynical set of lies and distortions aimed at bringing down Judeo-Christianity, the very root of Western success.

Part and parcel of modern propaganda technique is the necessity of omission. Whilst facts can be reported as such, the omission of pertinent data can render the report truthful but dishonest. So we see with the reporting in Germany of conditions in areas invaded by the latest wave of migrants. How is the Goebbels-era reporting of Jewish issues any different to the Merkel era reporting of immigration issues? One was negative and invented lies, the other was positive — because it left out anything derogatory — thus creating an untruth. The Goebbels lies preceded a war. What will be the result of the Merkel distortions?

The German people have just been shafted to the tune of hundreds of billions of Euros: the cost of open borders. And over the next ten years Merkel’s migrant lies are going to cost many more trillions of euros. One guess as to who will have to pay.

Hitler’s socialism was very expensive, for which reason he had to acquire the gold reserves of Austria, Czechoslovakia and Poland. How will Merkel cope?

It is propaganda at play which keeps the Merkels and Obamas of this world in power. Truth is hidden behind a smokescreen of mendacious words: words such as ‘hope’, ‘change’, ‘progress’, ‘liberal’, ‘Democrat’ and ‘Republican’. These words have become Orwellian doublespeak, a stinking hole of corruption, a rotten miasma emanating from a mass grave — ours!