We’re rolling on into the middle of our fundraising week here at Gates of Vienna.

To everyone who has chipped in so far: Thank you!

To those who have yet to give: It’s time to turn your pockets inside out and see if you can find anything besides lint!

What’s notable about the week’s effort up to this point is the modest level of individual donations — times are tough for everyone. However, the increase in the number of donations (quite a few of them from first-time donors) has made up for it. That’s the great thing about crowdfunding.

Dymphna’s excellent fundraising post last night (if you missed it, go here) reminded me of the days when she and I used to collaborate from time to time on posts. Nine or ten years ago, before I moved my office up here to the Eyrie at Schloss Bodissey, we would sit together in front of the computer with one of us typing (usually me) while we put together a post on something that interested us both. Each of us would throw out suggestions and phrases as we went along, revising and reworking until we were both satisfied. The final result was an amalgam, and even though we have distinct writing styles, when I look back at those old pieces, I can’t tell which portion was Dymphna’s and which was mine.

We were no spring chickens even then, and now we’re definitely Geezer Warriors of the Counterjihad. However, the most significant aspect of the current conflict is the Information War, and unlike a regular war, it’s not just a young man’s game. If your brain can still function — which mine can, at least some of the time — depth and breadth of experience can count for as much as youthful vigor in the propaganda trenches.

I suppose that makes us part of the 21st-century equivalent of Dad’s Army. 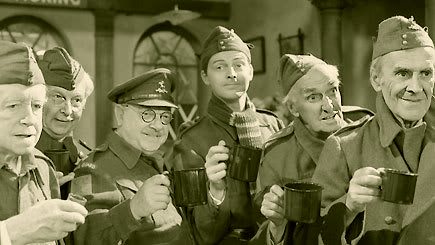 Which brings us around to the theme of this week’s fundraiser, which is “Home”.

“Dad’s Army” was a popular nickname for what was more properly known as the Home Guard. During the Second World War the institution functioned as a backup military auxiliary in Britain. The photo above is from a popular television comedy series called Dad’s Army that ran on the BBC while I was living in England in the 1960s.

British comedy programs (or, more precisely, programmes) that became popular at home were often adapted for the American market and shipped across the Atlantic. Two of the most famous ones from that period were Steptoe and Son, which became Sanford and Son in its stateside version, and Till Death Us Do Part, which became All in the Family.

But the same thing didn’t happen with Dad’s Army. The most likely explanation is that there was no equivalent American experience that could replicate the wartime context of the series. Since the War of 1812 (which was a small piece of the Napoleonic Wars), there has never been any real threat of a mass invasion of the Continental United States. During WW2 we had Japanese and German subs off our coasts, and spies and provocateurs who infiltrated our cities, but no one ever thought it likely that the massed forces of Hitler or Tojo would land on our shores.

The situation was quite different in Britain. After Dunkirk there was a very real possibility — considered by many a likelihood — that the Wehrmacht would launch a cross-Channel invasion onto the southern shores of England. With most of the regular army tied up abroad, the Home Guard was formed in an attempt to provide a buffer that could help hold off the Germans until regular military forces could be redeployed to Britain.

Dad’s Army included not just those who were too old for military service, but also young men who failed to meet the medical requirements for service, or were deemed unfit in other ways.

Initially the Home Guard was woefully short of modern firearms. Some units were equipped with halberds, hastily fashioned pikes, and other makeshift weapons. You can see visual gags based on those weapons in the following video, which features the intro and theme song for Dad’s Army:

Some of the older men in the Home Guard would have been veterans of the Western Front during the Great War, which ended a scant twenty-two years before Hitler stood on the cliffs of Normandy and stared across the Channel, pondering his chances. Roughly the same interval elapsed between the deployment of the Home Guard and the time Dad’s Army appeared on television. Just two generations had passed, the first one covering the period between Passchendaele and D-Day, and the second taking Britain into the post-Empire Socialist doldrums of the 1960s.

By then it was possible to laugh at all those old men and misfits who had been facing the horribly real possibility of street fighting and guerilla warfare. And in the 1940s the English, as always, had been ready to laugh at their predicament, even in the darkest days. That’s just one of the ways they coped with the dire events that engulfed them in times of crisis.

Another fifty years — two more generations — have passed since Dad’s Army convulsed television audiences. I’ve been away from England too long to know what makes Britons laugh nowadays. Possibly nothing — there are so many things that are now forbidden to make jokes about. A police charge and fine may await the unfortunate wag who utters an ill-considered politically incorrect quip.

But all that may change fairly soon. Britain, like the rest of the West, will soon be facing a new crisis, one whose grisly magnitude may match or exceed the horrors of two world wars. Britons will need to regain their sense of humor to face what’s coming. So let’s hope they can overthrow the suffocating PC regime and laugh like free men again.

And what about us, the Home Guard of the Counterjihad, the Geezer Army of 2015?

Will the next generation laugh about our antics with our virtual halberds and digital pikes? At our snapping at each other and doing pratfalls down the front steps of Islamophobia Hall?

Come 2040, will a series based on our silly exploits air on television (or in the holo-tank, or the feelies, or whatever they have then)?

Maybe by then everything will be in Arabic and Turkish.

Far Abroad: Australia, Denmark, Finland, the Netherlands, and the UK

Dymphna will see you here tomorrow.