This post by Carl in Jerusalem went right by me when he put it up in August. I try to look at his website every day…or rather, every “good” day I have, but this must have been posted on one of the other kind. Here is my mirrored version, sans links. Unlike the Baron, I can’t automate embedded links. But I urge you to go over to Israel Matzav to appreciate the wealth of sources he used in this essay: 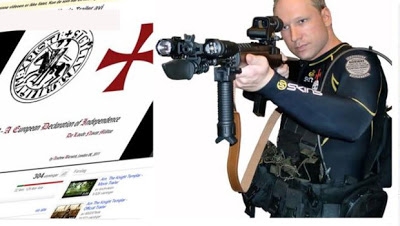 The Israeli ambassador to Sweden, Isaac Bachman, managed to touch off a storm by comparing the release of ‘Palestinian’ terrorists to an imaginary release of Norwegian mass murderer Anders Behring Breivik.

“The horrors that [the Palestinian prisoners] did, to put it in a Scandinavian understanding, it’s like what happened in Norway with Breivik,” he told SR.

“Imagine if Breivik was released as a gesture of some sort,” he added, explaining that Israel was not getting enough credit for agreeing to the release. “Research has shown that these people will return to crime. It’s not easy to get public support for releasing these people.”

But Swedes, who have more than their share of anti-Semites, don’t see the ‘Palestinians’ as mass murderers. They see them as ‘freedom fighters.’

“The comparison does not make sense,” added Bjørn Ihler, who survived the massacre by hiding on the southern tip of the island. “Breivik was a solo terrorist whose actions were based purely on an unreal situation. The situation in the Middle East is very different. There is a real fight for Palestinian freedom going on.”

“The comparison with Brevik is insane in several ways. Breivik is very special. These people that Israel is now releasing are freedom fighters, murderers, and in some cases terrorists, but they are nevertheless rather normal people,” he told the Aftonbladet newspaper.

Rather normal? Really? Let’s go back to the description of how Ronen Karamani and Lior Tubul HY”D (May God Avenge their blood) were found on that August night in 1990:

They were later found bound and murdered outside of Ramot in the northern end of the city.

The two youths, Ronen Karamani, 18, and Lior Tubul, 17, were last seen Saturday night at the close of the Jewish holy day when friends dropped them off on a main road leading north from Jerusalem.

They had said they intended to hitchhike to the home of Tubul’s girlfriend, who lives in the northern suburb of Givat Zeev and was about to leave on vacation in Eilat.

When the two youths did not arrive, police were notified, and search parties were organized. Helicopters, trained dogs and professional trackers took part in the search.

About 1:30 p.m. Monday, searchers found the bodies about 20 yards apart in a ravine off the road. One bore about 50 stab wounds, witnesses said, and the other’s skull had been bludgeoned.

“The way they were tied down, the way they were stabbed points definitely to a political murder,” Turner was quoted as saying. “There was no reason to think that these two normal, good teen-agers were murdered for any criminal reason.”

Late Monday, police began a massive search for the killers, believed to be Arabs who picked the boys up on the road. Nearby villages were placed under curfew.

And recall this story from the Munich Olympic Massacre, funded by none other than Abu Mazen.

Guri Weinberg, the son of murdered Israeli wrestling coach Moshe Weinberg, on why the International Olympic Committee will never honor the 11 Israelis who were murdered at the Munich games 40 years ago.

In 1996, I, along with other Munich orphans and three of the widows, were invited for the first time to the Olympic Games in Atlanta. Before the Opening Ceremony, we met with Alex Gilady. Gilady has been a member of the IOC’s Radio and Television Commission since 1984 and has been the senior vice president of NBC Sports since 1996.

I have known Mr. Gilady since I was a kid; in fact, I grew up with his daughter. He had been supportive in the past regarding our plea for a moment of silence during the Opening Ceremonies, so we arrived with high hopes. Gilady informed us that a moment of silence was not possible because if the IOC had a moment of silence for the Israeli athletes, they would also have to do the same for the Palestinians who died at the Olympics in 1972.

My mother said, “But no Palestinian athletes died.”

Gilady responded, “Well, there were Palestinians who died at the 1972 Olympics.”

I heard one of the widows say to Gilady, “Are you equating the murder of my husband to the terrorists that killed him?”

Then Ilana Romano burst out with a cry that has haunted me to this day. She screamed at Gilady, “How DARE you! You KNOW what they did to my husband! They let him lay there for hours, dying slowly, and then finished him off by castrating him and shoving it in his mouth, ALEX!”

Alex Gilady, as you might recall, is an Israeli who led the Israeli media delegation at the 1972 Olympics. Avery Brundage, who was the IOC President who infamously said in 1972 ‘let the games go on,’ was a Nazi.

This is what Swedes and Norwegians consider ‘normal’? You bet, as long as it is only happening to Jews. Then again, they don’t appear to place too much value on their own lives either.

Breivik is currently serving a minimum 21-year prison sentence for killing 77 people and wounding 242 others in a gun and bomb massacre in Norway in July 2011.

19 thoughts on “Compare PoorPali™ Terrorists to Breivik? The Nerve!”