The following account of an Orthodox Christian priest who was persecuted in Germany is appalling for two reasons: (1) the incident itself, and (2) the virulently PC account of what happened as published in Die Welt.

It was all I could do to finish reading the story, because I kept wincing every time I encountered another politically correct trope. The article trots out just about every PC/MC meme in the journalistic style book, including:

…and possibly others that I failed to notice.

For years, the Orthodox priest Aleksejs Ribakovs was harassed because of his religion — apparently by Muslims. His is no isolated case. The Association of Christian Churches is now demanding consistent action against such instances. 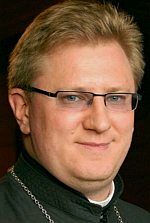 Why in the world is Aleksejs Ribakovs sitting here? In this Düsseldorf restaurant, with his cup of coffee, telling a journalist how he was driven out of his own neighborhood because of his Christian faith? Ribakovs shrugs his shoulders and says: “Maybe because I was not driven out of Iran, but out of Bochum[1].” And possibly also because the perpetrators persecuted him — the Russian Orthodox priest — out of obviously religious motives.

“That could be,” he says, and adds immediately: “But I have nothing against Muslims. I am not angry.” And the 33-year-old priest gives such a friendly-concerned look through his glasses, that you can hardly doubt it. No, he will not tolerate any bad feelings in himself. Though he has all kinds of reasons for them.

It is a Sunday, going on 6:40 PM, when Ribakovs gets out of his car and goes to the house he is renting with his family. He has just celebrated mass, so he is wearing a black cassock with a large silver cross. In his right hand is a case with communion for the sick and liturgical books, in his left his mass vestment.

Then he sees three young men. Directly before his front door. One of them looks at him angrily and asks in broken German: “What is that you’re wearing, old man?” Ribakovs walks on, but instantly someone jumps him from behind and pushes him into the hallway. “I’ll beat you up so that you won’t be able to make a police report,” he says.

Then fists rain down on his chest and sides. A youngster spits massively into his face; they call him a “s**t Christian” and a “s**t priest.” And finally the leader says: “So” — pointing at the cassock with the cross — “you don’t show up around here anymore, capiche?”

When Ribakovs pulls out his cell phone and calls the police, the strangers flee. And, as he is still wiping the spit from his face, Ribakovs thinks: “This is too much.” Years ago, in fact, several Orthodox Christians had left the multicultural settlement — also because they felt persecuted on account of their faith.

And Ribakovs himself has been harassed for about five years in his residential district. In 2008 alone, he had to go to the police three times, because out of the 15 or 20 cars in the parking lot, his car was always being picked: once it was broken into and Christian music CDs taken out and stomped on; once it was urinated on.

Sometimes more disgusting things happened. And, as he tells it, whenever Ribakovs wore his cassock, he was insulted or looked at deprecatingly by women with headscarves and men “of oriental origin,”[2] as they spat at his feet.

But this time the Bochum police search was successful. Only a few days later, they caught a suspect who made a partial confession. A young, 17-year-old ethnic Turk. According to the police spokesperson, the accomplices could not yet be determined.

And yet the echo of this incident was that much clearer, after the police had informed him. Not only did the Union of Christian Churches (ACK) warn that such incidents threatened to strain the interreligious climate and must be resisted more systematically than before.

On Islamic websites too, the attack on the priest was seen in a larger context. Similar incidents from all over Europe were enumerated, where Christians were driven out because of their faith. And there were descriptions of how Muslims who had converted to Christianity were living permanently with death threats. In short: driving Christians out was gaining momentum — and now in Bochum too.

When Ribakovs saw his name and photo in the context of a rising religious war, he was horrified. What bothered him most was what he perceived as a too-sharp tone, this subliminal “That’s what they are all like, these Muslims.”

For naturally, of the approximately four million Muslims in this country, only a tiny minority is noticeable for its hostile, criminal acts against Christians. Only a few dozen of that kind of attacks have been documented. On the other hand — isn’t that too many? And wasn’t Ribakovs himself shocked that such hatred of Christians is possible in a country based on Christianity?

That is why Ribakovs prayed — even as he stood horrified in his front hall and watched the fleeing perpetrators — that God would give him the strength to forgive them. And in fact, as he sits and sips coffee in the restaurant, he affirms that he is not angry. He feels compassion for the youths, who are likely too down-and-out to find a respected place in society.

As if he wanted to drive anger out of himself, he recalls that sometimes (nominal) Christians are the perpetrators and Muslims the victims, as with the Muslim woman, Marwa El-Sherbini, who was stabbed to death in Dresden by a right radical Islam-hater.

Aside from that, Ribakovs keeps in mind how many likable Muslims he knows himself. For instance his school friend, Ruslan, a Tatar, who encouraged him in his desire to become a priest, Or his neighbors in Querenberg, for example the Iraqi from the seventh floor. When he learned what had happened to Ribakovs, he hastened to tell him: “Show me the boys, and I will have a talk with them.” Or the ethnic Turk from the sixth floor who always greeted him so politely and at Christmas wished him a “happy holiday.”

Besides friendly feelings for many Muslims, however, the priest is also driven by something less pleasant — fear. Ultimately, incidents like this could spark hatred. Not only on the part of non-Muslims but also “in Islamists who see their religion brought into opprobrium by my story.”

Therefore, he would not publicly claim that he was attacked by putative Muslims. He would only characterize the culprits as “disrespectful half-psychopaths.” And then for a moment, Ribakovs is not peering through his glasses in a friendly-concerned manner, but seriously and urgently. “I owe my family this caution. Do you understand?”

At this moment, the priest is transformed into the caring father and husband. Who could hold that against hum?

And it is a feeling of responsibility for his family that is driving him out of Bochum-Querenburg. The new apartment has already been found, the rental contact signed, his daughter registered in school. Naturally far from Querenburg. But no matter how much this move protects his family, in one respect Rubakovs is haunted by it: The culprits could now count his change of domicile as a success, a victory.

And suddenly, Ribakovs knows why he is sitting here in the restaurant — with a coffee that has meanwhile become cold — and telling his story. Because no one should believe that those who were driven out will still be quiet in the face of violence. No, everyone should know what happened there in Bochum-Querenberg.