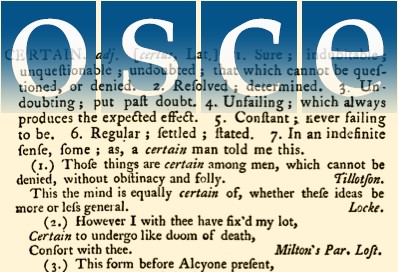 The Tyranny of Bad Definitions

When working with topics as important as fundamental freedoms, it should be self-evident that one needs to apply very high standards of precision, caution and democratic principles. Failing that, the powerful tools of international law and human rights instruments may potentially fall prey to hostile intentions and misuse.

Overly broad or purposefully vague definitions lend themselves to misuse by enemies of free, secular societies, as has historically been the case in non-democratic societies in the past. Possibly the best known example of this is the term “enemy of the working class”, used by the Soviet Union to discredit, stigmatize and persecute the critics of a fundamentally broken system. As long as the Soviet system retained moral authority, this strategy worked. When the system was exposed, it failed.

In order to promote a genuine rule of law, democracy and freedom, the tools of international law need clear definitions and clear limits to the power that authorities hold over non-criminal citizens. In case of doubt, it is best to err on the side of caution — that is, on the side of less control, restriction and punishment, and in particular to uphold the principle that one is innocent until proven guilty.

Unclear definitions can be misused by governments and other institution of power to repress, marginalize and stigmatize inconvenient persons, their opinions, or even the topics they intend to discuss. Good laws and guidelines protect against such attacks on freedom of expression and media, whereas bad (usually overly broad) law will be used by enemies of freedom to further their goals.

We need to be able to recognize and counter such problems and strategies now, as we did before.

A side effect of the free exchange made possible by modern Internet media is that a mob mentality can arise in mere minutes, no longer moderated by the time it would traditionally take to print and distribute paper media. While this new freedom for everyone to express themselves is a fundamental good, it does place a special responsibility on media, and state/international actors in particular, to work and express themselves in a neutral manner, and in particular to have the courage to stand against even massive waves of negative opinion when the facts on the ground warrant it. An example would be the way the Danish government remained firm in the defense of free speech during the Mohammad Cartoon Crisis in 2005/2006.

States, state media and international actors carry a special responsibility in this area. These institutions are funded by taxpayers’ money, and it is routinely assumed that documents and statements from such sources carry great expertise and authority. This also implies that if enemies of freedom and democracy are able to find loopholes in official definitions, documents or laws, those flaws may be exploited to work against the fundamental OSCE principles of freedom and democracy.

The appendix of this paper is a list of terms frequently used in international human rights work, including OSCE documents such as the Annotated Agenda for this conference. Some terms, such as Discrimination, have well established meanings which can be looked up in dictionaries. Others, such as Rightwing extremism, are defined by the institutions that use them.

Note that some terms, including Bias and Incitement, have one definition in general use, but a different definition when used by OSCE or other international institutions. This duality of definition is problematic, for the causal reader will apply the commonly used definition, while the document actually uses a different one. This divergence of meaning can be used by parties hostile to freedom and democracy to create documents with facially neutral language that can be exploited to subvert freedom in our societies. Examples of this include the documents for the Istanbul Process and the Rabat Plan of Action, which are built on the term ‘Incitement’ from article 20 of the International Covenant on Civil and Political Rights.

Even a quick reading of the appendix should make it clear that many problems exist. For example:

Each term in the list could usefully be analyzed in depth for potential hazards and negative legal consequences, but space here does not permit that. Such analytical work must be based on fundamental and founding OSCE principles, with the aim of furthering free societies where people, including children at school, do not have to fear the consequences of expressing themselves freely.

Looking more closely at ‘Discrimination’, it is obvious that it makes no sense to try to eliminate all forms of discrimination. The ability to distinguish good from evil is very much needed, and the ability to discern in what way things are different is most useful as well. There can be no doubt that female genital mutilation is evil, and that every humane person or system must be against it. Likewise, just as an apple is not an orange, a Muslim is certainly not a Jew.

What needs to be eliminated is unfair discrimination, explicit or implicit. An example of explicit discrimination was the segregation laws that used to exist in the United States. Here, a single brave woman, Rosa Parks, ignited a successful movement against these rules. Explicit discrimination has been reintroduced in several OSCE countries, most notably in Great Britain, where private Sharia courts implement a legal system alien to modern, secular societies. This legal system is, according to the European Court of Human Rights, contrary to principles of democracy and human rights.

Implicit discrimination, however, is much harder to deal with. It is reported, for example, that no non-Muslim can hold a commanding position in the Turkish Armed Forces, but it is difficult to prove that this is so. Fortunately, Turkey could easily prove by example that this is not the case.

But if we extend the quest to eliminate all forms of discrimination into the private realm, we encounter various problems based on principle. Private actors, whether they be individuals, associations or corporations, have a fundamental right to decide who to associate with, who to trade with, who to invite into their homes, and who not to have any dealings with. A private actor is not bound by the same obligation of non-discrimination that applies to the state or other public institutions, and does not have to answer to anyone for his decisions, within the limits of the law.

If we were to apply the attempt to eliminate all forms of discrimination to everyone and all aspects of life, we would create a totalitarian society with very little freedom left for the individual.

Actually, a truly free society is to a great extent self-regulating with respect to unfair discrimination. For example: Suppose a company refused to employ a highly qualified person due to irrational discrimination. This gives competing companies the opportunity to hire the same person, and thus gain a competitive advantage in the marketplace, effectively rewarding companies that do not discriminate unfairly. No specific law against discrimination would be needed, merely the upholding of freedom in society.

Unfortunately, appreciation of the simple elegance of free societies appears all but lost by now.

When the German government and large corporations such as Facebook agree on a “control first” culture against statements that could potentially offend some individuals, they are fully in line with the Istanbul Process and the Rabat Plan of Action, at the expense of fundamental freedoms.

OSCE is in a position to counter such developments, given its resources and the immense moral authority from its efforts against the Soviet Union. However, in order to be effective in this new battle for freedom, great clarity and courage is needed. Clarity to identify and avoid the use of overly broad definitions, and courage to restrain from intervening in the workings of a free society.

Specifically, using overly broad definitions of what constitutes criminal or otherwise illegal behaviour is in itself a violation of Rule of Law, and should not be permitted in free societies. Unfortunately, the collective theme, as also reflected in the Annotated Agenda, has become that more control is needed in order to avoid offending certain groups and thus reduce the threat of terrorism. And it takes great courage to run the risk of going against such collective trends.

Quoting Lew Rockwell from the foreword of “The Case for Discrimination” (Walter Block, 2010):

Every age offers its own version of a false moral code. Just as Tom Sawyer thought that he was surely evil for being tempted to free a slave, we too live with incredible illusions about right and wrong, as it applies to the civic realm.

At the end of the day, seeking to control the details of how citizens may or may not express themselves cannot constitute the Rule of Law, cannot constitute freedom. Much of what we are seeing behind the profusion of poorly defined terminology is our old enemy: Orwellian Tyranny.

Note: The Merriam-Webster dictionary has been used as the primary source for definitions of these terms. If this highly regarded encyclopedic work does not define a given term, it should be considered a flag of warning that the term may be quite poorly defined, and thus particularly prone to exploitation.

Quote: “Political conservatism, for example, was found once again to be correlated with opposition to policies to assist blacks and with support for negative images of blacks as lazy and irresponsible.”

Speech that attacks, threatens, or insults a person or group on the basis of national origin, ethnicity, color, religion, gender, gender identity, sexual orientation, or disability.

Hostility toward or discrimination against Jews as a religious, ethnic, or racial group

Principle of Equality: No generally accepted definitions appears to exist. If the intention is to say “Equality before the law”, this term should be used instead.

A tendency to believe that some people, ideas, etc., are better than others that usually results in treating some people unfairly

Bias motivations can be broadly defined as preconceived negative opinions, stereotypical assumptions, intolerance or hatred directed to a particular group that shares a common characteristic, such as race, ethnicity, language, religion, nationality, sexual orientation, gender or any other fundamental characteristic.

Article 20 of the International Covenant on Civil and Political Rights reads that “Any advocacy of national, racial or religious hatred that constitutes incitement to discrimination, hostility or violence shall be prohibited by law”. Throughout the text this will be referenced as “incitement to hatred”.

States are also obliged to “prohibit” expression that amounts to “incitement” to discrimination, hostility or violence.

To describe or regard (something, such as a characteristic or group of people) in a way that shows strong disapproval.

Belief in and support for ideas that are very far from what most people consider correct or reasonable.

“Rightwing extremism in the United States can be broadly divided into those groups, movements, and adherents that are primarily hate-oriented (based on hatred of particular religious, racial or ethnic groups), and those that are mainly antigovernment, rejecting federal authority in favor of state or local authority, or rejecting government authority entirely. It may include groups and individuals that are dedicated to a single issue, such as opposition to abortion or immigration.”

The use of violent acts to frighten the people in an area as a way of trying to achieve a political goal.