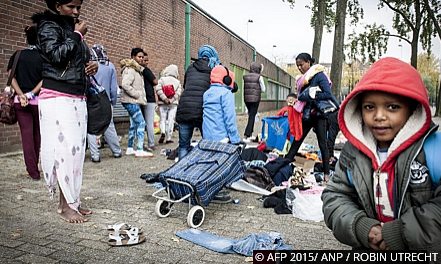 Someone in the Dutch government has evidently put his finger to the political wind and detected which direction public opinion is blowing. The actions of the State Secretary of the Netherlands are designed to discourage further “asylum seekers” from coming to the Netherlands, and maybe, just maybe, induce some of those already on Dutch soil to return home.

His new policies are, of course, too little, too late. This meager attempt to make the “refugee crisis” go away will scarcely make a dent in the throngs of immigrants now flooding the Low Countries and the rest of Western Europe. Voters know full well who visited the current mess upon them, and their electoral ire will hardly be assuaged by pathetic half-measures. I’m certain that two words will feature prominently in their minds the next time they enter a voting booth: “Geert Wilders”.

Below are excerpts from an article at the NL Times:

On Monday State Secretary Klaas Dijkhoff sent a letter to the refugees in the Netherlands in which he explains that the asylum process will take longer and that they will have to spend more time living in asylum centers. The Association of Dutch Municipalities thinks it’s great that the State Secretary sent the letter, but finds that more clarity is needed.

In the letter Dijkhoff explains that there is not enough room in the regular reception centers for the large number of refugees arriving in the Netherlands. “That is why you are receiving an austere reception, such as in sports centers or tents, were many people share the same lodgings.”

He also explains that the large number of asylum applications means that the “reception system is very busy and the asylum procedure takes a long time”. It takes about half a year before an application is processed. If it is then determined that further investigation is required, it can take up to another six months before a decision on whether or not a residency permit will be issued is made.

[Katwijk Mayor Jos] Wienen also described the tone of the letter as “cool, but that is the State Secretary’s choice”. He added that the content of the letter radiates the political debate in The Hague last week, during which the governing parties called for a more austere reception. “Perhaps Dijkhoff thought that he could use kind words to give the impression that everything can be done faster.”

Many asylum seekers like you are currently coming to the Netherlands. As a result, the reception system is very busy and the asylum procedures take a long time. I understand that you want to get a clear picture of your future as soon as possible. I will gladly describe what you can expect in this letter.

Currently, the Netherlands does not have enough room for asylum seekers at the regular reception centres. That is why you are receiving an austere reception, such as in sports centres or tents, where many people share the same lodgings.

Unfortunately, it is impossible to tell you on short notice whether you will be granted an asylum residence permit with which you can temporarily stay in the Netherlands. At present, it takes almost half a year before your application can be processed. Only then will the procedure serving to reach a decision on your application be initiated. This is assessed carefully for each person. Moreover, further investigation will be required. This can take an additional six months or longer.

Once it is decided that you cannot stay, you must leave the Netherlands immediately. In that case, we can assist you in your departure.

If you are permitted to stay, you will be granted a temporary residence permit. At this moment, there are not enough houses for everyone. It is therefore possible that you will have to remain in asylum seekers’ residence centre, even if you have already been granted a temporary residence permit. Available accommodations can also consist of a container house or a converted office building. It is possible that you will have to share these accommodations with other people.

I trust that the above provides you with sufficient information.

The State Secretary of Security and Justice

Read the rest at the NL Times.

18 thoughts on “A More Austere Reception”