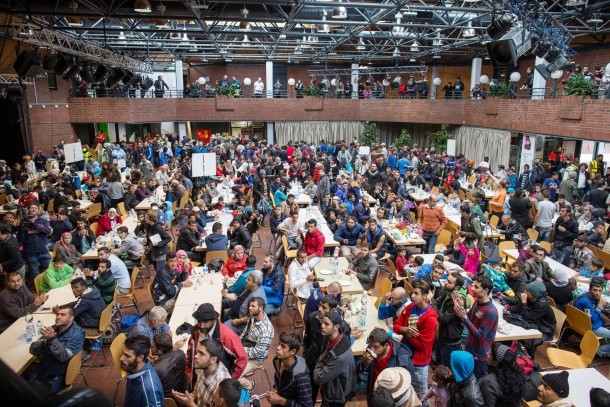 More than two hundred mayors of municipalities in the German state of North Rhine-Westphalia have written a letter to Chancellor Angela Merkel demanding that she immediately enact measures to bring relief to German communities suffering under the burden of the massive “refugee” influx.

Only the mayors of smaller cities and towns signed the letter — that is, those who are suffering the most devastating consequences of the migration crisis.

Many thanks to Nash Montana for translating this article from Die Zeit:

215 Mayors write a Letter of Urgency to Merkel

The possibilities for housing refugees are exhausted, write Mayors from North Rhine-Westphalia in a letter to the Chancellor. The communities are hopelessly overwhelmed.

215 Mayors from communes and small cities in North Rhine-Westphalia (NRW) have sent a distress signal to Chancellor Angela Merkel (CDU) and SPD Minister President Hannelore Kraft. In the face of still rising numbers of refugees they have “great worry about the country and the cities and communities we represent,” they write in a Brandbrief, a “flame letter” of utmost urgency (Direct link to the letter). The letter was published in the Rheinische Post.

Every single housing facility has been exhausted; even the housing of refugees in tents and living-containers is barely manageable anymore. The operation of these communal housing facilities, in very considerable ways, ties down existing personnel. “And this leads to a case where we cannot follow up or satisfy other communal duties, or that we can only handle them in very restricted ways.”

The bill that was enacted in October to expedite asylum procedures was a step in the right direction, but it will not lead in a timely manner to a noticeable decrease in numbers. The federation had announced a month ago in a meeting with the Chancellor that they would create 40,000 new spaces for new asylum seekers. Furthermore, beginning in 2016, all federation counties would get the amount of €670 per month per refugee.

But this is not enough for the signatories of the letter. They attached a list of eight stipulations to the letter. Among them, they demand that the Federal government has to expand the border patrol. Refugees that are coming in from safe, non-war torn countries, have to be prevented from entering the country; they need to start the asylum process from their home country. The mayors also demand a quota for redistribution of the refugees on the entire EU and a yearly maximum limit on refugees that are allowed to immigrate.

The Mayors also demand relief for communes: The Federation has to step up and increase care and management for at least half of all refugees in NRW and be responsible for their deportation if their application for asylum is rejected. And lastly, they demand discussion and enactment of a new immigration act.

Translation of the letter to the Chancellor:

We write to you with great worry about our country, and worry for the cities and communes that we represent. The reason for this is the massive and considerably uncontrolled influx of refugees into Germany and into our towns and communities.

It was a step in the right direction to enact an acceleration of asylum procedures on October 15, 2015. The new law among other things seeks to decrease the influx of refugees, but also includes the plan to appoint communal resources for housing and integration more intelligently, towards those refugees who have a right to asylum. However, it is questionable whether these measures will result in the desired impact in a timely manner. It is feared that despite the new regulations, Germany will continue to be attractive to refugees. Since the multiple active crisis zones in the world are increasing rather than decreasing, it is in fact fully expected that the influx of refugees will continue at the highest level.

The massive influx of refugees into our towns and communities has lead to a complete exhaustion of all housing opportunities. Even the housing of refugees in tents and living containers is barely manageable anymore. Operation of these communal housing facilities, in very considerable ways, ties down existing personnel. And this leads to a case where we cannot follow up or satisfy other communal duties, or that we can only handle them in very restricted ways.

We welcome the fact that you engage yourself in combating the sources of this migrant crisis as well as that you are committed for a fair disbursement of refugees on a European as well as on an international level. We are well aware that this level of engagement necessarily requires protracted negotiations and proceedings. As a consequence, you are hardly suited to limit the far too high influx of refugees in a timely, noticeable manner.

It is therefore necessary that further steps be taken in the bill for the acceleration of asylum.

Hence we ask you to please read and enact the attached list of measures in a timely manner.

[Translator’s Note: The attachment with the list of demands is not visible, and I could not find it online.]

22 thoughts on “A Mayors’ Revolt in North Rhine-Westphalia”