Dr. Phyllis Chesler is a leader in the field of research into some of the “cultural” practices that harm (mostly) Muslim women who are forced to live with Damocles’ sword hanging over their young heads. In this report she mentions other sects, Yazidis in Iraq, Sikhs in India, etc., but might one not consider these outliers simply to be cases of cultural contamination? In other words, where Islam is the dominant culture it could well be that some of its more deleterious views of the world and woman’s place in it eventually skew other religions and cultures living cheek-by-jowl with overbearing Islam. Whatever the cause, women in these cultures are at risk in ways that Christian and Jewish women don’t face within their communities (though some ultra-Orthodox Jews and Christians have similar views on the inferiority of women. However, that’s not the common practice for the majority and it’s not aligned with so-called “honor” and its subsequent murders of family members).

What follows is an excerpt of Dr. Chesler’s latest report with some of my own interpolations. I eliminated both the footnotes and the charts, but they are available at the original site. All the emphases in these excerpts are mine; they do not appear in the original work.

Dr. Chesler’s latest findings, published in the current edition of The Middle East Forum, are an unblinking, updated gaze into the reality of butchery before after perceived dishonor for the victims caught in the snares of this primitive barbarity.

Female-on-female violence has been minimized because male-on-female violence is far more visible, dramatic, and epidemic. However, women sometimes kill infants, spouses, and adult strangers, including other women. Indeed, as this study shows, women play a very active role in honor-based femicide, both by spreading the gossip underlying such murders and by acting as conspirator-accomplices and/or hands-on-killers in the honor killing of female relatives.

In order to explore this phenomenon, this author conducted an original, non-random, qualitative study of 31 honor killings (26 cases) in North America, Europe, India, and Muslim-majority countries, where women were named as hands-on killers and/or conspirator-accomplices in the media.

One case she cites is notable for the numbers of female family members who died at the hands of just one “Canadian” matriarch. Under an image of this woman and her male accomplices is the legend:

Female perpetrators and accomplices in honor killings, like their male counterparts, can be calculating, brutal, and without remorse. Tooba Yahya Shafia (center) of Canada was directly involved with her husband and son in the murder of three of her daughters and her husband’s first wife.

Even if you’re numbed by the years of more generalized reports we’ve been posting, that vignette chills the heart.

Dr. Chesler notes some geographical differences underneath the similar motives for these barbarities:

The Narratives behind the Facts

The above statistics tell only part of the story. What emerges from the narratives of these cases is that the majority of both hands-on killers and conspirator-accomplices blamed their victims for their gruesome fate and are calculating, cold, and self-righteous women. Both female hands-on killers and conspirator-accomplices physically and verbally abused, monitored, and stalked their victims, warning them of dire consequences if they failed to obey the rules. Some issued clear death threats.

One example here; there are others at the site: 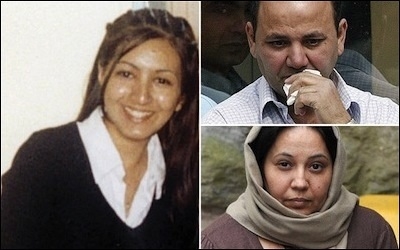 Shafilea Ahmed was a 17-year-old Pakistani-Muslim-British girl. Her parents carried out her slow suffocation murder in front of their other young children, warning them that they “would be killed if they ever revealed the truth.” Almost a decade later, perhaps fearing for her own life, Shafilea’s sister Alesha approached the police. She said their mother “began the attack with the words ‘Just finish it here.’” During the murder, the mother said to one of her younger daughters, “You will be next” and “Shut up, or you are dead.”

I don’t have the heart to cut and paste the other stories Dr. Chesler collected, but there is one which stands out to me as a possible case of envy rather than “honor”;…

…a raging jealousy by the ageing woman facing the fact of her young daughter’s liveliness. There is a compelling image of a woman whose grim visage makes her a candidate for concentration camp commandant. Looking at her picture, you can’t help but wonder if she tortured and murdered her daughter from less “pure” motives than “honor”. That is, was her daughter young, lively and beautiful? Was her existence a painful reminder to an aging mamma that any attractiveness she herself had once possessed was long gone?

Seventeen-year-old Rofayda Qaoud was raped and impregnated in her West Bank home by her two brothers. According to news reports, “Relatives and friends refused to speak to her family. Her elder daughters’ husbands wouldn’t allow them to visit [the family] because [Rofayda] had returned home.” Finally, her mother Amira perpetrated a torture-murder and then “purged her home of all pictures of her older children.”

Obviously, not all women possess in equal amounts whatever it is that sparks the maternal heart.

Those of us women who were abused in our young adult years by once-loving husbands who turn to control of their wives and children to compensate for their own failures can empathize with these unfortunate girls. However awful our lives were, they couldn’t compare with the victims in Dr. Chesler’s report. We may not have been able to leave safely — often due to cultural constraints — and some of us were killed for not leaving soon enough, or not finding a safe exit, but our suffering can’t compare to the toxicity of Islam’s propensity for killing its young.

That is a perversion Westerners will never comprehend.