It’s been fourteen years since the Manhattan skyline was changed so suddenly and so drastically and so permanently, all in the space of a few short hours.

First there was this:

Then there was this:

And finally there was this: 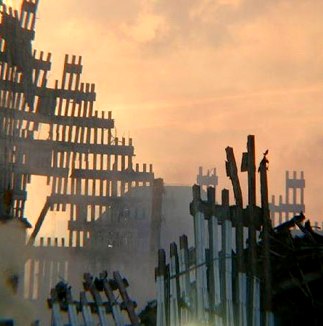 You’d think the dust would have finally settled by now, but it hasn’t.

This war had been going on for a long time before September 11, 2001. What happened that day just made it more evident, at least to those of us who were willing to take a close look at what was happening. However, the fog of war has only become more thick and impenetrable since the day that toxic mix of dust and smoke clouded lower Manhattan.

During the intervening years agents for the Muslim Brotherhood have intensified their penetration of the American government and military at all levels. The soothing recommendations murmured by them into the ears of politicians and bureaucrats routinely become official government policy.

In the fourteen years since 9-11 if has become much more difficult to say anything negative about Islam in public without losing one’s job or being sued by a well-funded Muslim organization.

During those same years, and especially since the accession to the throne of Barack Hussein Obama, the importation of Muslim “refugees” (and the exclusion of real Christian refugees) has accelerated, with tens of thousands of them arriving every year from the most jihad-prone regions on the planet. The federal government has been quietly distributing them to communities throughout the United States, forcing localities to cope with them, and eventually to pay for their upkeep.

No, the dust hasn’t settled yet. Not by a long shot.

The mujahideen of the Great Jihad walked out of that cloud in Lower Manhattan alongside the firefighters. For the time being they’re wearing business suits rather than masks, and carrying portfolios rather than automatic weapons.

9 thoughts on “When the Dust Finally Settles”