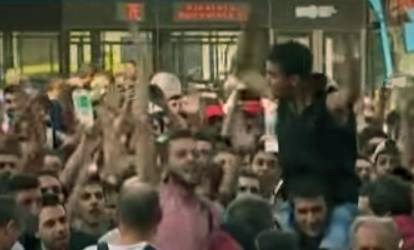 Our Polish correspondent Green Infidel has translated an account of an incident of culturally enriched mayhem that occurred recently at the border crossing between Italy and Austria. These are the same mischievous “youths” that those high-minded Dutch ladies of Apeldoorn are singing “you are welcome” to.

On a Polish website I came across this fresh account of a worrying incident on the Italian-Austrian border. ‎The article concerns a blog post by a Polish travel writer, who at first hand witnessed (and was threatened by) the migrants attempting to reach Austria.

From experience, I’ll add that it’s precisely incidents such as this, witnessed by Poles while abroad or recounted by friends or family members, that help put Poland among the nations with the least interest in any “refugee resettlement” in their country.

The entry was posted on the author’s Facebook page yesterday, so the incident would have happened on Thursday night‎. Btw, the author, Kamil Bulonis, is gay and proudly displays a “rainbowed” profile picture on his Facebook… Hardly a “far-rightist”! Here’s his profile.

“They tried to overturn the coach, in which I was travelling with a group. Excrement was thrown in our direction… they banged on the doors, to get the driver to open them. They spat at the windows.” — such is the report of Kamil Bulonis, the author of a travel blog.

It’s difficult to accuse the author of this entry, who writes a blog called “Obywatel Swiata” [Citizen of the World], of right-wing, Catholic or nationalist “looniness”. For Kamil Bulonis writes about himself openly on Instagram as a “journalist, globetrotter, gay”, while on Facebook, his profile picture appears in rainbow colours.

Last night Kamil Bulonis posted a report of his journey from Italy by coach. It is so moving that we are pasting it in full. Especially given that we cannot rely on mainstream media to break with their common narrative about “bad Hungarian nationalists” and “poor immigrants”.

One and a half hours ago, on the border of Italy and Austria, I saw with my own eyes massive incidents involving immigrants… in all my solidarity with people finding themselves in a difficult life situation I must say, that what I saw breeds fear…

This great mass of people — sorry that I write this, but it’s an absolute horde. Vulgar words, thrown bottles, loud cries of “We want Germany” — is Germany at present some kind of paradise? I saw how they surrounded the car of an older Italian lady, pulled her out by her hair and wanted to drive off in that car. The coach I was on in a group, they attempted to overturn. Excrement was thrown at us, they banged on the doors, so that the driver would open them, they spat at the window… I ask, for what purpose? How can this wild horde assimilate in Germany? For a moment, I thought I was in a war…

I really feel sorry for these people, but if they were to reach us [Poland] — I don’t think they would receive any understanding from us… For three hours we waited at the border, which ultimately we did not cross. The whole group was escorted back to Italy in a police cordon. The coach looks destroyed, covered in excrement, scratched and with broken windows. And this is the idea to solve our demographic issues? These great, giant regiments of barbarians? Among them, there were almost no women, no children — the overwhelming majority were young aggressive males…

Yesterday, reading the news on all the websites, I was still subconsciously caring, worried about their destiny, but today, after what I saw, I am simply afraid, but happy at the same time that they do not choose our nation as their destination. We Poles are simply not ready to accept these people — not culturally, and not financially. I don’t know if anyone is ready. A pathology is entering the EU, which up until now we never had a chance to see. And my apologies to anyone I may have offended anyone with this entry.

Finally, I’ll add that cars arrived containing humanitarian aid — first and foremost, with food and water, yet they simply overturned these cars… through the megaphone, the Austrians announced that they agree for them to cross the border — they wanted to register them, and allow them to go further — but they didn’t understand these announcements. They understood nothing. And in all this, that was the biggest horror… among a few thousand people, nobody understood Italian, English, German, Russian or Spanish. The power of the fist was what mattered… they fought for the right to proceed further, and they had this right — but they didn’t understand this! In the coach of the French group they opened the luggage compartment — everything that was inside, in a few moments was stolen, a few of the items were strewn across the ground… in my short life, I had never had a chance to witness such scenes, and I have a feeling that this is only the beginning. On a final note I’ll add, that it’s good to help — but not at any cost.

103 thoughts on “The Power of the Fist is What Matters”