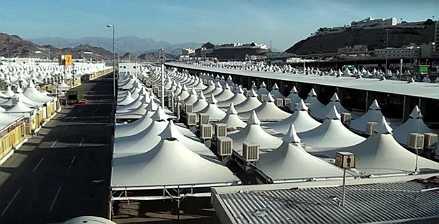 How many Syrian “refugees’ could Saudi Arabia accommodate if it decided to allow it? It already has a tent-city infrastructure that could accommodate three million.

Many thanks to Nash Montana for translating this article from the German-language edition of Epoch Times:

The wealthiest nation of the Arab states near Syria will not admit a single refugee. But what does the situation look like in terms of their capacity?

For weeks now, Europe has been in a state of emergency. This has been the biggest mass of people wandering through Europe Since World War Two. Many western governments are under pressure. There are even allegations made that they don’t do enough.

But at the same time, there are huge capacities available on the Arabian continent.

There is, for example, Mina, a valley east of the city of Mecca. The area is reserved for pilgrims on the hajj and is capable of housing three million people in huge, climatized tent camps.

This tent city was built in the 1990s on twenty square kilometers.

The tents are eight by eight meters; there are kitchens and baths. Since 1997 the tents have even been fireproof.

As the website ‘Amusing Planet’ reports, “Mina is pretty much empty for the rest of the year.” These tents are occupied only five days out of the year, during the Hajj.

Since the beginning of the civil war in Syria it has become almost impossible for Syrians to travel to Saudi Arabia and other Gulf states.

Visas and temporary residences will not be extended to Syrians in the near future either in the Arab monarchies.