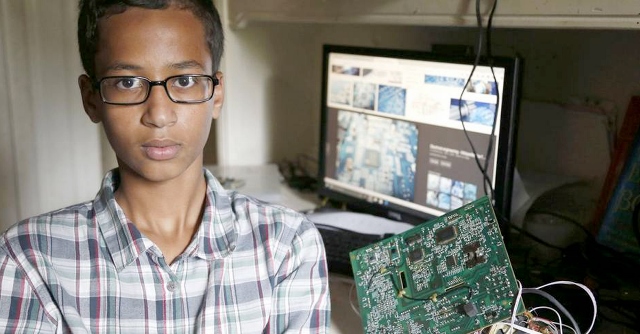 While Europe is being trampled to death, we have our minor distractions here. I hope the whole enchilada of stupidity that comprises this story makes someone smile. The story is out in a myriad of forms — the Left wants to make him one of Obama’s sons while the Right is ROTFLTAO. Just depends on your perspective…

A lot of verbiage has flowed along the Media River since this story first emerged upstream.

As it came closer to our place along the shore we began to look more closely at it. More “closely” but not more seriously. How seriously can you take any narrative kept afloat only by the assistance of the legacy media?

The planks on this craft are cut from the same balsa wood our fine jornolists use for the majority of the fragile boats designed to fit their flim-flam Narrative. After all, these things aren’t meant to last; they only have to stay afloat until the next new outrage is launched and grabs their short-sighted attention.

So the USS Muslim Boy With Bomb Science Project was built to the usual MSM’s sketchy specs. It had all the features designed to draw the attention of those who love shallow-water make-believe fairy tales.[Note: are we still allowed to say “fairy”? I can’t remember all the verboten words anymore, Besides, the list keeps changing.] Perhaps these people watch too many movies and are accustomed to the spell cast by special effects so the case bomb fell — as they say in medicine — WNL, Within Normal Limits. WNL, that is, for those the Hopey Changers who subsist on fairy dust and unicorn droppings? “Normal” if you’re a certifiable fruit loop.

Here’s the story — and the backstory — from The Daily Caller:

A bright 14-year old student brought a homemade clock into MacArthur High School in Irving, Texas to impress a teacher. But instead of earning praise for his engineering skills and innovation, he was handcuffed, hauled off by police and suspended from school.

Since he’s a dark-skinned Muslim, the political Left fell in love with this floating pos story. The MSM is big on melanin amounts (though not so much when it comes to actually hiring the darker-hued among us. They prefer love at a distance).

This scam might have worked except that reality crept in on little cat feet, fogging up their current great story. Drat!

The Daily Caller continues with an excellent fisking of this scam. I mean, they like dug up the facts on the family of this kid… made me wish I’d paid attention sooner, as in before this kid got his invite to the U.N. Whatev.

First, the author gives us a scam alert:

But what if it was all a scam? Based on a hoax? Irving’s version of Ferguson’s infamous, “hands up, don’t shoot.”

Uh-oh. Cute little Muslim boy with those studious-looking glasses. Don’t you wonder whether they’re really corrective lenses, or whether they’re not just part of his nerdy gear? He’s so angelic he could even be in the line for Obama’s Sons. How could anything go wrong?

Sometimes a ride down the Media River in your balsa-wood boat can end suddenly with a dire need for life vests for all on board. Just as the Mississippi can be for those floating down it, the Media is a treacherous channel; the inexperienced may find themselves dashed upon the rocks. In this case, those immovable objects are known in the real world as hard, cold facts.

So we leave the wreckage and go ashore to examine this cute little boy’s context. As they say in Texas (and in the South in general), who’s his daddy? Where do his kin hail from? Examining the connections, the family from which Ahmed the Prodigy springs carrying his ticking briefcase, we can see why his boat ran into treacherous shoals.

From The Daily Caller, that same story:

Well, the more we learn about Ahmed Mohamed, his clock, family and friends, and most importantly this year’s bitter struggle between Muslim community leaders and Irving government officials over Sharia Law, it seems a certainty. No offense to Ahmed, but it doesn’t take a rocket scientist to figure out.

Let’s start with the clock. It doesn’t remotely resemble one. No, it resembles a briefcase bomb.

Photos show a vintage Radio Shack clock, disassembled and put back into a case, with a wire sticking out. Once it began beeping inside a back-pack, that’s when the trouble started. When police questioned young Ahmed, they said he was “passive aggressive,” stubbornly repeating it was a clock and stonewalling other questions. But here’s the thing, even if the Pope or Dalai Lama brought that device into a school, and then played games with teachers and police, they’d get arrested too.

Hmm…it’s difficult not to digress into a metaphorical examination of this Pope and the word bombs he heaves in our general direction, but let’s stay on task here:

Unfortunately, most people’s attention span started and ended with just the clock incident. As if it happened a vacuum. Poor Ahmed.

But there’s much more to this than meets the eye.

Turns out that Ahmed’s family and friends are activists and provocateurs.

Quelle surprise! Ahmed is a front man boy after all. His real schooling was/is what he was learning early at his father’s knee. The main text is the Koran, and the rules can be found in those papers from Switzerland on the Muslim Brotherhood’s schedule for taking over. They would appear to be right on schedule for their America Take Down project. As the worm turns it reveals that Ahmed’s daddy is… drum roll, please…Mohamed Elhassan Mohamed! [Mohammed Coefficient: 200%]

Well, knock me down and call me a Texas Bluebonnet… those Islam boys are sharpshooters for sure. Just the kind of American Muslim the MSM loves to paint up as innocent bystanders, victims of xenophobic Texans.

[These Mohammeds] They’re front line warriors in battling so-called “Islamophobia,” a term coined by the Muslim Brotherhood and since used to silence any criticism of Muslims, no matter what they do. His dad, Mohamed Elhassan Mohamed has engaged in publicity stunts before, like defending the Koran in Florida Pastor Terry Jones’ mock trial in 2010. In a 2011 television debate with Robert Spencer of Jihad Watch entitled, “Does Islam Respect Human Rights?” Mohamed identifies himself as President of Al-Sufi Islamic Center in Dallas and former presidential candidate of Sudan. It’s the country where the Muslim Janjaweed militia carried out genocide against non-Muslim black Africans in Darfur.

(One small quibble with our reporter: if memory serves me right, “Islamophobia” was a term invented by the Iranians back in the 1980s when they were taking President Carter to the cleaners after the overthrow of the Shah. However the precise ancestry of the term doesn’t matter: Shi’ite or Sunni, “Islamophobia” sums up the feckless falsity of the Muslim narrative. They excel at bomb throwing and name-calling, those boys do.)

So there you go: Concerned Dad, played by Mohamed Elhassan Mohamed has been shooting off his mouth for at least five years.

The next part of the story is crucial for understanding its response to the little old clockbuilder, Ahmed. Irving Texas knows only too well the murderous environment in which Islam thrives. Irving is where Ahmed and his family live. Irving is also the town where two teenaged sisters lived until they were brutally murdered by their taxi-driving father because they were becoming “too westernized”. Dear old dad put about a dozen bullets through those girls as they cowered in the back seat of his cab.

So now we know why The Infiltrators are out to get Irving’s mayor. Remember: men named Mohammed are famous for their grudges. They make the Hatfields and McCoys look like peace on earth. That section of the story is worth reading, since you discover what an amazing mayor is doing to push back against the creeping imposition of shariah on her town. Mayor Beth Van Duyne has been a real fighter against these anti-Americans in Texas. Perhaps this whole clock made-to-look-like-a-bomb hoax was supposed to bring her down? If so, it won’t work, not until Irving becomes majority Muslim.

The Daily Mail reported earlier this year that a movie has been made about the brutal murders of the two sisters. Their father remains on the FBI’s “Most Wanted” list, but dollars to donuts that creep is long gone back to Egypt.

The author concludes we’ve been suckered again with this story:

Well, guess who’s been out to get the Mayor ever since?

If you guessed Ahmed’s family, friends and CAIR, you’d be right.

So, enter the fresh faced, nerdy kid with the NASA shirt, who tinkers with go-carts and just wants to be an engineer someday. Hollywood couldn’t have cast him better. Just three weeks into high school, he secretly carries in a device that any TSA agent at airport security would think is a bomb. Then provokes police to get arrested, leaving the cuffs on just long enough for his sister to snap a photo.

My fellow Americans, we’ve been trolled. And if we don’t get wise to it, the next Ahmed may very well blow up his school. That’s the inevitable result of silencing teachers and disarming police. Time to face truth, or forever live with the consequences.

That’s why the Baron thinks this is another example of The Flying Imams story. Remember that dry run? I sure do.

NOTA BENE: At the bottom of the story you may vote on whether or not you think this is simply more taqiyya. The poll question asks: Has America Been Trolled by Ahmed?” I answered ‘yes’, which allowed me to see the results: eighty per cent agree it’s just more Muslim moonshine.

Some of the comments are worth perusing, too. It’s a good idea to scan about half of that section just to get a feel for the general sentiment on various MSM “Scare Stories From the Narrative”. It even works on New York Times fairy tales. Facebook, the few times I’ve seen it, is far more obviously inhabited by the Left; predictable and not as accurate if you want a feel for general sentiment.