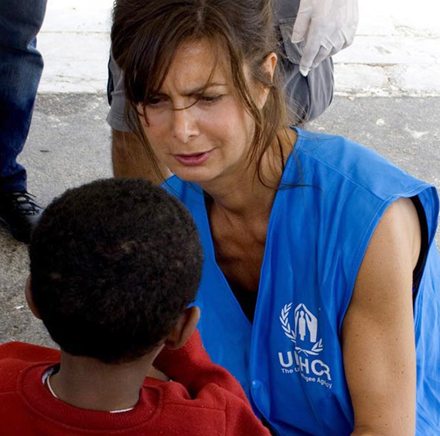 The Italian journalist Laura Boldrini was once a spokesperson for the United Nations High Commissioner for Refugees. She is now a politician, and has been President of the Italian Chamber of Deputies since March 2013. She is also an advocate for migrants, whom she celebrates as “the vanguard of our future style of life”.

More cultural enrichment for Italy and Europe! We must create a “culture of welcome”!

Like all other major Western politicians, however, Ms. Boldrini makes sure to insulate herself from any of the unfortunate side-effects of mass third-world immigration. She has now become the most thoroughly guarded holder of her office, and requires a small army of bodyguards and armored cars to protect her illustrious self.

American politicians surround themselves with armed guards while attempting to take away the right of ordinary citizens to defend themselves with firearms. European citizens long ago lost that right, but the political class can depend on armed protection at the taxpayers’ expense. Unlike her less fortunate countrymen, Laura Boldrini need never worry about being mugged by a migrant from Kosovo or raped in a public park by a Somali “asylum seeker”.

Such is the two-tiered society of Modern Multicultural Europe.

In the following video, Ms. Boldrini addresses a press conference about the joys of cultural enrichment. Many thanks to par0 for the translation, and to Vlad Tepes for the subtitling:

Below is an article from the Roman daily Il Tempo (also translated by par0) about the pampered lifestyle enjoyed by the President of the Chamber of Deputies:

Boldrini, Queen of the armored cars

The lady of the House guarded by two cars, and a third part-time
“I’m not afraid to walk alone.” She also gets protection on the Web

And to think she did not want to be escorted, the most protected politician in Italy. “I asked not to have guards. I’m not afraid to walk around Rome. I’m not afraid to go from home to office. Anything can happen at any time but this applies to anyone.” Thus spoke the House speaker, Laura Boldrini, at the time of her establishment at Montecitorio. Four months later, to accompany her every move, there is the most imposing security apparatus that the Establishment can recall: two armored cars, BMW 5 series, and a third in charge of inspections (the so-called “advances”), for a total of twelve men per day, 24 over 24 hours. And if that were not enough, the home of the third most important position in the State is monitored also by a fourth unmarked car.

But, you know, prevention is better than cure. And so, according to rumors coming from the offices of the Chamber of Deputies, the would-be presidentess had installed, in defense of her apartment, a inviolable security system, reinforced by a number of cameras positioned in strategic places, starting with the building next door, where they are renovating. The precautions are never too many.

In addition to the “gorillas” and the carousel of escort vehicles that often accompany her there is an officer or director of the Inspectorate of the House. A new entry that has not gone unnoticed in the corridors of power as well as Roman did not go unnoticed to the accountants of the House overall spending.

The system of defense of President Boldrini, is in fact, among the most expensive in recent legislatures. Apart from overtime and wages, the retinue of bodyguards costs €40 per day allowance plus expenses for restaurants (and there is no cap on the account), and hotels, also four stars. Benefits that are prohibited in all the other towns, and for policemen, even those engaged in delicate investigations and drug mafia in the underworld. For them — wanting to mention the publicity of a famous brand of rum — the worst bar in Caracas may be enough.

But there’s more. Even the predecessors of Boldrini continue to benefit from the status symbol. Pier Ferdinando Casini can count on an escort car service of five more policemen (still waiting to go to the inspection service of the Senate); Fausto Bertinotti, two men and a car; the same goes for Gianfranco Fini (as we are reminded on the opposite page about the Hyena Filippo Roma).

Yet, every so often, in glossy magazines and accompanying interviews, we see photos depicting the Boldrini walking in the street, alone, a pawn between pedestrians, apparently far away from escorts and armored cars. Error. The bodyguards follow her by sight, distancing just a little ‘but very ready to intervene, an invisible protection to the circle that does so much anti-establishment and is an excellent strategy of political communication, as in the morning, when she goes to have breakfast at the bar close to home.

In addition. Boldrini does not know it, but when she went to the funeral of a couple who committed suicide because of the economic crisis, in the Marche region, only the speed and reflexes of the security prevented the extremely noisy protest from degenerating. In the end the security that at the beginning of the legislature she had “not wanted” — was enlarged dramatically — and protected her with professionalism and brought her back to Rome safely. Now here’s a gem. On the occasion of the funeral of Civitanova, to shield her was a policeman who had been connected with the events that happened at the G8 summit in Genoa in 2001(the offense was subsequently dropped) when the young man Carlo Giuliani was killed by a policeman. Dante would call it the “contrapasso” of the President: the politician of SEL, a party that more than any other party berated the Genova police and who raised up young Carlo Giuliani as a symbol, who even had a room in Parliament named after him.

But the dangers are everywhere: on the streets and in the internet cables. Laura Boldrini is in fact the first (and only) Italian politician to demand an entire team of agents all for her, and only her, who watches the web, unleashed on the trail of those who dare to make fun with cartoons, jokes and teasing satirical. He knows something about this, that journalist of Fondi who, for sharing on FB a montage of a fake Boldrini topless photos, found himself under a special police operation with postal police in his apartment searching through his possessions. Anyway, she is consistent with herself, the lady of the House. She said that “if the web is real life, and it is, if it produces real effects and produces them, then we can no longer consider less important what is happening on the Net than what happens on the street.” Thus, in addition to the bodyguards in the flesh, she has obtained (prompting several grumbling and irritation to the House for this centralized management of men Inspectorate) also a virtual team of six experts on Internet and its dealings, day and night to defend the ‘honor and reputation’ of her office in the Chamber of Deputies.

14 thoughts on “Laura Boldrini: Queen of the Armored Cars”