The German state is implementing extraordinary new measures to silence dissent about the importation of more than a million new Third World “refugees” into Germany. Apparently the illiberal practices already in place are not having enough of a deterrent effect, so the child welfare agencies are now authorized to remove children from the custody of parents who post “hate speech” about immigrants on Facebook.

None of this is in accord with the German Constitution or the Universal Declaration of Human Rights, but who cares about that? In Modern Multicultural Germany, we don’t need no stinkin’ constitution!

Many thanks to Nash Montana for translating the following article from Zukunftskinder. 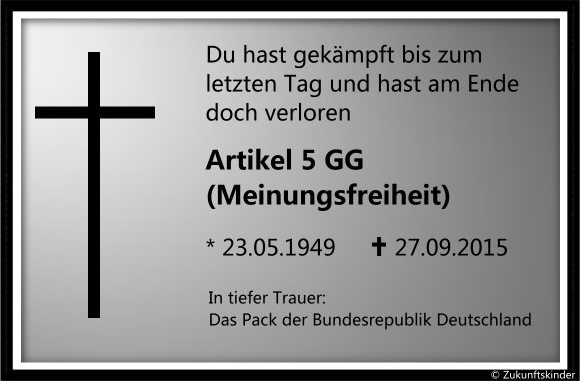 Until the last day you fought, and in the end you lost the war anyway.

RIP:
The Pack* of the Federal Republic of Germany

Freedom of Expression is so yesterday! If you post hate, your children can be taken away

If you speak the truth in today’s age, or if you point your finger at the disgraceful way the refugee crisis is handled, you’re not only facing contempt from your family and friends; no, you hazard the possibility of losing your place of work. But that isn’t good enough by a long shot. The drunk-on-tolerance Gutmenschen in this country come up with the craziest ideas to forbid a citizen his right to utter his opinion. For instance, the German Police Union (DPolG) demands you to turn in your drivers license, should you post so-called “hate comments” on Facebook. But the bounty hunters of political correctness think that doesn’t go far enough. There has to be something new and something even more harsh. And so, the self-proclaimed “hate speech investigators” have set their sights on: parents!

From a report in Die Welt:

Whoever posts xenophobic sayings and slogans on Facebook is essentially gambling with their own children. There doesn’t even have to be a concrete criminal offense for a court to judge the welfare of the child as endangered…

In that sense it is of course irrelevant whether a parent is committing a criminal offense. “The ‘Umgangsrecht’ [right access law] is for the welfare of the child, and parents have a duty, according to paragraph 1684 Absatz 2 BGB, to see to that welfare”, says the Ulm Attorney-at-law Viola Lachenmann.

If it is determined that there is an existing endangerment to the welfare of a child, the ‘Umgangsrecht’, will first be severely restricted. As in, organized chaperoned visits with the child for instance, where a child care worker will be present, and can intervene should there be a need to.

In straight talk, this means that if someone is agitating against “minorities” (refugees, foreigners, Muslims, homosexuals etc), then said person has to expect the consequence that at some point, child protective services will knock on their door, and they will remove the children from the house; or how else is that to be understood?

In the internet there are plenty of self appointed ‘detectives’ who have made it their sanctimonious duty to seek out hate comments on the internet and to hunt down the writers of said comments and eliminate them!

There is the example of David: He doesn’t like the fact that thousands of Facebook users are writing in opposition to refugees. That’s why he reports them and informs their employers. The headline in the link boasts “This Man Exposes Racists”.

Then there are Christopher and Frederik. These two are posting snapshots of Facebook user comments on the site “Perlen aus Freital”, which they deem as “hate comments”. They post the commentaries so that everybody can see who the writer was, what was said, and when the comments were written. Although they distort the images of the authors, but names are clearly visible! It is doubtful that in a judicial sense this is even lawful.

Such ways and means are abused to intimidate and discourage people who dare to open their mouths and criticize the current abhorrent asylum policies.

You really have to wonder: have these people lost their collective mind?!

Admittedly, there are some comments which really come from the bottom of the barrel and should be deleted, but do these lapses in judgment have to lead to losing your drivers license, your job, and your children? Does it have to ruin your whole life, and subsequently your family’s life? Why can it not just be reported to Facebook, and that’s it? Why is it necessary to make witch-hunting spectacles out of these incidents and inform a person’s employer and lay it all out in the public square? 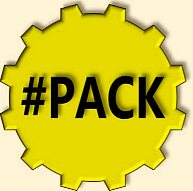 It is questionable whether these megalomaniac Gutmenschen even understand the consequences of their actions, when a person loses his job because of something like this. These things have a way of getting around, and soon the person may lose his rental home as well. Families split; that’s a fact. Alcohol, drugs, depression and violence are reasons for these splits. But when a person is already beaten down, along comes a Gutmensch and takes away the children of these parents on top of it all.

Why don’t we just directly paint crosshairs on a person’s forehead, or force them to wear a “Pack-patch”, just like when the Nazis forced Jews to wear the Judenstern, the star of David?