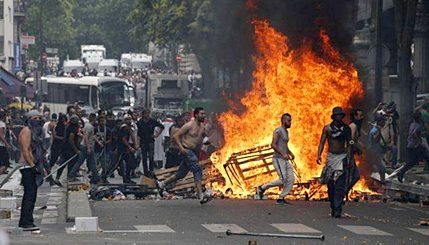 The liberal establishment in the West seems intent on national suicide. Just as they deem George Orwell’s Nineteen Eighty-Four to be a blueprint on how to run a country rather than a brutal warning about life under the Socialist jackboot, so they deem Jean Raspail’s novel The Camp of the Saints to be a blueprint on importing the third-world in their millions and bringing Western Civilisation to a close.

The majority of people in the West suffer from the “illusion of permanency” — by which I mean they think tomorrow will be no different to today and that next year will be no different to this year. They are correct that little will change in such a short time span, but the West has set into motion a series of events that will totally transform our society well before 2050, let alone by the end of this century.

A child born today, in a peaceful and cohesive part of the West, will be a mere thirty-five years of age by 2050 but he or she will live through the biggest racial/cultural upheaval ever witnessed in the history of mankind. By the time that child reaches middle age the West will have seen racial/religious civil war and terrible bloodshed. Who will emerge the winner is an unknown, but the odds are firmly stacked against the Europeans — unless there is a fundamental sea change in our altruistic attitudes.

Imagine a naïve but well intentioned liberal couple opening the doors of their house to a Muslim refugee family in a moment of sanctimonious virtue. Imagine the female householder as a progressive feminist type who has put her advertising account executive career (Tarquin darling, super news! We’ve just landed the Heinz baked bean contract!) before the apparently onerous task of providing the next generation.

The politically correct West is de-natured, de-Christianised and de-populated. The incoming non-West is nature red in tooth and claw; fanatically religious and fanatically fecund. Tomorrow belongs to them, not us, and to welcome them in in the numbers we are currently allowing is to sign the death sentence for Western Civilisation.

Some European leaders understand this. Interestingly, they tend to be from the countries once controlled by Communism and therefore not swayed by the sixty years of politically correct, subversive indoctrination meted out to the non-Communist countries with regard to feminism, racism, multiculturalism and moral and cultural relativism.

One such leader is Hungarian Prime Minister Viktor Orban, who stated: “Today mass migration is taking place around the globe that could change the face of Europe’s civilisation. If that happens, that is irreversible. There is no way back from a multicultural Europe. Neither to a Christian Europe, nor to the world of national cultures.”

Perhaps Mr Orban is aware of the words of ex-Libyan leader Muammar Gaddafi, who said: “We have 50 million Muslims in Europe. There are signs that Allah will grant Islam victory in Europe — without swords, without guns, without conquests. The fifty million Muslims of Europe will turn it into a Muslim continent within a few decades. Europe is in a predicament, and so is America. They should agree to become Islamic in the course of time, or else declare war on the Muslims.”

Gaddafi was both right and wrong about declaring war on Muslims in order for West to remain non-Islamic. Yes, we will succumb to Islam if nothing is done, but we don’t have to go to war, we simply have to halt ALL Muslim migration to the West and think seriously about clamping down on Islam within the West.

But we are not doing this. In fact we are doing the opposite, which is madness. No sane person could react thus after reading the media headlines over the last few years which describe with monotonous regularity the violence, murder, rape and mayhem carried out by Muslims in Europe, along with the wars and carnage carried out by Muslims around the world.

Why would any country with a non-suicidal ideology wish to import just one Muslim, let alone millions? The Islamic State boasts of thousands of Jihadis coming into the West masquerading as refugees, yet here we are bending over backwards to import them! The BBC et al go to great lengths to interview only those who appear non-threatening, but the stark truth is that the overwhelming majority are young males of fighting age — which the traitor class would really rather you didn’t think about too deeply.

Reports from Bulgaria suggest that young “refugee” Muslim males when forced to surrender their mobile phones are not innocents fleeing terror but Islamic terrorists who have decapitation videos and other such jihadi wonders stored on their memory cards. Will we check the phones of those coming to Britain? I rather doubt it. We must respect their human rights of course, so consequently we will allow in any number of beheaders, jihadis, murderers and rapists who will then add to the glorious multiculti paradise of suicidal Britain.

The images of little boys washed up on beaches is tragic, but equally as tragic is handing over your homeland to those with an ancient and fanatical hatred of all we hold dear. Joseph Stalin said one death is a tragedy but a million deaths is a statistic. We cannot afford to be swayed (although we are) by a tragic picture of one death if it means we will one day become part of the million deaths’ statistic.

Going back to the illusion of permanence: my grand-parents were born toward the end of the 19th century and I knew them. During my lifetime I will know people who will still be alive in the 22nd century. My grand-parents’ generation would have expected a degree of permanence regarding the people and culture of Europe, but this is no longer the case for native Europeans born between now and 2050.

The demographic changes are slow, but they are remorseless. The global population growth is driven only by the third world and we have decided to import them in order to (purportedly….) prop up our declining European populations. This means the end of Western Civilisation, of Europe, of us as a people and a culture. The future belongs to those who have children; ergo the future belongs to Islam.

It won’t happen next week or next year, but happen it will. The world my grand-parents were born into was a vastly different world to that which my grand-children will inherit. People think we could never witness the atrocities of Syria, Iraq or Libya in the rolling hills of rural Europe, but why not? Our way of life is not due to our geographical location but because Europe is made up of Europeans. When the Islamic demographic amongst young males of fighting age outnumbers our own, then we will have Syria in London, Paris, Stockholm, Berlin, Copenhagen etc. etc. etc.

If we could just see though the illusion of permanence and imagine the future photographs depicting what this will be like for non-Muslim Europeans then perhaps we could avert our eyes from photographs of Muslim toddlers washed ashore on Turkish beaches in 2015. The world is changing, and if we wish to survive as a people and a culture we must defend our homelands against the migrant invasion. Yes, this sounds harsh, but if we do not we must then accept that our virtue today can only lead to unimaginable carnage tomorrow.

If you are moved by harrowing images of drowned toddlers (and who isn’t) do please try to imagine what sort of life you are guaranteeing for YOUR children and grand-children if you allow your emotions to cloud the inevitable consequences of your present-day altruism. How we currently think and how we currently behave will seal either our future destruction or our future survival. If you decide for destruction simply because it won’t happen next week or next year then you are betraying your country and your children. It really is as simple as that.

On a final point: there will be any number of half-witted and sanctimonious liberals who will be horrified by my apparent cold-hearted callousness. As ever, if you would like to invite me onto the BBC or equivalent to discuss this then I would be more than happy to do so. But as ever, you won’t, because you know you cannot logically, morally or ethically argue against me.