Our Israeli correspondent MC returns to the topic of feudalism in the 21st-century West, reborn in a new guise. 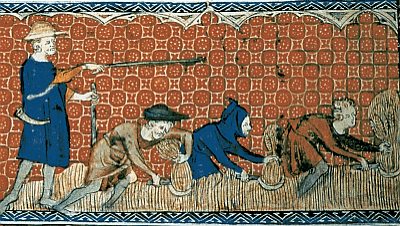 A while ago I wrote an article on the new feudalism that we see becoming the normalcy of current life, and I have seen no reason since to believe that its progress is not relentless. At the diktat of the TV we still vote for the archons of our slavery instead of those who proclaim our freedom.

We can say we are not slaves because we get paid for our labours, but in whose currency do we get paid? and who controls its value, and, what is our personal indebtedness?

Slaves are always paid in some form, or else they die of starvation, but the means by which their provender is provided is not part of the definition of slavery. If the master (or employer) decides the remunerative value of the employment in disproportion to real commercial value, is this too not slavery? Slavery is in actuality a matter of control, and those who are in debt are ‘owned’ by their lender(s) who can employ various financial and physical tools against offenders. When applying for a job nowadays, in many cases one must provide a credit check to one’s potential employer.

Yet another nail in our coffin of personal slavery is now falling into place: the arrival of an army of disconnected young men who will be only too happy to enforce slavery if it gives them the opportunity to rape and loot unprotected victims, not to mention getting paid for it too.

The Islamic male is a natural bully. He has grown up in an environment where he can bully with impunity; his mother, his sisters and anyone in the household weaker than himself are his victims. Conversely, he too is the target of anybody stronger than himself, so his life is maelstrom of conflict with viciousness bringing rewards, and weakness bringing deadly peril. He therefore sees the world through the eyes of a psychopath for whom might (and the subsequent potential for physical violence) is not only his ordained right, but is also essential to his survival.

For a young boy, being raped is unimaginably painful and damaging both physically and emotionally, and this is the gauntlet of the Islamic male after he is forced to leave the protection of the women’s rooms at the age of six or so. Not all boys get raped, but it is not uncommon, and the victim is left bleeding physically and emotionally, a trauma recalled at every relentless call of nature. In his turn he inflicts the same torment on those who come after, and on any female who becomes vulnerable or exploitable.

Thus when the Muslim migrant looks west he sees through the spectacles of revenge, his personal vendetta against a cruel world. He sees an unprotected society, prime for rapine and looting, the streets paved with gold and the pillows with conquest and retaliation.

As Westerners, we make a fatal mistake when we assume that Muslim males are the products of a society the same as ours, and that the damage to the Muslim psyche can be collectively repaired by ‘resettlement’ in a Judeo-Christian society. Our forefathers would not have made the same mistakes, because they better understood the superior nature of a bible-based society.

In a cultural Marxist society (remember, both Marx and Gramsci grew up in Torah-based societies) where all cultures are deemed equal, one must assume that the normalcy of the culture produces an unspoilt product. In the case of Islam, this assumption is simply not valid. Islam produces monsters, in a way, and with a frequency unimaginable to the Western Torah-based psyche. To a Muslim, normalcy is mutilation and disrespect for bodily integrity, even to the extent of life itself, and especially those bodies and lives of other people.

Marxism, in its obsessive desire to debunk and replace Christianity at all costs, has failed to heed that its own foundations and assumptions are most firmly based in Judeo-Christian society, and that it is thus sawing off the very branch of the tree upon which it sits. Hence the unending saga of unintended consequences, mayhem and murder that follow naturally in the communist wake.

Torah preaches a Gospel of free will and personal responsibility. I alone will have to stand before Yahovah and account for my actions in the light of His law. Thus my behaviour matters, and I will be called to account. The basis of that account will be Torah, and especially the Ten Commandments. There is no such equivalent in either Islam or Communism. Communism, however, tends to be practised by people brought up in a Torah-based culture, and is thus not unaffected by it.

Islam is different. Muslims are born already condemned, and have to win salvation through submission. This is in itself an oxymoron, to win and to submit are incompatible in meaning in this context. Consequently, real belief in Islam encounter a dilemma for which the only satisfactory way out is to take the Jihad route. This is the process that we call radicalization, and it is the inexorable result of an increasing belief in Islam. Luckily very few Muslims actually believe to the extent that these issues become problematic for them.

A feudal system, like communism, requires a force of thugs, red guards or brown shirts, to act as enforcers and terrorists, so we see further pieces dropping into place.

It is these same Muslim Recruits who will enforce my slavery or, more likely, my death, and we are watching the process as I write. These are not refugees, they are not even migrants, they are recruits, recruits to a modern Sturmabteilung, and the whole process stinks of the contrivance of our ‘trusted’ leaders.

But we just cannot believe that it is all really happening. We are like a young child trying to waken a parent who has died in his sleep. The world has changed. All we can do is to try to limit the damage.