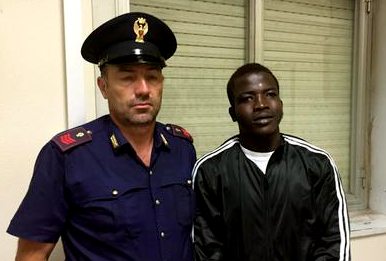 On August 30 an elderly married couple in Sicily were brutally murdered during a burglary and home invasion. A “youth” from Ivory Coast was eventually arrested as the primary suspect. As the investigation proceeded and more details emerged, it became clear that this crime was a particularly heinous one.

Here’s an early report from ANSA on the incident:

Victim’s daughter accuses the state of being responsible

(ANSA) — Catania, August 31 — A police forensic team searched for evidence overnight on Sunday after husband and wife, Vittorio Solano, 68 and Mercedez Ibaniz, 70, were discovered dead in their home in Palagonia near Catania. Police arrested an 18-year-old Ivorian man, Mamadou Kamara, who was found with blood-stained trousers as well as a mobile phone and clothes belonging to Solano in the Cara di Mineo migrant reception centre in June.

A police car went round to the couple’s home to investigate the burglary but discovered the killings instead.

Ibaniz’ body was found in the courtyard, while Solano was discovered inside, his body presenting clear signs of a likely scuffle.

“It is also the state’s fault if my parents were killed. They let these migrants come here and they do what they want, including burgling and killing” said the couple’s daughter Rosita Solano.

Investigators believe Mamadou may have had an accomplice.

But it got worse — an autopsy determined that the 70-year-old woman had been raped before she was murdered:

Mercedes Ibanez,70, killed along with husband near Sicilian city

(ANSA) — Palagonia, September 1 — Mercedes Ibanez, who was found dead at home with her husband at the weekend, may have been raped before being killed, a judicial source said on Tuesday following preliminary results of an autopsy performed overnight.

The source said the autopsy revealed “just clues, although they are various, that don’t give certainties”.

Final autopsy results will be filed with the prosecutor’s office within 60 days.

Ibanez, 70, and her husband, Vincenzo Solano, 68, were discovered dead in their home in Palagonia near Catania on Sunday.

Police arrested an 18-year-old Ivorian man, Mamadou Kamara, in connection with the killings.

The following news report from Italian television was broadcast shortly after the arrest of the suspect. Many thanks to par0 for the translation, and to Vlad Tepes for the subtitling:

Below are excerpts from four later ANSA reports. From September 1:

Woman ‘may have been raped’

(ANSA) — Caltagirone, September 1 — A judge will rule in a hearing on Wednesday whether to confirm the Sunday arrest of Mamadou Kamara, an 18-year-old Ivorian man accused of killing a couple in Palagonia at the weekend, the Caltagirone prosecutor’s office said Tuesday.

At Wednesday’s hearing, chief prosecutor Vincenzo Verzera will ask the judge to order Kamara to be held in pre-trial custody in prison.

Autopsies on the bodies of both victims, Vincenzo Solano, 68, and his wife Mercedes Ibanez, 70, were completed during the night Tuesday, with an initial report to be filed with the prosecutor’s office by the end of Wednesday.

A judicial source said Ibanez may have been raped before being killed.

According to an initial report, the murder weapons may have been a screwdriver and a large pair of pliers. A judge on Tuesday signed an order allowing the bodies to be returned to the victims’ families for funeral ceremonies, which are scheduled to take place on Wednesday at 5 p.m.

Police arrested Kamara Sunday after he was found with blood-stained trousers as well as a mobile phone and clothes belonging to Solano in the Cara di Mineo migrant reception centre, where he had been living since June.

The couples’ daughter, Rosita Solano, on Monday blamed the government as “also” responsible for the killings.

On Tuesday, Solano challenged Premier Matteo Renzi to “show his face” in Palagonia.

“The death of my parents evidently doesn’t even merit a tweet from Premier Renzi or Minister Alfano,” Solano said.

“I want justice, not political controversy. Renzi, come talk to me, show your face, before the funeral,” she said.

Renzi says the guilty, even if immigrant, must pay

(ANSA)- Rome, September 2 — Mourners in Sicily continued Wednesday to pay their last respects to a married couple murdered during an attempted burglary of their home on August 30. An 18-year-old Ivorian immigrant and resident of a shelter for asylum seekers is under investigation for the double murder.

“Facing hardline issues of responsibility and seriousness, he who makes a mistake must pay fully, up to the last day,” Italian Premier Matteo Renzi told the radio station RTL 102.5 on Wednesday, making reference to crimes implicating immigrants that recently have made headlines in Italy.

Renzi also warned that the threat of “terrorism should not be underestimated” regarding illegal immigrants flocking to Europe.

Investigators say Vincenzo Solano, 68, and Mercedes Ibanez, 70, were killed in their house in Palagonia, a town in southeastern Sicily, when an intruder attempted to rob them. The wake has been organised in the town hall and a prayer vigil held in the local parishes. The funeral will be held at 5:00pm and presided over by the bishop of the town of Caltagirone, Monsignor Calogero Peri.

Ivorian Accused of Killing Sicily Couple to Stay in Jail

(ANSA) — Catania, September 3 — An 18-year-old Ivorian man accused of killing a couple in Palagonia in Sicily at the weekend must remain in prison ahead of trial, a judge ruled on Thursday.

Mamadou Kamara is accused of killing Vincenzo Solano, 68, and his wife Mercedes Ibanez, 70, while attempting to rob their villa on August 30.

The judge in Caltagirone accepted the local prosecutor’s request for Kamara to be held in pre-trial custody in prison.

(updates previous). (ANSA) — Caltagirone, September 4 — Prosecutors formally accused Mamadou Kamara, an 18-year-old Ivorian arrested Sunday in connection with the killing of a couple in their home in Palagonia near Catania, of having raped the woman victim, Mercedes Ibanez, 70.

Hat tip for the articles: Insubria.

25 thoughts on “Culturally Enriched Rape and Murder in Catania”