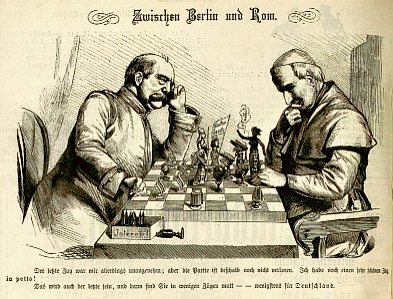 The following video shows German Chancellor Angela Merkel responding to citizens during a Q&A session. Nash Montana, who translated the clip, has this to say about it:

“Angela Merkel Tells the Truth About Islamization Through Refugees and Islam”

This is the title of the video, suggesting that Merkel really stuck it to the person asking her the question about what Merkel is going to do to keep German culture safe and protect it. The title more aptly should be ‘Merkel accuses Germans of not being good Christians and it’s their fault that the country is being Islamized.’ I find her whole speech infuriating.”

I’m disgusted by it, too, for that and other reasons. The Chancellor’s cynicism and — dare I say it? — chutzpah are astonishing, given the relationship between the German state and the Church over the past century and a half.

When Otto von Bismarck became chancellor of the new German Empire in 1871, his policy remit now extended to numerous formerly independent German states. Some of those states, for example Bavaria, were largely Catholic. Bismarck considered the Catholic Church and the Vatican to be a rival source of power, and rightly so. As a result, throughout the 1870s the German government under the leadership of Chancellor Bismarck waged a Kulturkampf, or culture struggle, against the Catholic Church. The goal was to reduce the influence of Rome, marginalize the Church, and weaken the Christian religion.

The effort to cleanse the German state of Christianity did not end with the accession of Kaiser Wilhelm II and the retirement of Bismarck in 1890. The process continued and intensified between 1933 and 1945 under Chancellor Adolf Hitler, who detested Christianity and hoped eventually to eradicate it from public life.

During the rebuilding of Europe after the war, Germany, like other European countries, followed the progressive “social democrat” model, which insisted that religion be relegated to the sidelines. People who held sincere religious beliefs —in those halcyon days almost entirely Christians — were ridiculed for their atavistic superstitions. Political parties such as the Christian Democrats (Chancellor Merkel’s party) became Christian in name only. For the past sixty years or so, Christianity in the public sphere has been at best vestigial.

We Americans have a relevant saying that applies to Angela Merkel’s cynical complaint about her fellow citizens’ ignorance of Christianity: “Butter wouldn’t melt in her mouth.”

Frau Merkel: Your compatriots are ignorant about Christianity because you and your predecessors deliberately fostered and enforced such ignorance.

That woman has a nerve!

51 thoughts on “Angela Merkel Lectures Germans About Being Good Christians”