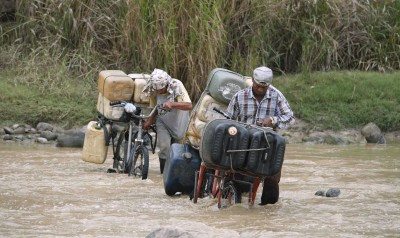 Our Colombian correspondent Diego sends this account of a refugee crisis brewing half a world away from Europe, on the border between Venezuela and Colombia:

The last 48 hours have been outrageous. My best friend and I have to watch Europe soak herself with gasoline before smoking… and we all know where that leads.

The target of my wrath today is not really Europe, or at least Europe is not the only one. As you might guess, the target is President Juan Manuel Santos.

Maybe you have heard about this: for the last two weeks President Nicolas Maduro’s regime has been expelling Colombians from Venezuela. Most of them arrived in Venezuela under Hugo Chavez and had been invited in by the PSUV regime so they could vote for said party. Many others, however, have lived there for twenty or even fifty years.

That, however is not the problem. The problem is the way the Santos Government treats them. So far most of them are crowding makeshift refugee camps in Cucuta and the two Santander departments (Santander and North Santander) Santos has, as always, promised swift government action to help them and to stand up for their rights…

If you thought he did not do it, then you guessed right.

Add to this the news of the German government’s provision of €140 for food on top of all the other expenses already paid, and you get the source of my anger.

9 thoughts on “A Refugee Crisis in the Western Hemisphere”