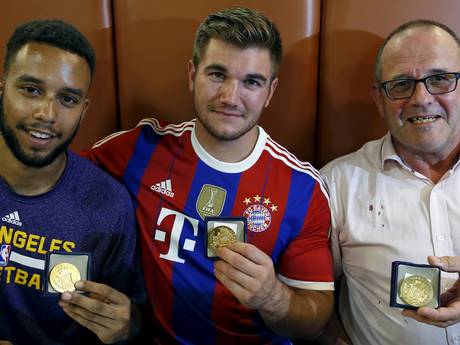 The following article (as translated by doxRaven) appeared today in a mainstream German newspaper. The translator includes this brief note:

I think the article is quite extraordinary in what it raises in the last paragraph. Europe may, just may, be slowly waking up — though regrettably a lot more blood will have to flow before they are fully awake.

Why It Was Americans

Three Americans risked their lives to prevent a bloodbath in a European Thalys train. Was that a coincidence — or are Americans better prepared for Islamist terrorism?

Europe is alarmed — once again. After the foiled attack by the Islamist Ayoub El Khazzani on a high-speed Thalys train, the security levels in parts of Western Europe have been elevated. A typical reflex reaction. French security is running patrols, and Belgium and Netherlands are contemplating letting their police patrol platforms and trains with automatic weapons. This or that traveller may gain a sense of security from that; however, this will not prevent attacks.

Radical Islamists, who are only too eager to follow the calls on the Internet by the Islamic State to massacre as many non-believers as possible, are already within Europe. Some are even battled-hardened returnees from the Syrian civil war. However, the history of Islamist attacks shows that only in exceptional cases do subsequent attacks follow the same pattern.

Terror attacks by the soldiers of Allah are difficult to predict, and they may occur anywhere in the world at any time. To realise this requires no further examples after the cascade of terror seen his year, the Charlie Hebdo massacre just being one of them. The French security service alone is tracking 5,000 individuals. Too many to monitor around the clock. The lesson is a different one.

While the train personnel apparently bolted, barricading themselves in a train carriage and leaving the travellers to fend for themselves, three young Americans took the initiative. Alek Skarlatos, Spence Stone and Anthony Sadler, risking their lives, wrestled the man — who would have tuned the Thalys into a tube of death — to the ground. That two of them were soldiers, one of them having recently returned from a tour of duty in Afghanistan, is no coincidence. The willingness to sacrifice their lives for others essentially comes with the job, even when this aspect of being a soldier is all too readily put aside in this part of the world. Would German paratroopers or French foreign legionnaires would have acted in the same manner had they been in the train compartment? Probably yes. However, one can’t count on a solider being nearby every time an Islamist decides to commit an attack.

In the event of a terror attack, the individual cannot rely on state authority; he has to take his destiny into his own hands, and do whatever is within his capabilities. In the Unites States people have a belief in their own defence. This can lead to its own problems; however, that belief saved hundreds of lives in our backyard. This should make us think.

33 thoughts on “Why It Was Americans”