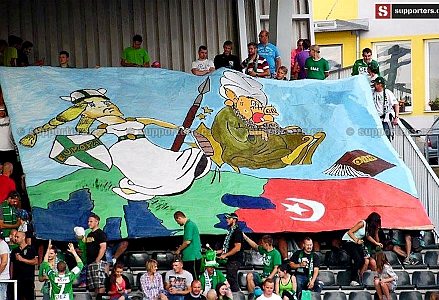 According to the latest reports, some soccer fans in the Czech Republic are not only showing signs of Islamophobia, they may even be WAYCISTS.

Here’s the report from T-Online. Many thanks to JLH for the translation:

Investigation of Czechs for Anti-Islam Placard

Jablonec, Czech Republic: Czech police are investigating soccer fans who held up an Islam-hostile banner during an opening game of the soccer league.

As Czech Broadcasting reported, the original charge is hate speech. The banner depicted Europe as a valkyrie booting a pig with a turban and a Koran. This was seen on Sunday, before the fans of F K Jablonec, during the game against Bohemians Prag 1905. The police are waiting for the opinion of experts on extremism. Posters had already appeared in soccer stadiums with the motto “We do not want Islam in Czechia.”

The image in the banner will be familiar to a lot of European readers. A smaller version is featured on the sidebar at Politically Incorrect, among other places.

4 thoughts on ““We Do Not Want Islam in Czechia””