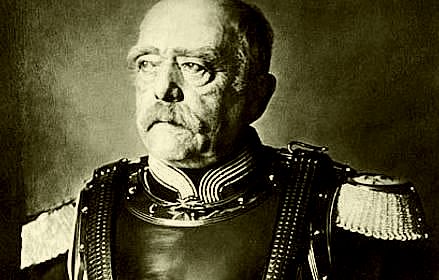 Suppose I were to write the following words as part of an essay:

As Chancellor of the German Empire, Otto von Bismarck was the architect of the first instance of modern state socialism in Europe. He introduced state health insurance and old-age pensions into Imperial Germany, in part to take the wind out of the sails of revolutionary socialists (for example, Karl Marx) who were gaining more and more traction fulminating against traditional political structures and in favor of a World Socialist Revolution.

To consolidate imperial state control, Bismarck also fired the first salvo in what eventually became known as the Culture Wars, instituting a Kulturkampf in the Catholic regions of the new empire to reduce the power of the Pope and the Catholic Church.

If my essay were a serious historical endeavor — rather than a few sentences composed off the top of my head to serve as an example — I would cite sources, including references to books written by respected historians of 19th-century Germany.

If I managed to pique your interest in the topic, you might visit your local library and borrow those books to read up on the topic in greater detail. They would of course provide copious footnotes or endnotes, plus a substantial bibliographies of additional scholarship. Their references would likely include memoirs, diaries, personal correspondence, official documents from state archives, and other primary sources, some of them on microfilm or microfiche. If you were a historian, you might track down the documents, opening dusty boxes in the basement archives of venerable public institutions to peruse the yellowed and brittle originals.

Such is the practice of the craft of history. Or it used to be. Up until about 1995 it was considered the norm, and those who aspired to the title of Historian would follow similar procedures. Then came that pesky thing called the “Internet”, and over the next twenty years or so the study of history became a free-for-all.

We have a tendency nowadays to believe that anything that appears often enough online must be the truth, forgetting the once-respected connection between what is asserted in writing as “fact” and multiple physical sources that corroborate that fact. Yes, hoaxes were possible in the old days — remember the Piltdown Man? — but they were more difficult to construct, and therefore less common, than they are in the Digital Age.

I mention all this because of the earlier discussion about Carly Fiorina and the speech given by her that described the glorious history of Islam.

Investigating Ms. Fiorina’s speech, and establishing the “facticity” of what she allegedly said, is rendered much more difficult by the amorphous informational blob called the Internet. I tracked down the text of the speech to the Hewlett-Packard website, and that’s definitely a more reliable source than Hizb ut-Tahrir. But it still not verifiably true — a contemporary report by a witness, a photocopy of her notes, or an official video of the speech would help nail it down further as historical fact.

So it’s a tough job, establishing historical fact during the Ascendancy of the Internet. But we should attempt it nonetheless.

The pursuit of historical rigor seems to be a dying art, no matter one’s position on the political spectrum. If a certain blob of text appears over and over again on the Internet in enough places, it is widely considered to be true.

Or, to put it another way: Trust, but verify.

13 thoughts on “The Craft of History, or What Passes for it Nowadays”