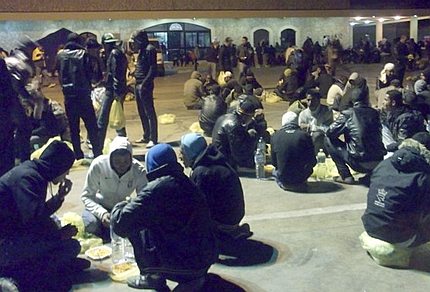 Saxony and Germany have open borders within the EU, and the EU is now committed to accommodating every single illegal immigrant who manages to cross the Mediterranean to Italy or Greece. Despite the wishes of the general public (as expressed by PEGIDA and other anti-immigration groups), the German government has committed to take in the country’s allotted share of migrants.

JLH, who translated the following article about what is happening in Saxony, includes this note:

On the heels of the article that revealed there is still a lot of strength in Dresden’s PEGIDA, and the continued pretense by the mass media that it has sunk out of sight, here is an ominous little article that confirms the movement’s worst fears about the situation and the politicians who control it.

“A profound humanitarian duty to meet people without prejudice and treat them accordingly” — In an exclusive interview, Saxony’s governor, Stanislaw Tillich, explains how his administration’s plans are to be carried out.

Dresden: Governor Stanislaw Tillich (CDU) is preparing the Saxon Free State for the dramatically increasing number of refugees. As early as this August, Saxony will have to expect more than 5,000 new asylum seekers, the chief executive told the Sächsische Zeitung. He was referring to calculations of the Saxony regional office. That would mean approximately 200 refugees arriving per day. The federal agency for immigration has promised a new prognosis in the next days.

Tillich said: “We will have to expect consistently high numbers of refugees in the next months.” Therefore, the state intends to expand the capacity for initial reception of refugees. By the cabinet meeting on August 25th, there is expected to be a plan which will also contain sites for accommodations. The governor is not yet giving numbers or possible locations. At any rate, the refugees are expected to be primarily accommodated in Saxony’s three major cities.* Beginning in the autumn, all the refugee tents in Saxony are to be replaced by permanent accommodations, said Tillich. “Tent camps are and will be only an emergency solution.”

Tillich advocated for an orderly intake of the refugees. It is, he said, “a profound humanitarian duty to meet people without prejudice and treat them accordingly.” He was reserved in his comments on the demands of the police union and the Saxon CDU contingent to reinstate German border controls. The first order of business, he said, is to secure the borders of the EU. Should that not succeed, then a debate on other measures would be appropriate.

7 thoughts on “Take That, PEGIDA!”