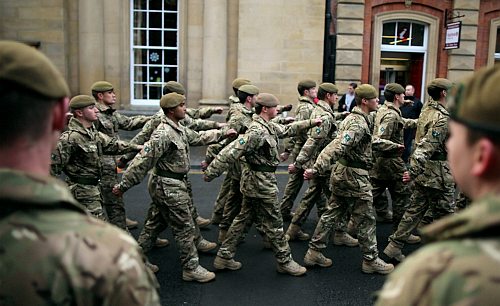 If you made a syllogism of this story from The Daily Mirror, my headline is accurate.

A computer-printed threat was shoved through the mail slot of a military family’s home in Lincolnshire. Its contents so scared the family who received it that they’ve fled their home.

An image of the letter is at the Mirror’s page, but here is the text:

The Holy War For Islam

A warning to the brides of British Soldier
Warmongers

Our peoples have suffered at the hands of your husband
who have murdered, killed and raped our women and
children

We the servants of Allah intend to avenge our peoples
by destroying the families of unbelievers in the land of hate.

You along with many others will pay the prices
for your husband’s destruction in the Holy Land.

We now know where you live and will begin to destroy the
unbelievers and their families as they have done to us.

So what did the police do? They said this was an isolated incident, and then they warned military families to keep their yaps shut on social media. Just as they warned Tommy Robinson not to retweet what was being said/threatened by those thugs. The Anglosphere has morphed into a bunch of peace-for-our-time appeasers.

A reasonable person is bound to ask if the police have made some Faustian bargain with the terrorists: we’ll keep them cowed and in return you leave us alone. Or summat like that.

We Americans are no better off, sadly. The naval officer who wisely took his sidearm to work at the recruiting office is being charged for doing so.

16 thoughts on “Police Collude with Terrorists”