Our Dutch correspondent H. Numan is also our Bangkok correspondent, since that is where he lives. Below is his personal account of what happened on August 17 near the Erawan Shrine in central Bangkok. 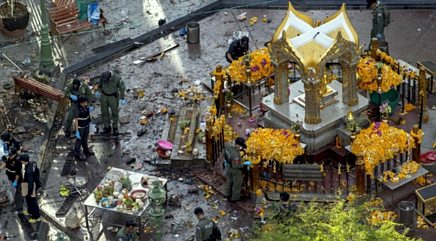 My musings about the Bangkok bomb blast
by H. Numan

Monday evening I got an anxious phone call from my partner: ‘Everything okay?’ Yeah, I am. Why the sudden interest? ‘There has been an explosion at World Trade Plaza. Seven people are dead.’ Oops. That’s right round the corner of where we live. I didn’t hear a thing… His call was the first telling me something very bad happened almost on our doorstep. It proved to be much, much worse. Not the first time, mind you. We had a small explosion opposite World Trade Plaza in 2006. Later we had a three-month siege in 2010.

This time it’s very different. The 2006 bomb didn’t do much damage. When the army moved in to clear the siege in 2010, there was massive damage with serious loss of life. The red shirts intentionally torched many shops; Big C Ratchadamri, parts of World Trade Plaza and many other shops were completely destroyed. They fiercely resisted, and the army was happy to oblige them. It took more than a full year to rebuild those torched buildings.

What actually happened now: at about 19.00 hrs an explosive device went off in the Erawan shrine, killing 25 people and injuring 125. Two bombs were found nearby and deactivated. The next day someone threw a small explosive device from the Thaksin Bridge. This exploded in the water; nobody was injured. In both cases the perpetrators got away. 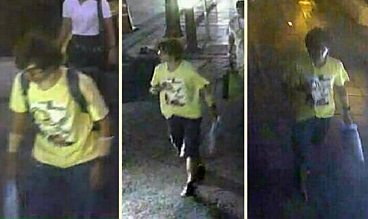 There is some video footage of a suspect of the Erawan blast, but not very clear. This seems to be a person 20-30 years old, with thick black curly hair wearing heavy framed glasses (“geek glasses”). He doesn’t seem Asian to me, and he might very well be wearing a wig and fake glasses. The police sketch released makes him appear much more Asian, though. 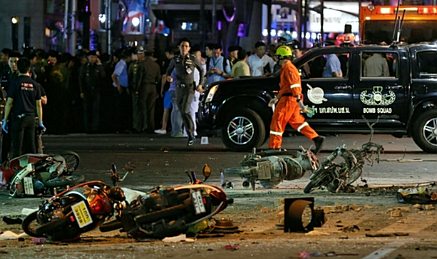 Nobody has so far claimed responsibility for the attack. That’s all we know. Everything else, including my observations, are pure 100% speculation. So do keep that in mind.

The Erawan shrine is a very important religious temple in Thailand. Not the most important; that is Wat Phra Kaeaw. It’s a Hindu rather than a Buddhist shrine, dedicated to Brahma. Next door is the Erawan Hilton hotel. During construction of the hotel lots of workers ‘mysteriously’ died, and it was established by experts (we have those aplenty) that the gods weren’t happy. A shrine dedicated to Brahma had to be erected, and was. Proper safety measures would have done the trick a lot better, but that’s more expensive.

This shrine became world-famous after some worshipers had their wishes granted. One famous incident was a wish granted to a rich and beautiful Thai lady. Her vow was to dance naked to honor Brahma. Of course, when the word got out, the press was present in numbers to take pictures. Nobody showed up. So the press and onlookers left. Seconds before closing time (20.00 hrs), a limousine parked right in front of the entrance. The lady got out in a bathrobe, and made her dance as quick as she could. Got in the limo again, and disappeared. She wasn’t only rich and beautiful, but also clever. And luckily camera phones hadn’t been invented yet.

Sometimes Brahma grants you your wish. The rule is that you can make any wish you want, but you must deliver whatever you promised to do in return. No matter what.

Today it’s a kind of Lourdes. Lots and lots of mainly Asian tourist visit the shrine to pray, and lots of Westerners want to see it as well. The name Erawan comes from the name of the thirty-three-headed elephant Brahma rides on. That many heads are a bit difficult to make, so usually Erawan is shown with three heads. The offerings are often monetary, and donated to charity. Hospitals nationwide get grants from this foundation. Offerings are often in kind, too. Usually wooden elephants in various sizes, some covered with gold leaf. Part of the monetary offerings is to pay for girls in traditional outfits dancing to honor Brahma. They sit in waiting under a roof. Once a worshiper has paid for his offering they perform ritual dances accompanied by traditional music. The number of dances varies, depending on the size of the offering. 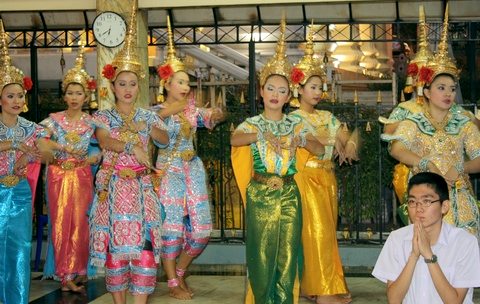 A mentally disturbed man damaged in 2006 the statue of Brahma, and was lynched by taxi drivers on the spot. This happened in the very early morning. The lynch team was arrested, and immediately bailed out of jail by a senator who heartily approved of their swift action. I don’t know what happened with them afterwards. Thai justice is usually very harsh, but this might be a case where leniency was applied. Nationwide, people applauded the action of the taxi drivers. Thais are very easygoing people, but please do not touch their sensitive spots. They take both their country and religion very seriously.

Now you know that this bomb attack is much more than ‘just another bomb’. First of all, it attacked a very important religious place of worship. Second, it is a major tourist attraction. And finally, this seriously damaged tourism as well as business. The Thai stock exchange dropped the next morning, but it is recovering now.

The prime minister suspects this to be an attack by Red Shirts. The minister of defense thinks Uighurs may be behind it. Both don’t see any links to international or local (Muslim) terrorism. I respectfully disagree with both of them. Supposing the minister of defense is correct, this most certainly is international terrorism. Supposing the prime minister is correct, the Red Shirts would be finished as a political force. Nobody would want to be associated with such a vile group. (That would be akin to the Tea Party blowing up Mount Rushmore.) It simply makes no sense at all. Even a child could see tourism and the economy were going to be hurt. Yes, the Red and Yellow shirts don’t like each other very much, but both are Thai. And proud about it! They would never intentionally blow up any religious shrine or willfully try destroy the national economy.

That rules out, in my opinion, a local political attack. It might also be ‘an alternative business settlement’, as the 2006 explosion was. It’s a lot cheaper, quicker and far more effective to pay Bt. 50,000 to permanently shut up a competitor than spend millions in legal proceedings over many years. Something a few not-so-scrupulous businessmen prefer. However, no businessman, scrupulous or otherwise, would want to be associated with 25 deaths at a nationally very important shrine. That rules out a business dispute.

I see two possibilities: first of all, the Muslim troubles in the deep south of Thailand. This has been going on for over a decade. The Muslim insurgents don’t state a clear goal; they simply harass (Buddhist) Thais wherever they can. After successful attacks they never claim responsibility. So far, the only exceptions are in the deep south itself, in the provinces of Yala, Naratiwat and Pattani.

There is a very strong military presence there, schoolteachers get severance pay from the government and if they want, a free Colt .45 or military protection. It is that dangerous there. You don’t hear much about it in the news, and neither do we here. Nevertheless, at least 6,500 people have died during the past decade. That’s an average of almost two persons a day, every day, for ten years, non-stop.

That they didn’t use their normal explosives or tactics in these two attacks doesn’t automatically exempt them. I see them, once again in my personal opinion, as the prime suspects. First of all, nobody claimed responsibility. That’s a southern insurgent signature. Second, they struck in the very heart of religion. Third, they hurt the economy badly. Both are clear Muslim terrorist indications. Given the choice of blowing up the Vatican or the French parliament, they would probably decide which by flipping a coin.

It might be revenge for the Uighur extradition. I disagreed with the minister of defense above, but that is purely semantics. Uighurs don’t live in Thailand. If they bombed the Erawan shrine, it would automatically be an act of international terrorism. They certainly are capable of doing it. What speaks against them doing it is that they have rarely, if ever, attacked outside of China. Certainly not on a scale like this.

What we can rule out for now is ISIS or Al Qaeda. Both of them would have claimed the attack within minutes. They haven’t so far. Even if they were indirectly involved by supplying explosive or advice, they would have made it known to the world. 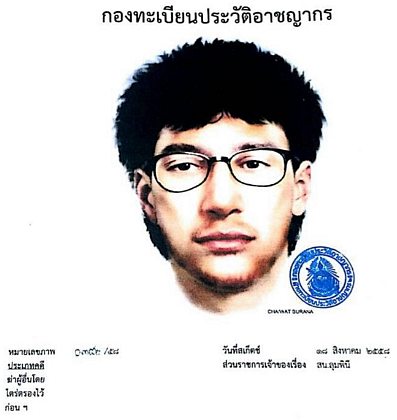 The search continues while I’m writing this article. The government has just officially asked for Interpol support. Police are now looking for at least ten suspects and assume a lot of planning was involved with bomb makers, scouts and lookouts. They also agree with me (I feel honored!): the prime suspect was wearing a wig and false glasses.

26 thoughts on “My Musings About the Bangkok Bomb Blast”