Our Columbian correspondent Diego returns with an essay on the current situation of his country and the rest of Latin America.

First of all, I must say that the “system” — if we can describe the mess that the Left creates as such — managed to silence me for quite a while…

However, I am here to speak of two things: First, how the stupidity of my own government might force me to become that which I despise, and secondly about the issue of Latin America as part of the Western cultural continuum, but not of the same economic continuum.

So, first things first: my beloved homeland is passing through dire times. Although we don’t have to worry (yet) about the Mohameddan Horde invading this corner of the world, our freedoms are under an unrelenting attack from a President who would gladly sell his country and people for a Nobel Peace Prize. For example, the General Procurator — an ultra-conservative (you in Europe and the USA could use someone like him, even if I disagree with some of his ideas) — was for years a voice that created a balance and kept both the leftists and the government in check. However, his position is now in jeopardy.

Our current government is a problem that to this region is an out-of-context one. While politics were locked in a Cold War-era struggle, this post-Soviet fool, President Juan Manuel Santos Calderón, had to arrive, to put Colombia in line politically with the PC regimes of Europe and the USA, as a way for them to make inroads in this region. 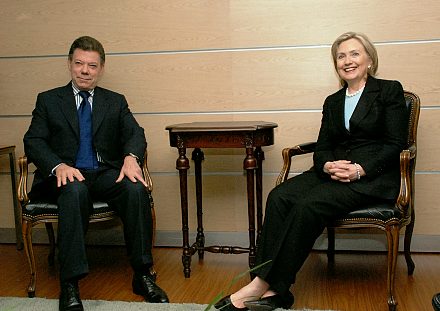 Admittedly, the old Soviet-style left still has a chance to gain power, thanks to the negotiations in Havana with FARC… Which would be an even worse fate than the PC regime Mr. Santos wants to implement here. If such a thing happened, I might be forced to do one thing I would hate to do: leave.

I would most likely move to Canada. Technically, due to events in my family, I could ask for political asylum there, but I’d hate to do so. Emotional reasons aside, my Arab-looking appearance would make me a target during the first phases of the Collapse, and my ideas would make me the target of either violent leftists or jihadis… While I’d have no choice (my survival chances in a Venezuela-like situation are zero), I would become the thing I despise, a foreign immigrant living off government pity…

Now, on to a less egotistical topic…

Latin America is truly the most blessed and cursed land this world can offer. We have it all in resources, but our own stupidity stops us from reaching greatness.

We are indeed really dumb. We refuse to see that we are, at least in culture, part of the same heritage as Europe or North America. Instead we chose to side with the ones who would rather burn the West (ourselves included).

It is truly a regrettable phenomena that we as Latin Americans feel a closer bond to the Arabs who are wrecking Europe than to our own “mother”, which is Spain or Portugal. We have decided to throw a childish tantrum, and now that tantrum further endangers our own mother.

South and Central America have a common culture, religion and language, and all of that was given by Spain, but now here we are throwing our tantrum, instead of siding with our brothers and sisters on the other side of the Atlantic. We keep thinking ourselves part of the Third World, a group created by disgruntled socialists who did not agree with the Soviet Union, nor like the West. A small group of people who wanted to use the peoples of the global South as a World Proletariat who would rise up against a World Bourgeoisie represented by both superpowers of the time. now this so-called Third World is a mess, and Latin America, which already had a grudge against the United States since the beginning, has taken in the narrative of the “Great Evil White Man” while thinking herself as a victim.

That is pure and unadulterated nonsense. A century ago, we saw ourselves as a culture that descended from Spain with influences from other parts of the West. We thought ourselves as part of the West. We used to see in Spain a mother, and in Europe our family. We have been brought down. The instability in the first half of the previous century kept us sidelined and impoverished. Now we don’t look up to Europe as a child looking up to an uncle, but we look at them with greed. We don’t allow ourselves to think that we are the children of the brave men who fought the Reconquista; instead we shun them as barbarians and claim to be children of the American aboriginals, wishing to shed the entire Hispanic Heritage. We are a people who tries too hard to not be seen as part of the West because we have convinced ourselves that “the West” represents the “evil white man”. And we have convinced ourselves that we are part of the “global South” in such a situation. We feel a closer kinship with the Arabs, eternal victims of their own ideology, rather than with the Spaniards, with whom we share a language, most of our culture, and, up to a while ago, a religion.

Latin America should step up. I hope that when the War comes — because I think that it is too late to save Europe in a peaceful way, sadly — Central and South America will rise up and aid our brothers and sisters, at least on the Iberian Peninsula… Unfortunately, I do not see that as realistic. Unless the enemy attacks on our own soil before gaining the victory in Europe, we will not march to their aid, and even then it will be reluctantly.

I wish that this part of the world would wake up. For too long the corruption and the later socialism mixed with it have kept us impoverished. For too long we have bought the socialist narrative and agenda. It is time for Latin America to reclaim her true place as part of the West, for us to see ourselves not as victims but triumphant.

Maybe it is time to recover the old banners, not those of Bolivar and San Martin, but those of Charles V and Phillip II, to bring back the banners of a time when all of the Hispanic peoples were united by the King, the Cortes and the Church. Not to bring back this old dead empire, but to create a new kinship with the nations that gave us so much.

Maybe then we as Latin Americans will finally be able to get rid of the pains that we have suffered since our independence. Maybe then we will stop being the pariahs of the West and finally be equal to the rest, as intended.