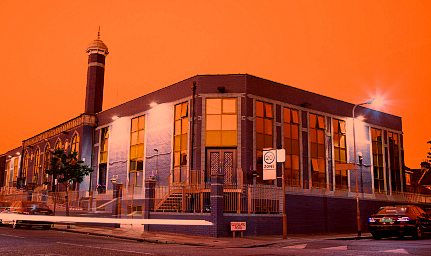 Ilford is the culturally enriched suburb of London where the firebrand preacher Anjem Choudary once had a crash pad. It is also the latest British municipality to feature a local media report in which members of parliament call for the director of public prosecutions to investigate and shut down Gates of Vienna.

One of the two Labour MPs mentioned in the newspaper report is a recently elected fellow named Wes Streeting (whose predecessor happened to be Jewish). Mr. Streeting is reportedly gay. Does he believe that his Muslim colleagues will give him a special exemption when — with his help — sharia becomes the law of the land in the UK?

The trickle-down effect from the Hate Not Hope “report” is interesting. It starts at The Independent — which, as far as I can tell, never published anything, despite their threatened “deadline” — then moves to The Guardian. From there it travels down the journalistic food chain to the locals, first Bradford, and now Ilford. Where next? There are three remaining MPs who want to bung us in chokey, so maybe their local papers will be next.

Here’s the story in the Ilford Recorder, which simply takes the word of HnH and the Grauniad about Gates of Vienna. It quotes Mr. Streeting to the effect that we’re the equivalent of an “ISIL training website”. Also: our blog is still “believed to be hosted on British servers”:

Labour MPs Wes Streeting and John Cryer have asked for an investigation into a website, which Mr Streeting says “has the potential to cause a repeat of the Norway massacre”.

According to The Guardian, six opposition MPs, including Ilford North MP, Mr Streeting, and Leyton and Wanstead MP, Mr Cryer, wrote to the director of public prosecutions (DPP) asking whether The Gates of Vienna website breaks the law.

The website heavily promotes an exhibition in central London, in September, containing cartoons of the prophet Muhammed, which could be designed to incite Islamist violence.

The event has been organised by former Ukip parliamentary candidate Anne-Marie Waters.

Mr Streeting told the Recorder: “It is really clear that the website makes no bones about being a far-right website designed to incite hatred against Muslims.

“It has the potential to cause a repeat of the Norway massacre with Anders Breivik and that is why I have referred it to the DPP.”

The name of the website refers to a battle in 1683 between Europeans and Muslim Ottoman forces.

It details how anti-Muslim paramilitary groups could operate in a future war against Islam.

Mr Streeting said there was no difference between this website — believed to be hosted on British servers — and a jihadi training page.

He explained: “As the tragic events in Norway show, we cannot be complacent about the far-right.

“We need to treat this as we would treat a ISIL training website and get it shut down.”

While I was visiting the newspaper’s website, I noticed a sidebar item that says Ilford is the second unhappiest place to live in the UK. Is there a connection between these two stories? You decide.

Hat tip: Margita, in the comments.

33 thoughts on “Ilford MP Says: Shut Down Gates of Vienna!”