Joost Niemöller’s latest essay takes a look behind the scenes in the “migration” crisis, paying particular attention to the role played by Qatar in expediting the movement of Muslims from North Africa and the Middle East into Europe.

Many thanks to GB for the translation. 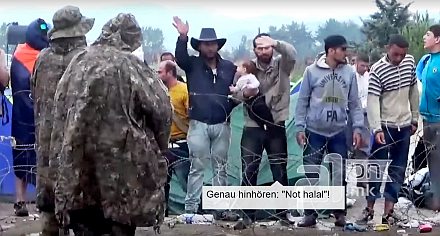 On the Al Jazeera website we found a comment about the illegal immigrants flooding Europe[1]. According to AJ, we are not allowed to speak about “immigrants”, because they are “refugees”:

So far this year, nearly 340,000 people[2] in these circumstances have crossed Europe’s borders. A large number, for sure, but still only 0.045 percent of Europe’s total population of 740 million.

Contrast that[3] with Turkey, which hosts 1.8 million refugees from Syria alone. Lebanon, in which there are more than one million Syrians. Even Iraq, struggling with a war of its own, is home to more than 200,000 people who have fled its neighbour.

Al Jazeera is the state-funded broadcaster in Qatar. Qatar itself takes in ZERO “refugees”, just like the other filthy rich Gulf countries, according to Amnesty.[4].

Nevertheless Qatar wants to teach us a politically correct lesson.

In reality, there is a plan behind the recent movements of these hordes.

The main origin of the panic in the Middle East is ISIS, whose sophisticated and professional PR apparatus has made it abundantly clear that the mass movement of people towards Europe is part of their strategy.

ISIS plays with the “refugees”[5], shooing them away.

In the face of ISIS’ professionalism stands the distinctly amateurish treatment of terrorists by countries such as Turkey.

Turkey doesn’t seem to be interested in fighting terrorism, as explained in the revealing blog of a Dutch traveler.[6] In this “kind” of country, terrorism has a clear field.

Of course people flee: to the EU!

But a diabolical plan is behind all this.

ISIS is being funded by countries such as Qatar.[7]. Turkey provides military training to ISIS troops.[8]. The politically incorrect channel of Al Jazeera in Arabic calls for the extinction of the Alawites.[9]

Furthermore, I urge my readers to look at the pictures and clips you will NOT find in the mainstream media.

As an example, the Dutch NRC Handelsblad deliberately shows pictures of this “lone” woman, preferably with baby and behind barbed wire, as if these were spontaneous snapshots.[10]

The original, non-manipulated images show that the “desperate refugees” are in reality well organized Muslim gangs. Everything is set up. Leaders hiding behind the masses are giving signs to each other. Photogenic babies are kept on standby.

When ordered so, people refuse the Red Cross food and aid packages, because they are not halal.

Western media do show well-orchestrated plaintive stories about the bad treatment of “refugees” in Macedonia, with lack of food and water.[11]

Here in the Netherlands, our unworldly Minister Ploumen is going all-out to draw these “refugees” into our country.[12]

Have another good look at the level of organization in these images [in the videos below]. One only sees a well-meaning Western aid worker, in search of a useful media story; this is neither spontaneous nor desperate.

Migrants in Macedonia on their way to Germany:

51 thoughts on “How Qatar Propels Muslim Gangs Into Europe”