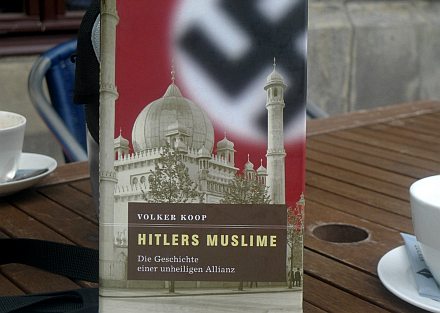 The following article concerns the rich historical and contemporary connections between the Third Reich and the Islamic world. It was written by a Dutch investigative journalist, writer and blogger named Joost Niemöller, whose work has appeared here occasionally in the past.

Many thanks to our Flemish correspondent GB for the translation:

It is well known that Mein Kampf is still very popular in the Muslim world: for example, in Egypt[1] and some Arab countries. But also in Turkey[2]. In Iran[3]. Or Pakistan[4]. Germans in the Islamic world are being addressed enthusiastically, because they hail from “The Land of Hitler”. Not so long ago I heard this again from a German friend who travels to the Middle East regularly. In the Islamic world a direct link[5] is being drawn between Hitler’s warfare and the Jihad. At the same time it’s very fashionable among Muslims to deny the Holocaust, which in the eyes of an anti-Semitic would rather damage Hitler’s status as a hero; why then still read his book? But then the denial of the Holocaust[6] is again necessary to refuse the justification for the State of Israel.

When it comes to feeding hate, logic is irrelevant.

Mein Kampf‘s popularity in the Muslim world is only one signal. Many links exist between Nazism and present day Islamism. One of the abundant examples is the fact that the fake document “The Protocols of the Elders of Zion”[7], promoted by the Nazi ideologist Rosenberg, which would be the ultimate proof of a Jewish complot to overthrow the Christian world, became popular again among the PLO via the Islamic world.

In the exhaustively documented work “Van Jodenhaat naar zelfmoordterrorisme” (“From hatred of Jews towards suicide terrorism”) by Dr. Hans Jansen (Not the same as the recently deceased Arabist), we find the description of a PLO pamphlet discovered by the Israel military that features both Rosenberg and The Protocols of the Elders of Zion. The subtitle of Dr Jansen’s book is Islamisation of the European anti-Semitism in the Middle East). He expounds the idea that the Muslim anti-Semitism before WWII was of a different nature: Jews were seen as ridiculous and virtually unimportant. They could be killed, but did not really constitute a threat. For this reason Jews were relatively left unharmed under Islam and were not forced to convert to the mainstream religion, as was the case in the Christian world.

The idea of a “Jewish conspiracy” originated in Europe and gained momentum under Hitler.

This European anti-Semitism, nourished by Hitler, seems to have been borrowed by the Muslim world after the creation of the state of Israel.

The present hatred of Jews in the Middle East is therefore based upon a European — namely Nazi — theory, and hence second-hand. The subject of the “Protocols” is the threat to the Christian world by a Jewish plot. Taking the “Protocols” for real in the Islamic world[8], as proof that the Jews are dangerous is obviously very bizarre. Why should Muslims care about the threat to the Christian world?

They don’t. It just shows the confusion that originated when the Islamic ideology became interwoven with the ideology of the Nazis.

Concerning this process, and about its military importance, at least two important books appear to have been written. The first[9] I encountered eventually this summer in a library in the German city Oldenburg. Apparently it had not attracted much attention and was solidly discounted. The second[10], more recent, did generate some serious discussion, I found out via Amazon.

Of course it is characteristic of the existing politically correct climate that such thoroughly researched and well-founded historical works do not constitute part of any basic debate about Islam in the mainstream media. Presently Islam is part of an obsolete multicultural society; anybody criticizing this is a kind of Nazi. That the truth is in fact the other way around is a very unwelcome message: both Islamic and Nazi ideologies not only have common elements, but also have a common history. This continues today and by itself provides enough reason to dig further.

Yes, we know that Mein Kampf is popular in the Muslim world.

Yes, we know Amin el-Husseini[11], the Jew-hating Jerusalem Mufti, who was linked to the Muslim Brotherhood and who hooked up with the Nazi empire. We know that one picture of his meeting with Hitler. We know that after the war he was left unpunished and remained active in the Middle East.

The popularity of Mein Kampf in the Middle East is no coincidence.

Amin el-Husseini was not just a bizarre anomaly.

The broad distribution of the “Protocols of the Elders of Zion” in the Muslim world is part of a bigger picture. In that picture, Hitler plays a leading role.

27 thoughts on “Hitler and Islam”