Below is the second part of an essay about the Nazis and Islam by Joost Niemöller. It has been translated from the Dutch by GB. Part 1 is here. 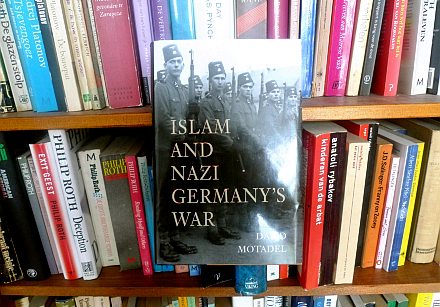 Hitler and Islam (2)
by Joost Niemöller

What about Hitler himself and Islam? To answer this question, it has to be pointed out that Islam in Hitler’s time was quite unimportant. The Ottomans were practically chased from Europe with the first Balkan War[1], and with Atatürk (admired by Hitler[2]) and the Young Turks[3], a secular movement emerged. In the new Turkey, nationalism was more important than Islam. Hitler shared this nationalistic ideology, hence the admiration[4] among Nazis and Hitler for the dictator Atatürk and his modernization movement.

What Hitler (under Himmler’s influence) was seeking in the Islamic ideology was a uniting ally, as David Motadel describes with many examples in his Islam and Nazi Germany’s War[5]

So this uniting ally had to be Islam. But Hitler’s problem was not only the lack of enthusiasm among Turks for this “world-Islam”. Muslims could hardly be united, which turned out to be a big problem at the Dresden school for imams: there a pan-Islamic vision was being taught, but Persians, Pakistanis, Turks, Arabs and not the least Sunnis and Shias couldn’t be gathered in the same classroom!

Hitler and his gang got support from the Bosnians, who were fighting the Russian-allied Serbs, and from Muslim peoples in Russia, who were suppressed under Stalin, as there were the Crimean Tatars[6] and the Islamic peoples from the Caucasus. In those areas some SS units were established, however with more propagandistic than military importance.

Despite the initial victories of Field Marshal Rommel in Northern Africa[7], the Nazis did not succeed in creating a structural stronghold in the Arab world. Also the attempts to organize an Islamic uprising against the British in India failed. This was partly due to the fact that the British, French and Soviets did not fight an ideological battle against Islam. Just as the Dutch in the Dutch East Indies, they were very conscious of the danger of Islam (read Snouck Hurgronje[8]) and smart enough not to engage into an ideological confrontation that could only inflame the Islamic consciousness.

During the days of the Nazi ideology, Muslims were “locked” in their ethnic and nationalistic division. The present Islamic movements such as the Muslim Brotherhood in Egypt, with their predilection for Nazism[9], were not yet developed[10], not to mention Al Qaeda or ISIS.

In those days Islam had two faces: ethnic and nationalistic.

That was a problem for Hitler. Ironically, the Nazis, with their Pan-Germanism, also pursued an ethnic and nationalistic community.

Beside the chaotic combination of Fascism, National Socialism and Nazism, there was indeed another ideology that Hitler tried to realize for a higher purpose; hence his affinity with the Japanese, Italians and Spanish. Different races, same ideology. Also with Muslims, whom he considered less important. The ideological similarities between Nazism and Islam are obvious:

These similarities were to be exploited by both Nazi and Islamic ideologists. This is described in much detail in Islam and Nazi Germany’s War. Here we must emphasize that Islamic ideologists were totally unimportant in the Nazi empire. They were Hitler’s puppets, and curiosities. Hitler was quite positive towards Islam, but did not find it worthwhile to embrace it as a real alternative. He also looked down upon Turks, Arabs etc. as a race.

For example, you won’t find Islam as a serious subject in Hitler’s excessively detailed biography by Ian Kershaw[11], nor in other biographies by John Toland[12] or Werner Maser[13]. This is not because Hitler wasn’t intellectually “hungry” :Timothy W. Ryback wrote a very interesting book, Hitler’s Private Library[14]. According to Ryback, Hitler was an obsessive reader of subjects such as military history, old myths, the occult, Christianity, art, architecture. Here Islam is not even mentioned.

It is true that Islam is mentioned a few times in Hitler’s Table Talk.[15] [PDF]

However in Mein Kampf,[16] [PDF] now so popular in the Muslim world[17], Islam is not even mentioned, and the term “Mohammedanism” only in an insertion that is talking about Christianity. Muslims were irrelevant friends. And Islam was interesting as a better variety of Christianity[18] .

In the same way the influential Nietzsche considered Islam an improved version of despised Christianity, so did Hitler. Hitler was not an atheist (neither was Nietzsche), but he had ethical objections to Christianity. Christianity was not ready to fight.

Without Christianity, we should not have had Islam. The Roman Empire, under Germanic influence, would have developed in the direction of world-domination, and humanity would not have extinguished fifteen centuries of civilisation at a single stroke.

The fact that the Japanese have retained their political philosophy, which is one of the essential reasons for their successes, is due to their having been saved in time from the views of Christianity. Just as in Islam, there is no kind of terrorism in the Japanese State religion, but on the contrary, a promise of happiness.

Only by the end of the war did he regret having underestimated Islam’s importance. He admitted to having overplayed his hand with the useless Italians with their colonial ambitions in North Africa, thereby unnecessarily alienating the Muslim population.

But according Motadel, Hitler never had a serious ambition to liberate the Muslim countries controlled by the Russians. Volker Koop underscores this aspect in his Hitlers Muslime[19]: Hitler deceived the Muslims with promises of liberation. In the Table Talk he fantasizes about the Crimea as a future German colony, not as an independent Muslim country. In their counter-propaganda in the Muslim world, the British eagerly pointed out that Hitler considered Muslims as “Untermenschen” (A viewpoint that they actually shared…)

Hitler was not always positive in his comments about Muslims. In his Table Talk he viewed them historically as one of the groups that tried to overrule the European civilization:

First of all it was the Greeks attacked by the Persians, then the Carthaginians’ expedition against Rome, the Huns in the battle of the Catalaunian Fields, the wars against Islam beginning with the battle of Poitiers, and finally the onslaught of the Mongols, from which Europe was saved by a miracle — one asks what internal difficulty held them back. And now we’re facing the worst attack of all, the attack of Asia mobilized by Bolshevism.

But the diabolical dreamer was once more inconsequent. In the same Table Talk he at one point fantasizes about what would have happened if Charles Martel had NOT won the Battle of Poitiers. Then the whole of Europe would have converted to Islam, the ideology of “heroism” would have ruled, and the Europeans could have repressed Judeo-Christian morals, resulting in the Germanic Race obtaining the gift of world power.

Then, with the advent of Christianity, came the barbarians. The chivalry of the Castilians has been inherited from the Arabs. Had Charles Martel not been victorious at Poitiers — already, you see, the world had fallen into the hands of the Jews, so gutless a thing was Christianity! — then we should in all probability have been converted to Mohammedanism, that cult which glorifies heroism and which opens the seventh Heaven to the bold warrior alone. Then the Germanic races would have conquered the world. Christianity alone prevented them from doing so.

And here we hear a very clear echo of Nietzsche in The Antichrist:[20]

If Islam despises Christianity, it has a thousand fold right to do so: Islam at least assumes that it is dealing with men… Christianity destroyed for us the whole harvest of ancient civilization, and later it also destroyed for us the whole harvest of Mohammedan civilization. The wonderful culture of the Moors in Spain, which was fundamentally nearer to us and appealed more to our senses and tastes than that of Rome and Greece, was trampled down (— I do not say by what sort of feet —) Why? Because it had to thank noble and manly instincts for its origin — because it said yes to life, even to the rare and refined luxuriousness of Moorish life!… The crusaders later made war on something before which it would have been more fitting for them to have groveled in the dust — a civilization beside which even that of our nineteenth century seems very poor and very “senile.” — What they wanted, of course, was booty: the orient was rich…. Let us put aside our prejudices! The crusades were a higher form of piracy, nothing more! The German nobility, which is fundamentally a Viking nobility, was in its element there: the church knew only too well how the German nobility was to be won…. The German noble, always the “Swiss guard” of the church, always in the service of every bad instinct of the church — but well paid…. Consider the fact that it is precisely the aid of German swords and German blood and valour that has enabled the church to carry through its war to the death upon everything noble on earth! At this point a host of painful questions suggest themselves. The German nobility stands outside the history of the higher civilization: the reason is obvious…. Christianity, alcohol — the two great means of corruption…. Intrinsically there should be no more choice between Islam and Christianity than there is between an Arab and a Jew. The decision is already reached; nobody remains at liberty to choose here. Either a man is a Chandala [Sanskrit, an untouchable whose task is to dispose of corpses] or he is not…. “War to the knife with Rome! Peace and friendship with Islam!”: this was the feeling, this was the act, of that great free spirit, that genius among German emperors, Frederick II. What! must a German first be a genius, a free spirit, before he can feel decently? I can’t make out how a German could ever feel Christian…