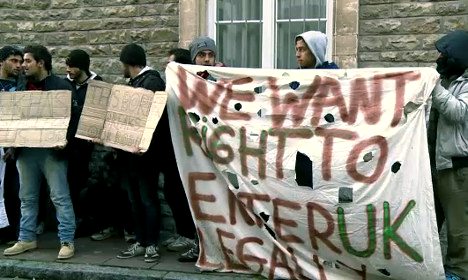 There’s been a lot of news coverage lately about the immigrant crisis in the area around Calais, where illegals almost continuously attack the entrance to the Channel Tunnel in their attempts to get to the Promised Land, a.k.a. Britain.

The following video from Riposte Laïque describes another facet of the same crisis: the plight of native French people whose lives are being disrupted — if not destroyed — by the hordes of Third-World barbarians camped almost on their doorsteps.

Below is the essay that accompanied the video. Many thanks to CB Sashenka for the translation, which was posted earlier at Vlad Tepes in a slightly different form:

The Shocking Testimony of a Calais Resident Surrounded by 3,000 Illegal Immigrants

This government is the dregs of our country, the shame of our nation!

To Hollande, (President of France) Valls, (French Prime Minister) Cazeneuve, (Minister of Interior) Taubira, (Justice Minister) and their associates, and all the others who allow the French to live in fear because of your thoughtlessness and your submission to superior diktats from foreign countries not worth mentioning, you submit the people to hordes of barbarians that come from who knows where, individuals whom the media portray as unfortunate victims of war so that they can be fed on the money of those whom they terrorize.

The testimony of two Calais residents, a mother and daughter, frightening in its harshness, in its horror, heart-rending in its sincerity, in the traumatic silence of an unfortunate Calais resident found one day holed up in her basement, terrorized by rioting illegals whom even the police are afraid to approach.

Her daughter tells all, bluntly, frantically, in a hurry, in anguish. And she accuses. She accuses these good-for-nothings, these jackasses, these government pieces of garbage for allowing this evil in, destroying everything in its path.

Bastards that you are, bad guys, despicable turds!

This woman courageously tells, in a few minutes, the inconceivable, the extreme poverty of her mother, the security she had to enforce around her house that’s missing only a watchtower, the games of the illegal immigrants who are having a good time forgetting that they were asked to look sad and haggard, the inaction of police officers and their council to do their job for them with the added lawsuit risk on top of everything. Thank you Taubira! (French minister for justice)

And those French who suffer the reprisal, the aggression, and who are asked to pay, to pay and pay, over and over again, until they bleed, until there is no longer enough to eat, so that others may live high off the fat of the land at our expense and afford the latest smart-phones, so that they can enjoy the space just around the corner from you to play soccer while you’re closing the fourth lock on your armoured door, and firefighters wait for a moment of calm before entering the forbidden city so they don’t risk their lives, with the help of police officers, the same ones who never come when they are called, when an old lady silenced by fear is in danger to the point of having to run to her cellar like a rat, when it’s her daughter who comes at 3:00am, alone, to help her.

Holland, Valls, Cazeneuve, Taubira, you’re monsters, hydras. You are not legitimate to govern my country, you are guilty of the daily deaths due to your complacency, your treachery.

And you, the French people, where are you?! Will you finally wake up from your apathy, yes or no? What are you waiting for, for your kid to be killed? How many attacks will it take for you to do something!

32 thoughts on ““France is no Longer for the French””