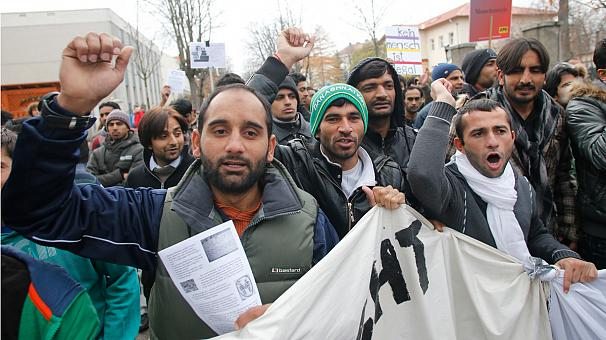 Christian Ortner is a prominent Austrian journalist and popular opinion writer. The following essay about asylum seekers in Europe was posted on his website last Sunday. Many thanks to JLH for the translation:

The Central Organ of Neo-Liberalism

Do Europeans Need Asylum in Europe?

When thinking about asylum seekers, most people picture either a boat, bobbing in the Mediterranean Sea, overloaded with black-skinned people; or a young, dark-eyed girl from Syria or Iraq. That is how most of the media illustrate their reports on the wave of immigration that is washing across Europe.

Pictures that arouse emotions in favor of a generous asylum policy, but do not reflect reality.

According to the latest Eurostat data, in the first 6 months of 2015, a notable 35% of all first-time applications for asylum seekers came from Europeans, mostly from Serbia, Kosovo, Macedonia and Albania; only 25% from the Near East, especially Syria and Iraq, and only 19% were Africans.

True, living conditions in the western Balkans are not very pleasant, certainly for the Romany people, but they are not grounds for asylum in the sense of the Geneva refugee convention (war, political or religious persecution, etc.) Recently, Serbia’s Premier Aleksandr Vucic — with little political correctness, but refreshing clarity — explained: “Those are not asylum seekers. They want German money.” Hardly to be disputed. When the average monthly income in Serbia is 380 euros, it is easy to see how attractive the German socialized state is to Serbs, to say nothing of even poorer corners of the western Balkans.

What appears to average consumers of media news as a gigantic wave washing over Middle and North Europe consists of two completely distinct phenomena which have nothing to do with each other: on the one hand, the larger number of economic refugees from the western Balkans who normally should have no claim to asylum; on the other, a smaller number of actual war refugees from Syria, Iraq and several African states torn by civil war. However, because these strands are mixed together in both politics and the media, the discussion has become completely irrational.

It would make sense to use all means possible to stop the almost wholly economically driven immigration from the western Balkans, thus simultaneously relieving some of the immigration pressure on the EU and being able to take proper care of the real war refugees.

Wanting to solve the economic problems of the former Yugoslavia by importing a part of its populations as pseudo asylum seekers is tantamount to wanting to blow up the country from the inside.

Distinguishing precisely among the various motives of immigrants is considered cold and heartless, but there is no other way to get control of the problems caused by immigration.

6 thoughts on “Do Europeans Need Asylum in Europe?”