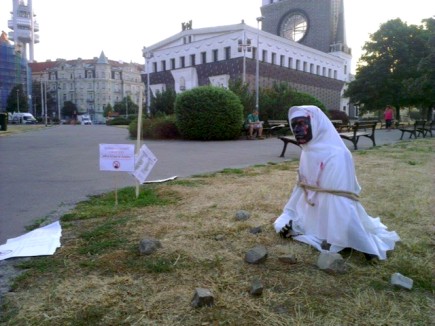 Popular sentiment against further Muslim immigration into the Czech Republic is increasing. The latest manifestation of resistance is a series of exhibits in the public parks of Prague, featuring veiled female effigies representing women who have been stoned to death under Islam.

Our Czech correspondent Margita, who sent the tip about the article, includes this note:

It appears that the Czechs continue to be ‘original’ in their fight against Islam. When talking to my friends they all seem to be pretty suspicious about the ‘religion of peace’…

The following report was published at ČeskéNoviny.cz. It’s refreshing to read that the police in Prague “have not come across any breach of the law” on the part of those who created the exhibits. What a far cry from the oppressive situation in Sweden or the UK!

Statues of Stoned Women Are in Prague in Protest Against Islam

Prague — The followers of the We Do Not Want Islam in the Czech Republic and the Bloc Against Islam groups this morning installed the torsos of the women stoned to death in order to warn of the danger of Islam, Prague police spokesman Tomas Hulan has told journalists.

The effigies covered by white cloths tainted with colour as blood and surrounded by stones have appeared in a number of places in Prague, Hulan said. 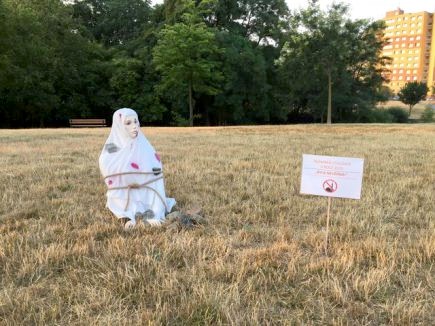 The police are dealing with the affair, but they have not come across any breach of the law, he added.

The installations include the captions such as “Pregnant after Rape” or “She was unfaithful” pointing out the alleged reasons for being stoned to death.

The statues of the women stoned to death are to warn of Islamic barbarism and the violence committed against women, Artur Fiser, spokesman for We Do Want Islam, told CTK.

“Islamic barbarism is infiltrating us with a growing speed, but it has not touched upon majority society,” Fiser said.

“We hope that if we open the eyes to the public before it gets here in full, people will not have to watch real stoning or read in the papers that a neighbour killed his daughter over the perverted notion of ‘honour’, Fiser said.

We Do Not Want Islam in the Czech Republic has staged a number of anti-Islamic events, but its followers are mainly active online, the Interior Ministry has said.

It is regularly mentioned in the ministry’s reports on extremism where it is called a part of the extreme right.

Larger photos may be found accompanying the original article.

26 thoughts on “Czechs Protest the Stoning of Women Under Islam”