As a follow-up to his essay about last Monday’s bombing in Bangkok, H. Numan has kindly provided this background summary of Thai politics over the past two decades. 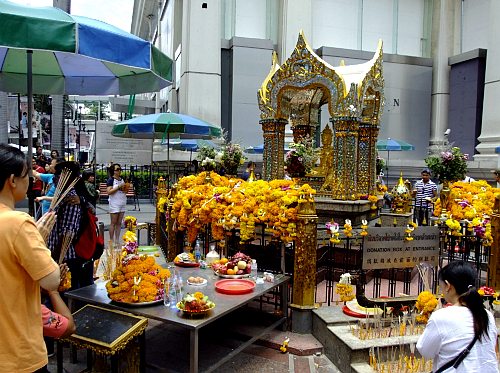 About the reds, yellows and the south
by H. Human

“Objects in mirror are closer than they appear” — in Thailand you can change that into “Objects in Thailand are much different from what they appear to be”. During the various unrests in Thailand, demonstrators were carrying two sorts of banners: in English and in Thai. Those in English called for more democracy, those in Thai called for something very different. Usually something pro or against Thaksin. Western journalists can’t read Thai, and assume the English banners were translations. They were nothing of the kind. 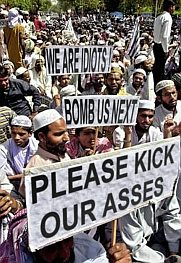 The first thing you have to understand is that the colors of political factions in Thailand have very little to do with Western political and color conceptions. They are related to the colors of the day, or what His Majesty the King was wearing.

Every day has its color. Monday has yellow. The king was born on a Monday, therefore the royal color is currently yellow. Long before the problems began, the Ministry of Education ‘suggested’ teachers should wear yellow shirts on Mondays to honor the king. This idea caught on nationwide, and for a while you saw just about everybody wearing yellow shirts on Mondays.

Later this color was picked by PAD movement, the Yellow Shirts.

When the king left hospital wearing a sky blue jacket, the very next day people began wearing sky blue shirts. The queen’s color is blue; the crown prince’ color should be yellow (he was also born on a Monday) but he has chosen a darker hue of blue. He can’t use yellow; that is the king’s prerogative.

As you can see, colors have nothing to do with Western conceptions of color. It has everything to do with how Thais view colors, and that relates to religiously auspicious colors and royalty.

The Red Shirts are supporters of the ousted PM Thaksin Shinawatra. He was removed by a (bloodless) coup in 2006. The movement called itself is named UDD or United Front for Democracy against Dictatorship. The color red has nothing at all to do with socialism, and they are just as loyal subjects to the king as the Yellow Shirts are. At best, red stands for power and/or revolution. Definitely not to remove the king, only those that surround him.

The Red Shirts are loosely allied with Thaksin Shinawatra. Yes, he hired them to occupy Bangkok’s center in 2010. For Bt 500 ($14) per day per person, including food and transportation. Yes, the Red Shirts are to be found mainly amongst the rural poor and to a lesser extent the urban poor. But they do have their own agenda. That agenda is simply: who pays the most for my vote?

Thaksin differs very little from the established politicians and parties. Only in that he delivers what he had promised. He gave poor Thais some basic health care in the Bt 30 program. Each visit to a doctor and some treatment costs Bt 30 ($ 0.80). Not everything is covered, but it’s at least something. The other political parties promise the moon, and never deliver anything. So who would you vote for? The Red Shirts know very well Thaksin is every bit as corrupt as the rest. He just pays better. That’s all.

That’s a bit more complicated. The People’s Alliance for Democracy started as a protest against Thaksin. Who, while being prime minister, as a private citizen sold one of his companies (Shin Corp) to a Singaporean company. This was legal, as the PM (Thaksin) made a law to allow for that. The Thai owner (Thaksin) didn’t have to pay taxes on the transaction, as the PM (Thaksin) gave him a tax exemption for it. Nor was the sale illegal, as the government (Thaksin) didn’t see selling the national mobile network as a strategic sale.

This enraged just about everybody. We don’t need foreigners to sell our country, we can do that very well ourselves! You could hear that everywhere, but by far the most vocal cry was in Bangkok itself. Amongst the middle classes, and the middle class Chinese-Thai in particular.

The original Yellow Shirts were middle-aged middle-class ladies from Bangkok. Their businesses were hit the worst by the 1997 recession and consequent recovery under Thaksin. This quickly changed into a mass movement, based in Bangkok. Thaksin’s greed cost him a lot of his support, rural and urban. However, what started as a spontaneous mom-and-pop operation evolved into an extreme conservative royalist movement.

Lèse majesté is a very serious crime in Thailand. Only days ago three persons were sentenced to 30, 28 and 5 years respectively. The first two for posting something on Facebook. Do mind that the courts were lenient because the culprits admitted guilt. Otherwise, the sentences would have been doubled.

The current trend of trials was started by Thaksin. Anyone criticizing the prime minister (Thaksin) indirectly criticized the king himself, as the prime minister was appointed by the king. This, of course, is a very convenient way to silence any opposition. A trend that was continued by all succeeding governments.

This change led to the demise of the Yellow Shirts as a popular movement. Most people love the king, and do that sincerely. After unknown sources supplied the movement with money and power, the original moms and pops moved out of it. I haven’t heard a thing about the Yellow Shirts for a long time.

Thailand is a Buddhist country, but not 100%. Three provinces in the deep south, bordering Malaysia, are Muslim. The sultanate of Pattani was conquered by Thai kings in 1785. Ever since then the south has been used as the Thai equivalent of Siberia. Any civil servant misbehaving in Bangkok (and one has to be pretty creative to stand out from the competition!) was send in exile to the deep south, and allowed to do whatever he wanted there.

The people are different, they are related to the Malays across the border. Much darker-skinned than most Thais. They speak Malay rather than Thai, and are Muslims, not Buddhists. They never liked being used as the deportation pit for bad civil servants. Or always holding the short end of the stick, no matter what.

During the sixties across the border raged the Malayan Emergency. This could have ended much sooner, had the Thai government not kept both eyes closed to the communist insurgents. As long as they behaved themselves in Thailand, they didn’t mind them being there. Malayan and British troops were not allowed to cross the border.

The area has always been a bit of Thailand’s Wild West, ever since Thailand took it over. Real problems erupted after 2001. That’s partly due to cultural differences, religious difference and also some (Buddhist) Thai encroachment. Muslims don’t like that at all. Not when they are being encroached, that is. The local economy is better than that of Thailand’s northeastern provinces (the Isan area), so quite a few people have moved to the South. The area is very slowly but surely being taken over by Buddhist Thais.

Since 2001, there has a full state of emergency with daily attacks. The local terrorist signature is beheading, whenever time permits. Preferably alive, but they aren’t picky. If they have time left before security forces move in, they happily behead a few already dead people as well. They rarely claim attacks. 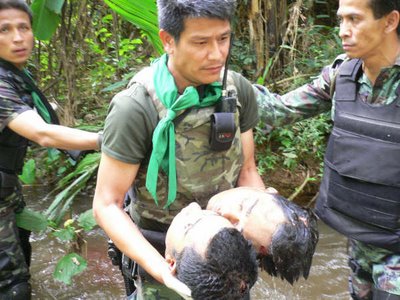 The Malay government isn’t exactly laughing out loud, but let’s say that they discreetly grin. Of course they remember the Malayan Emergency. But they also have to consider that a lot of insurgents have families on both sides of the border and are Muslims. Closing the border will not sit well amongst locals on both sides.

This has been going on for fourteen years, and at the moment things seem to be in a kind of deadly stalemate. (Buddhist) Thais aren’t going away, the Thai army can’t defeat the insurgents, nor are the insurgents capable of achieving any goal. The only success they ‘enjoy’ is making the area ungovernable. 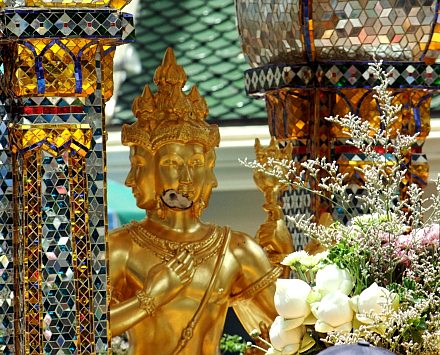 I took a few pictures this morning, you can see the damage on the Brahma statue. The Erawan shrine [see the photo at the top of this post] is open as usual; police and army presence is surprisingly light.

8 thoughts on “About the Reds, Yellows and the South”